I Ran Three Marathons in a Year. Here’s What I Learned. 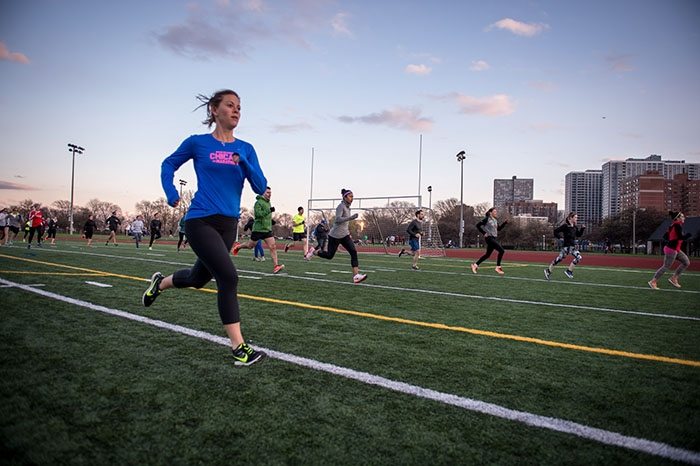 As has been documented many times on this site, I never harbored secret dreams of running a marathon. Actually, I’m pretty sure several of my friends have received text messages that say something along the lines of, “If I ever become one of those people with a 26.2 sticker on my car, you can hit me.” However, once I signed up for my first marathon last year, I was kind of hooked. I had a dream-like race day, and I wanted to replicate that as soon as possible.

So, a mere week after my first marathon, I signed up for my second – a hometown marathon that was happening for the first time, and one that I was excited to run for its scenic views and the fact that I’d have my family right there. But that marathon actually ended up killing me, and despite one of the best training cycles I could have asked for, I fell way short of my previous time and didn’t even come close to the PR I trained for.

So, about a day after my second marathon, I signed up for my third – a random race in Michigan the week after the Chicago Marathon, with a reputation for a flat course and friendly race director. I constantly doubted myself during my training and I came down with a viral disease the day before the race that made my feet itch and feel like I was running on pins and needles for four hours, but at the end of the day, I got my PR (much to the relief of my friends, family, and boyfriend, who probably don’t want to hear me talk about marathon training again for a long time).

Since I’ve gone from 0-78.6 real quick (real quick), I’ve learned a few things – about running, about marathons and about my personality in general. Here’s my wisdom.

One of the most consistent thoughts that springs to my mind during marathon training is a simple “Whoa, my body is crazy, yo.” Yes, in that exact wording. Two years ago, running seven miles was enough to make me sore the next day. Since then, my body has trained and adapted itself to be able to run 20 miles at a time without any significant side effects. Sure, it took me time and a lot of hard training to work up to this, but I’ve pushed my body beyond what I ever thought could be possible. I will never stop being in awe of the things my body can do, and I will never stop being grateful for the ability to run for four hours at a time (even if it’s the absolute worst while I’m doing it).

It Takes a Village

Running is technically a solo sport. Marathon training is not. Even if 70 percent of my runs were individual, I constantly needed the support and encouragement of friends, family and fellow runners.

I would have skipped at least one training run per week if it wasn’t for my running girl gang making plans to meet at Oz Park at 6:30 am. I could have weaseled my way out of my long runs if it wasn’t for the Nike Pacing crew and their weekly long runs out of the Nike store downtown. I would have gone crazy if I didn’t have friends to vent to over Gchat about not wanting to go for a run, and then be able to check in with them after the run and say “Well, that wasn’t as bad as I thought it would be.”

I could have blown off the random Michigan marathon if it weren’t for race director Don Kern’s inspirational weekly emails. I might not have made it to the starting line last weekend if it weren’t for my best friend Chelsea listening to me worry that I was dying, promising to take me to the ER if it turns out that I was in fact dying, and then laying down next to me in a twin-sized bed and talking me through shavasana in a valiant effort to distract me from my itching feet. I wouldn’t have even crossed the finish line when I did if I hadn’t seen Cass ahead of me with approximately .2 miles to catch her and finish the way we started this whole journey – together.

I couldn’t have done it without the help of everyone else in my corner. Thanks, guys. I owe my race to you.

You Can Adjust Your Training Plan and Still Finish

Previously, I would have considered the week a failure if I missed one of my training runs. This time, I considered the week a failure if a run got in the way of something I had planned with my friends or family. You don’t “fail” a marathon if you don’t check off every single box along the way. The training cycle and the race are way too long for that to even be possible.

Some weekends, life gets in the way. Maybe your best friend plans a bachelorette party for the weekend you have a 12 miler, or Labor Day weekend falls during your 16 miler and you just really want to go to the lake with your friends. Sure, if you can fit in your long run somehow, that’s ideal. But if you can’t, it’s not going to make or break your race to miss a long run here and there. You have to trust your training.

Mental Toughness is Indispensable to Marathons

Everyone has their “kill me” stretch during a marathon. For some people, it’s the beginning few miles of the race, when the finish is still four hours away. For others, it’s miles 16-18, when you’ve already run more than half of the race but can’t quite start counting down the miles yet. For me, it’s miles 21 on, when I’m starting to be in physical pain and still have around 45 minutes left of running. These minutes are interminable, and it’s at this time when I start having to play mind games with myself. “Okay, I’ll only check my watch after I listen to this song.” “I’ll be finished with this race in six songs.” “I have ten minutes of running left.” “What would Beyonce do?” (Beyonce doesn’t run marathons, idiot)

If you’re not mentally tough, the physical state of your body during these miles doesn’t matter. If you haven’t practiced shushing that little voice inside your head that says “That aid station looks like a nice place to quit,” or “You want to walk for a while? I know I do,” then your race is over, even if you still have a 10K left to run.

There are plenty of ways to develop mental toughness. Personally, I rely on regular torture sessions at Hard Pressed, as well as at least one “F*** It” run per training cycle. The F*** It run is a run that, for whatever reason, I REALLY do not want to do. It can be a 10 miler in the rain, an intimidating speed workout, or a 16 miler that I have to fit in before work because I don’t have time on the weekend. Whatever the reason, the F*** It run helps me develop the confidence that “if I can get through this run, I can get through a marathon.” F*** It runs suck in the moment, but afterwards, they make you a rockstar.

I’m Way Harder on Myself Than Anyone Else

Related to the previous point, I’ve realized that I view myself and my running much differently than most people view me. In my mind, I’m an average runner who’s done a few marathons, but hasn’t quite made it as a “really” good runner. If I miss a run (especially a long run), I tend to beat myself up or feel guilty about it, even if it’s because I’m not feeling well or I have something else legitimately important to do.

However, to my friends and family, I seem like a confident, dedicated runner with THREE MARATHONS! under my belt. If I miss a run, they see it as no big deal, because I already run so much and am in good enough shape that one skipped run doesn’t matter. Sure, some of that is probably due to the social media bias (you know, only posting great runs with beautiful sunrises or equally beautiful crepes), but my running accomplishments seem a lot more impressive to my friends and family than they do in my own head. In fact, a lot of times, it takes me reaching out to someone and saying, “Hey, here’s how I’m feeling about training/this run/whatever, am I overreacting or am I being reasonable?” before I realize that most of the time, I’m being unreasonably tough on myself.

There’s a time and a place for dedication and discipline, and for those training for a marathon, it’s often much harder to pull back than it is to push harder. So, whatever running goal I decide to tackle next, I’m going to make a point to go a little easier on myself and to look at myself through someone else’s eyes. I give everyone reading this full permission to smack me upside the head if I’m being unnecessarily harsh on myself.