Signing Up For Your Second Marathon: A Q&A With Someone Who’s Been There, Done That

Sometime in the last couple of weeks, I accidentally signed up for my second marathon, despite having LITERALLY just told a friend that morning that I would never do a spring marathon as long as I lived in Chicago because winter training is too horrifying. Welp. In the midst of a slight panic attack, I turned to Cass Gunderson, who has survived THREE marathons and recently killed the Detroit Free Press Marathon in 3:50:51. In the conversation below, you will see how Cass reassured me by dropping bits of cab driver wisdom and offering me advice on how to approach training for my second marathon. 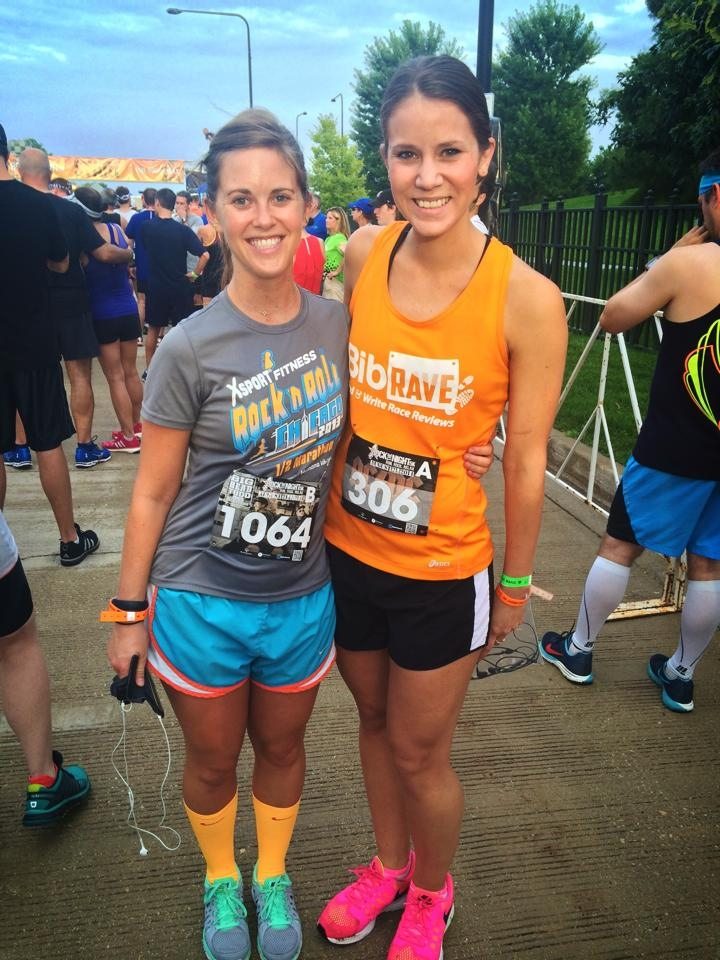 Hello, Cass. How are you at this exact moment?

I’m not exactly sure how to respond to that so I’ll ignore it. You were in Austin last weekend. About how many tacos and donuts would you estimate that you ate?

How many mini donuts count as one donut? Does a gourmet donut count as a donut and a half? What is the regulation size of a taco? This is a technique I like to call avoiding the question so I don’t have to admit my shameful (read: awesome) diet choices publicly.

You are truly living the dream. Now, I have a topic that I’d like to discuss with you, and I’d like to do so in the simplest manner possible: by me asking questions and you answering them. You following so far?

Your choice of GIF is wonderfully relevant to the topic we are about to discuss below. It’s like we have ESPN or something. Let’s begin. Cass, I heard that you have done more than one marathon. Is that true?

Yes, I keep getting marathon amnesia and signing up for these things thinking that it’s a good idea (mainly due to the fact that I can consume more calories per day). I keep forgetting about all the effort, time and discipline that goes into training and the whole running for hours at a time part.

I can understand doing one marathon, because then you get to get 26.2 tattooed on your face, like a teardrop tattoo. But what possessed you to sign up for your second marathon?

That is exactly the reason why everyone should run their first marathon. That or the classic 26.2 car bumper sticker, but I personally prefer the face tattoo because it is obviously a lot classier.

But to be honest, I signed up for my second marathon because I knew that I could do better. I ran my first marathon with my brother (and admittedly slowed him down) in 2011. It was a hot race that year and I knew I didn’t put as much effort into training as I could have. When people find out you ran a marathon, even if they are not a runner and have no concept of what a “good time” is, they inevitably ask about your time. I knew in my heart that I could improve and I selfishly wanted a time I was proud of telling people. That, and I had to beat Oprah’s time. Because Oprah.

Did you feel immediately nauseous after signing up for either marathon?

I think I was a little too naïve when I signed up for my first marathon to feel nauseous. At the time, I was blissfully ignorant about how much real life effort (and waking up early) is involved. My stomach dropped a little after I signed up for my second (Chicago again in 2013). I signed up for my third (the Detroit marathon) this past fall on the last possible day at 11 pm – after I had already been training for weeks. I couldn’t pull the trigger until the very end because I was still nervous to commit. And I’m a sucker for that Indiana-Jones-last-minute feeling. That’s why I file my taxes in April.

I’ll spill the beans here: Cass, I recently signed up for my second marathon. It was sort of a spontaneous accident. I found out about a marathon that’s in my hometown and was only $80, and I kind of blacked out and signed up. I’m excited because it’ll be through 26.2 miles of horse farms in May, and I can sleep in my own bed and my dad can drive me right to the starting line, plus I’ll have a ton of friends there to watch. But, #secrets: I am so much more terrified for this marathon than for the first one. Have you experienced something similar?

First, I would argue that black outs that aren’t induced by alcohol are dangerous and you should consult your physician about this. Second, I can relate and have similar issues, so if you find anything out at that doctor’s appointment please let me know.

I think it’s normal to be a little terrified. It would probably be more concerning if you weren’t a little nervous about it – “brb, going to run a marathon again, #nbd” would be a very absurd mentality.

When I signed up for Detroit this past fall I was a basket case of emotion. Going through a break up and working long hours at the time may have contributed to that, but it’s hard to say for certain. I watched ( … for hours and hours) as 45,000 people ran the Chicago marathon the weekend beforehand. My stomach dropped. I worried I wasn’t going to get a good time, or that I wasn’t going to finish, or that I chose a race I wasn’t prepared for, or that I should have just chosen to run Chicago with my friends stupid, stupid self. I was worried that signing up for another marathon made me one of “those people”. I thought a lot of crazy thoughts like this. The fact that my body showed signs of overtraining one week out didn’t help. Also the fact that I had never been to Detroit and knew nobody there was a little unnerving. The only things I knew about Detroit were exclusively from my experience listening to Eminem and Kid Rock. Oh, and I had no solid plans of getting there and back and had no idea who I could coax into going along with me. PS, shout out to my awesome friend Sukriti for being the most loyal human ever and agreeing to come along last-minute and driving my sore shell of a body back from Detroit to Chicago. And also for feeding my stomach beer and carbs along the way.

Here’s the thing. When you start getting nervous and doubting your running/life choices, concentrate on the things you are excited about. Seeing your friends and your dad back home will be wonderful. And sleeping in your bed back home is the. absolute. best. What’s the worst case scenario? You go home and get some solid exercise and spend time with people you love. I also recommend finding people like Sukriti who will help you indulge in beer and carbs during your time back home.

I think one of the reasons I’m freaked out is because I now know all the time, sweat, blood, and tears that goes into training for a marathon- there’s no more blissful ignorance. Would you agree or disagree? Why?

The time, sweat, blood and tears are very real. I joke about them a lot to runner and non-runner friends during training, but really those are all part of the reason why I do this to myself. Our goals and dreams are not meant to be easy and they should scare us at least a little. I have a love/hate relationship with training just like I do with running in general, but all that internal struggle and external sacrifice makes reaching a finish line exhilarating. Also, I would be lying if I didn’t admit that some of my happiest moments during training last summer involved eating Nutella crepes in my bed on Saturday mornings after a long run, my body completely spent and preparing to embrace a well-deserved nap. The blood, sweat and tears require post-run pampering, after all.

Have you approached your training plans differently than you did for your first marathon? How so?

The short answer: definitely. The medium-sized answer: I’ve taken it a lot more seriously. I stick to my training plan more closely. I run with more groups of people to keep me accountable and to stay motivated. I’ve started to take post-run stretching and recovery into consideration (for the love of all things good, PLEASE remember to roll out your calves after long runs or you will pay!). You know at this point that you CAN do it, but round two is all about doing it better, faster, stronger.

Another reason I’m a little nervous is because I really want to PR, and that’s not going to be easy on a hilly course after training through a Chicago winter. Do you have any advice for training to get a PR in the marathon?

Make sure you follow a good training plan and follow it closely. Don’t skip out on strength training. Do your speed workouts. Use that dreadful elevation button on the treadmill if you have to. Speaking of treadmills, there’s actually a great setting on most called “sport training 5k/10k” under the “personal trainer” option. It mixes up the elevation over the course of 3.1 or 6.2 miles and it usually kicks my butt. But as we all know, treadmills are evil torture machines that we should avoid if and whenever possible. There aren’t many hills in Chicagoland, but I’ve heard rumors that there are a couple. Hill repeats, anyone?

My second piece of advice is to keep a lot of the same mentality as the first marathon: don’t preoccupy yourself too much with your time. It will be what it will be; the marathon is an experience that transcends just the facts and figures.

Do you have anything else you can tell me to make me feel better and confident about doing a second marathon? (Note: Please don’t say “Nah, you’re crazy” because I think that would cause me to have a mental breakdown)

Have I ever mentioned that I really enjoy unsolicited advice from cab drivers? I’m serious. The other night I was getting home from an exhausting day of work and the cab driver sympathized with me. He told me he had been up since 5 am but he wasn’t tired. I asked him what his secret was. He told me, “I have a goal. I don’t get tired because I have to wake up every day and chase it. I can’t waste my time worrying about silly things like being tired or doubting myself. I just have to keep going.”

I think that sums it up better than I ever can.

Cass, thank you. Your help has been invaluable. Will I see you at #PizzaClub this week, and/or would you like to go for a run sometime soon?

I say we go for a run AND eat pizza. #blessed

6 thoughts on “Signing Up For Your Second Marathon: A Q&A With Someone Who’s Been There, Done That”