The Perks of Being a Teacher’s Pet in Fitness Classes 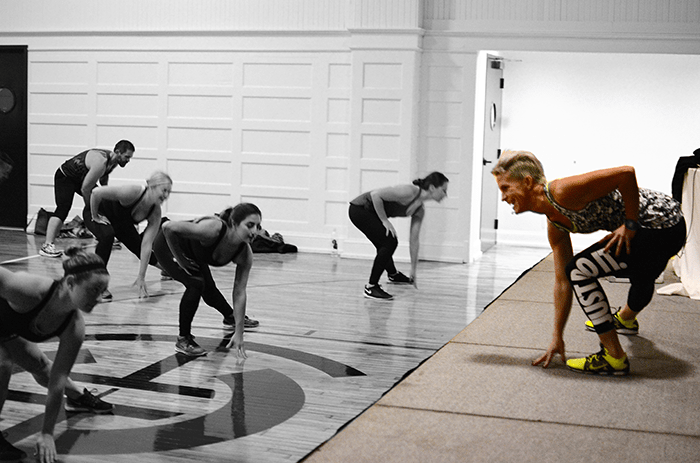 Last winter I started taking group fitness classes regularly. It had been a long time since my workout routine could be deemed regular by any measurement, but my wedding was six months away, and the vain procrastinator in me knew it was time to buck up. A girlfriend invited me to a new fitness studio for a demo class; I loved the structure and atmosphere immediately— and felt the nuptial time-bomb ticking away — so I signed up for a three-month membership.

This was when I was reminded that I can be a competitive person in situations where I have no right to be. Did it matter that I’d never taken a cycling class? Nope. I wanted to impress the teacher, so I was the sweatiest one falling off the bike by the end of my first time. And sure, my arms were probably weaker than my two-year-old niece’s, but no way in hell was I going to let the three lb. weights win during an arm section, disappointing the barre instructor who was in the techno music trenches with us.

I danced my entire life at a studio. Being the teacher’s pet there meant front-row real estate, potential solos and opportunities to teach and choreograph as I got older — I knew there was glory to be had from working hard in class. But after high school I took a five-year hiatus before my big leap back into physical activity and my body could certainly feel it in that first month back. Still, my people-pleasing tendencies trumped my severe out-of-shapeness.

The more classes I took, the more I found myself getting back in that familiar mindset, that turns pushing myself into an exciting challenge wrapped in sweat-fueled pleas for praise instead of torture. A throw away, “great tuck, Mary!” is now enough to motivate me for another 50 minutes.

In no way am I saying you should work out, or do anything in life, to gain approval from others. I’m just saying it’s been an incredible motivational tool that’s helped me. Here’s how:

Disclaimer: It helps when the instructors deserve it.

I don’t know if I’d want to desperately impress my teachers if they all didn’t deserve it, but the most part, in my experience, they have. I’ve taken classes at a few different boutique fitness studios in the city now, and though I of course have favorites, most everyone who has taught me to tuck, push, lift or whatever, has been incredibly encouraging. Finding a positive environment is an important distinction between working towards praise and becoming a pitiful Lulu-clad masochist.

I was held accountable—even when I didn’t want to be.

At first, if I signed up for a class and then bailed, I was the only one who lost out—whether that meant a late cancel fee or simply cheating myself out of a workout. But after I got to know a lot of my instructors, if I happened to sleep in or miss a class I was a regular at, I (playfully) got called out for it.

I had my own little support system.

Admittedly, I am not the most outgoing person in new situations, but slowly — and painfully — squatting my way into good graces with my instructors helped me open up and chat more both with them and others in the class. That’s how they’d discovered I was getting married, and kept tabs on dress fittings and pre-wedding festivities with me as the day got closer.

And in that moment, I swear I was more determined.

In classes where I’ve curried favor with instructors, I get pushed harder. They’ve seen me work hard, so when I slack or feel like having a lazy night, they know I’ve got more to give, and they make me give it. Of course In the moment I hate it, but in the long run, I’m stronger for it.