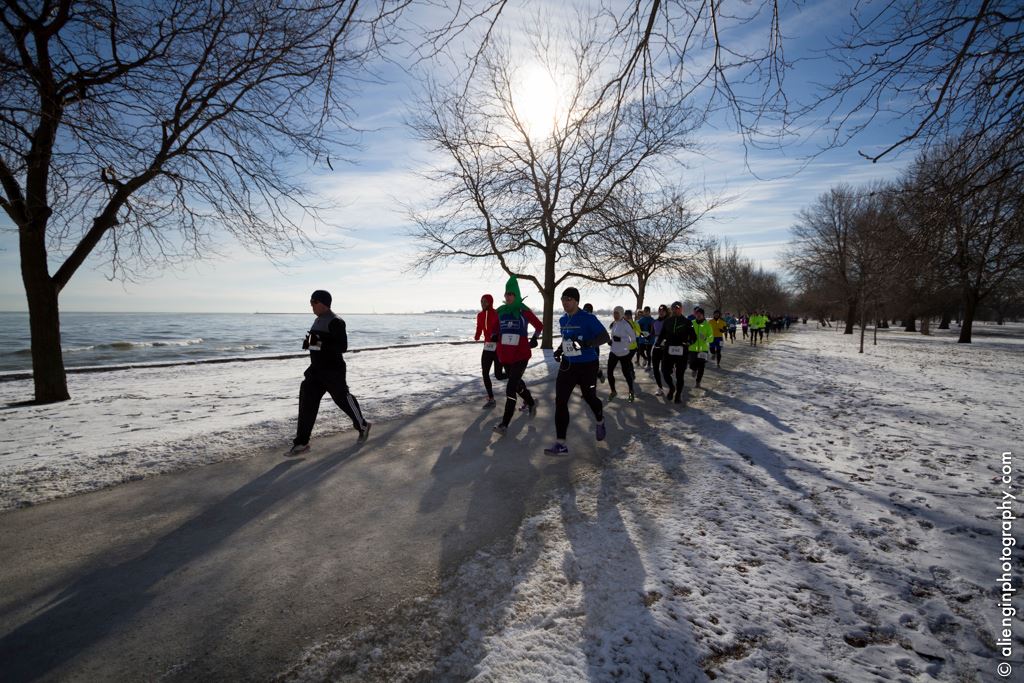 Kimberley Stedman didn’t set out to be the director of a race with the f-word in the title, but little by little, she started and grew Chicago’s favorite winter race: the F^3 Lake Half Marathon.

That happy accident all started in 2009 at a fun run where Stedman said that she and a group of friends were discussing all of their travel in the name of winter running. As glamorous as it sounds, they were tired of having to go so far to race.

“We decided to make our own half marathon so we didn’t have to travel,” she said remembering how they chose the name. “We said, ‘Let’s call it the F*c%ing Freezing Frozen Lake Half Marathon, how hilarious are we?’ And then we started the Facebook group that night.”

What started with invitations to five or six friends to a Facebook group ballooned into 100 people who were raising their hands to race in the cold.

“I never thought it was really going to be a thing,” she said of the race, which now takes over Soldier Field every January.

Lesson one: Give the people what they want.

Stedman was pretty sure she was joking when she started the Facebook group, but she realized that she was in a bit of a predicament – there were 100 people in that group who thought they were actually going to run an outdoor January half marathon in Chicago.

Realizing she needed to make the race happen, she told her trainer about the race that she accidentally planned and her reluctance to host strangers in her apartment for packet pick-up. That trainer also happened to work at Universal Sole.

That conversation solidified the race’s relationship with Universal Sole, and Stedman was invited to host packet pick-up at the store. Stedman was out of excuses.

That first race in 2010 was a fun run in every sense. Everyone left their bags at Universal Sole while they ran. Afterwards, Stedman remembered fondly, Goose Island donated a few barrels so that all runners could enjoy a complimentary beer post-run.

Lesson two: Know when it’s time to get serious.

In 2011, the Chicago Park District caught wind of the fun run and the fact that t-shirts were available for purchase. That financial transaction – even though no one was turning a profit – triggered certain city permitting rules. Because the race only charged enough to cover the cost of the t-shirts, there wasn’t a surplus of funding to cover the permits and the race was officially cancelled. A few of the race’s returning runners jumped in with CARA’s 10-mile training run, which was on the same day the F^3 Lake Half Marathon was originally planned to run. Perfect camouflage for the race’s second year.

In May of 2011, Stedman registered the LLC for the race’s production company and went to training to help her better understand the roles and responsibilities of being a race director. Stedman walked away from training with a network of other race directors she could turn to for advice as she and her team of nine women created a more formal F^3 Lake Half Marathon.

In 2012, the race was back, formal and permitted and Stedman was fully aware of the responsibility, the risk and the liability that came with that. She said that she didn’t sleep for a week leading up to the race.

“I’m not a very risky person,” Stedman said. “Every year, I get all of my anxiety with all of the risk that comes with putting on this race.”

After 2012’s successful race that boasted 1,200 runners, the race continued to grow, eventually busting at the seams in Universal Sole’s space. The 2015 race moved into a new race-day home: Soldier Field.

When you think of the growth this race experienced from it’s beginnings as a swear-word-titled Facebook group, it’s staggering. The 2017 race is expected to serve more than 3,000 freezing lakefront runners, with an awards ceremony at Soldier Field rather than at a bar with a couple of kegs.

Want to freeze your face off with some friends? The 2017 race will take over Soldier Field January 28 and registration is still open.