Picture the Future of Race Photos With FlashFrame

Picture this: You’re bounding along in the race you’ve trained for religiously over the past few months. Your earbuds are blasting your best pump-up jams (Eminem, anyone?), your legs are fresh, and you feel like a straight-up gazelle.

The next week, you get an email from the race directors with a link to photos. You eagerly click through — only to find MAYBE five photos of yourself, all of which are from awful angles and/or your eyes are closed (how did you even run a race with your eyes closed, anyway?) And if you happen to hit jackpot and find one that you actually want to buy, it can cost you up to $30 just for a digital download, which is way more than you want to pay for a new Facebook profile picture.

Finding a good race photo of yourself at a reasonable price is nearly tougher than running the race. Usually, there’s only one or two photographers on the course, meaning you don’t have very many photo options to choose from. Race management also has a monopoly on the photos, so they can charge as much as they want. So how can you capture your running achievement in photo form? 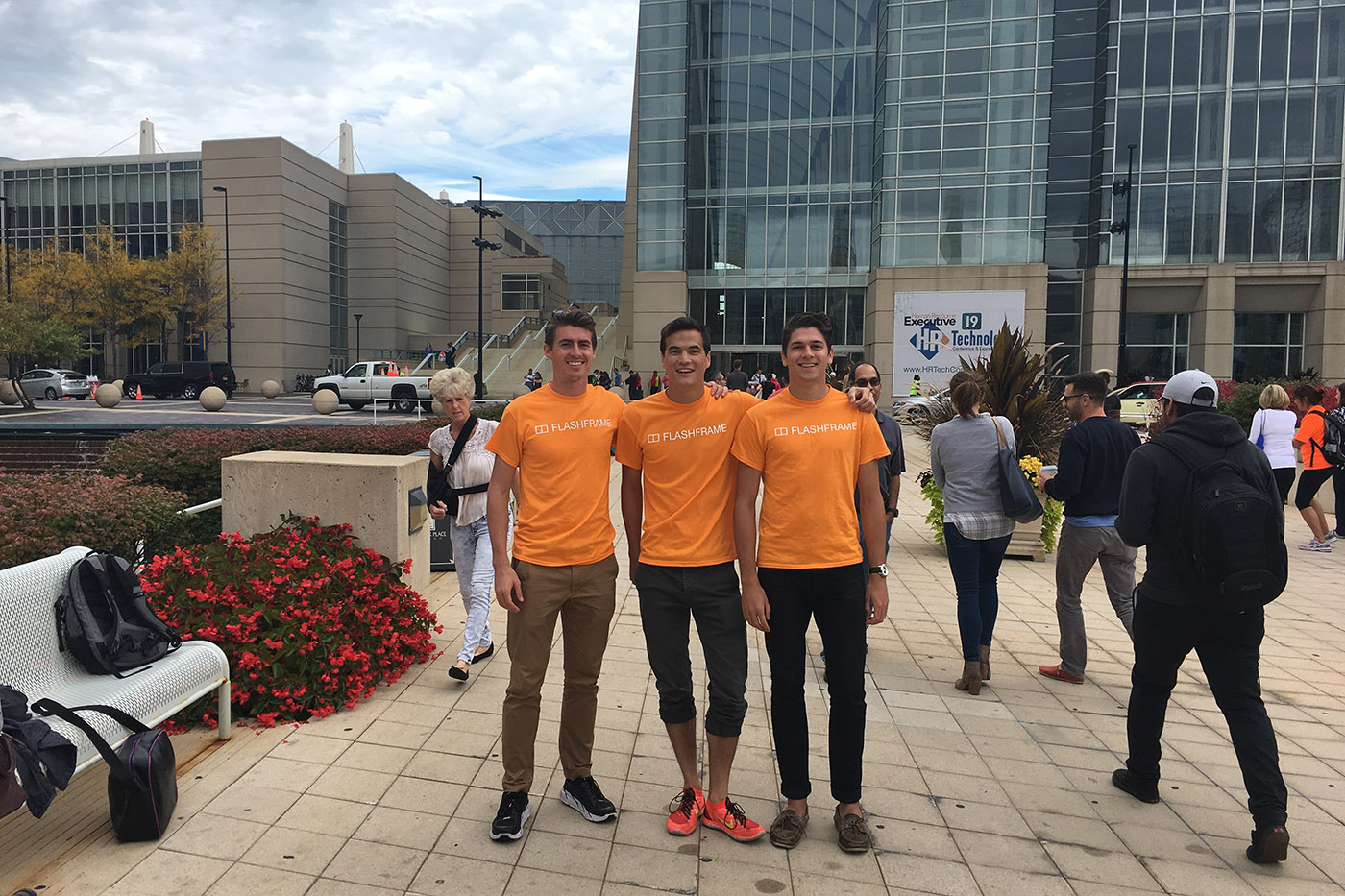 Enter FlashFrame. The brainchild of three former collegiate runners, FlashFrame equalizes the race photography playing field (or running course, as the case may be) by allowing anyone to be a race photographer. Amateur photographers can take photos at any race they choose, uploading the photos to FlashFrame. FlashFrame then uses bib-recognition technology to catalogue the photos which runners can then search for. Find a photo you like? Prices start at a reasonable $6.99, with the majority of the profit going straight to the photographer.

The idea came about when co-founder Griffin Kelly was working on another company called TRAC, which built a machine to capture the splits of high school runners and send them straight to the coach’s iPhone, eliminating the analog stopwatch and pencil and paper that coaches had relied on in the past.

“While we were selling it to people, we were taking pictures the whole time, and several people commented on how no one ever comes to these high school meets and takes photos,” says Kelly, a Jones College Prep graduate and former Biomedical Engineering major at Northwestern.

“I thought about it, and I realized in all the years that I’ve run- since I was 12- I had, like, one good picture every five years. We started thinking about crowd-sourcing photography at high school races and we realized there was also a huge market for big events like the Chicago Marathon and the New York Marathon.”

Plus, even though you might really want the picture of yourself crossing the finishing line, the expense can be off-putting.

“You can rationalize paying $6.99 for a dope photo, but $25-30 is a little out of a lot of people’s price points, especially after you’ve spent all the money on race fees, hotel and dinner,” says Kelly.

At the Chicago Marathon, FlashFrame had over 100 people upload photos and about 82,000 photos uploaded as of October 13. For perspective, official Chicago Marathon race photographers take over 2 million photos. However, Kelly and co-founders Nate Robinson and Declan Murray (both decorated runners themselves, with Murray coming off an Olympics qualifying attempt) view it as a positive debut.

“The thing with professional race photographers is that they’re trying to get everybody,” explains Kelly. “A lot of our people were focusing on other aspects like getting the skyline in the picture and other perspectives.”

As for the process for photographers? It’s mom-tested and approved.

“I made my mom go out there,” explains Kelly of the Chicago Marathon debut for FlashFrame. “She made $5 using an iPhone 6!”

While a DSLR camera will net photographers the best images (and the most earnings), amateur iPhone photographers are more than encouraged to get out there and see what they can capture. Kelly’s rule of thumb? If you wouldn’t buy the photo personally, it’s not a good photo.

“You want it in focus, crisp and the faces can’t be dark – general rules of photography. We’ve seen some real magic from people taking iPhone photos though and it’s really impressive.”

Now that Chicago’s behind them, FlashFrame will continue the marathon and big race circuit. However, Kelly and his co-founders are banking on one more major race day to propel FlashFrame forward: the Turkey Trot.

“As much as going to these big marathons is cool and there’s a need for it, we’ve got a lot of interest – actually, hundreds of people have emailed us – about just going to local Turkey Trots. There are a lot of [people] who only run one race once a year and that’s their local Turkey Trot.”

While big races will hire official photographers, Turkey Trots tend to have one volunteer photographer who posts the photos to a Facebook photo album. FlashFrame’s process, especially with its bib-recognition algorithm, can simplify that process for both race management and local runners who want to commemorate a yearly family tradition.

With FlashFrame taking off, race photos are now about to become more accessible (and affordable) for everyone. There’s only one thing left to do: learn how to run photogenically. Let me know if anyone figures it out!