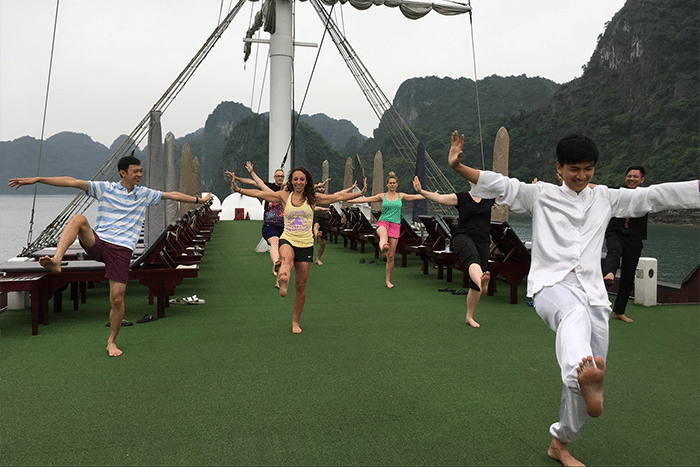 I am always up for trying new forms of exercise, so when I saw Tai Chi on our cruise itinerary during our honeymoon in Vietnam, I set my alarm and made my way to see what it was all about. I’ve seen groups of people doing Tai Chi in parks early in the morning, but I knew very little about what it entailed before doing trying it myself.

Tai Chi is an ancient Chinese practice that originated over 3,000 years ago during the Zhou Dynasty. Although I tried Tai Chi in Vietnam, my instructor learned from teachers visiting from China, where it is most commonly practiced. It originated from the practice of Taoism, which focuses around balance within yourself and with nature – something we could all benefit from.

Although my instructor noted that, typically, elderly folks are most likely to be found doing Tai Chi, it is definitely accessible to anyone. Although in the U.S., it’s common to charge for Tai Chi classes, in China, it’s often free to meet up and practice. There is always a leader, who walks the group through a series of motions. Unlike any other type of group fitness I’ve tried, the leader is completely silent. In fact, everyone is completely silent throughout the practice. It took a different mindset to follow a leader with my eyes instead of my ears, as I’m used to doing in yoga or HIIT training.

Since Tai Chi is a type of martial arts, the moves included various stomping, punching and leg balances (think Karate Kid), but in very slow motion. Like yoga, Tai Chi has a flow and moves completed on one side are later reflected on the other side. Despite the slow pace, I found it to be a bit more challenging than I expected, since we’d hold squats and standing balances for fairly long periods of time. 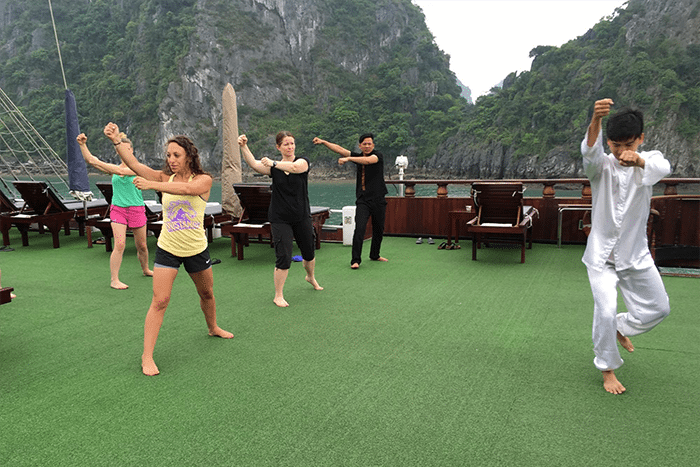 The hardest part for me was having my hands in the right spot, since there are very specific hand movements and the leader was often facing the opposite way. Some moves required hands to look like we were grasping an imaginary orb, while others looked like we were mimes pushing or punching. It was challenging to make sure my hands were facing up or down when they were supposed to – the same way it would be challenging to know when to point or flex your foot in a barre class if the instructor wasn’t saying anything aloud.

The instructor on our boat was incredibly patient (although he definitely spent some time laughing at us when we couldn’t get some of the moves quite right). He didn’t speak English, which meant he truly was silent throughout the practice. From time to time he’d turn around and show us how his hands or feet were positioned, if you weren’t able to see from behind. I imagine that if you met up with a group who had been practicing for a long time, that you might feel a little bit lost but that you would be able to catch on after a few tries. 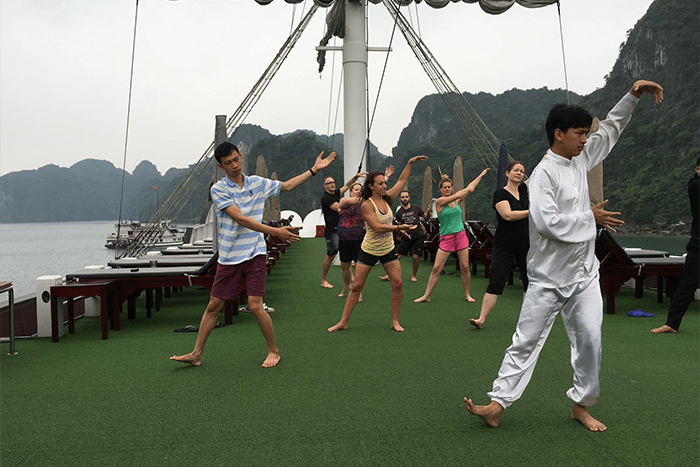 While Tai Chi won’t replace your yoga, strength or cardio, I found it to be a very mindful practice. It was a great way to silently connect with other people, enjoy the sunshine and reflect.

Interested in trying Tai Chi? You don’t need to travel all the way to Asia! There are several locations in Chicago which offer Tai Chi practices.