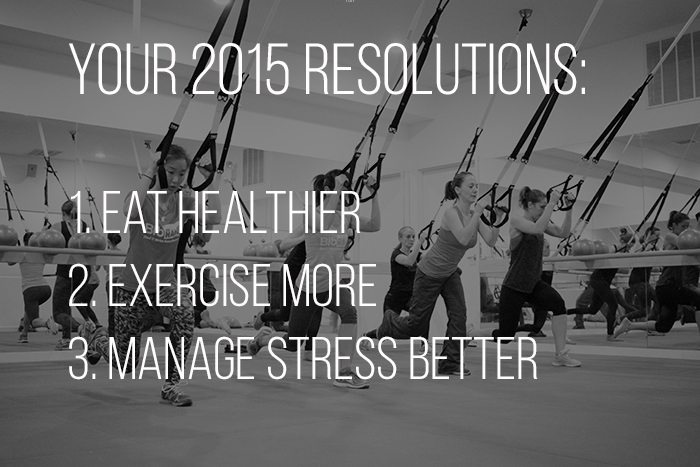 Let’s face it. Sometimes it’s just too hard to keep up those New Year’s resolutions. The excitement of setting new goals and imagining a better year ahead is healthy, but the guilt associated with feeling the need to give up can be discouraging.

Maybe the problem is you’re setting the bar too high.

Typical resolutions like eating healthy or dieting and exercising more are great, but are probably not achievable in the long-run if the means to reaching them include things like crash or fad dieting or setting unrealistic fitness and weight-loss goals.

So what’s the trick to making your resolutions stick? Keep them within reach. Check out the following three resolutions and tips for achieving them below.

Most people can probably say this is a recurring and primary resolution on their list, but sometimes people take this goal too far. Hearing stories about a friend of a friend who lost 20 pounds in two weeks might make fad or crash diets sound tempting, but they are almost never a good idea.

The body needs a diverse set of nutrients on a daily basis, so depriving it through crash dieting (without the guidance of a nutritionist or other healthcare provider) can pose health risks, such as deficiencies of important vitamins and nutrients.

Additionally, such diets usually don’t produce long-term results. According to Lyndel Costain, a registered dietician and nutritionist, most of the weight lost on a short-term, low calorie diet is fluid. Low-carbohydrate diets in particular cause the body to use up its carbohydrate stores — or glycogen — in the liver and muscle, which are stored with three times its weight in water. When these stores are lost, a substantial weight loss might appear on the scale, but weight will go back up once normal eating resumes and glycogen is restored.

Eating well, and particularly eating with the goal of losing weight, has to be done in a healthy, sustainable way. Importantly, cutting entire food groups out isn’t a good strategy either. Even indulging in some dessert is OK — the key is moderation and portion control.

To control portion size at home, use smaller dishes, measure portions when serving your meal and resist going back for seconds. Store leftovers in portion-appropriate-sized containers and never eat out of multi-serving bags or containers. Eating at restaurants can make controlling the portion size of food you eat tricky, but it’s do-able. See if it’s possible to order half or smaller portions. If your entree is bigger than an appropriate portion size, ask for a to-go container right away and put any excess food in it before beginning to eat and share desserts instead of ordering one for yourself.

If your last memory of working out was on a hot summer day in August, don’t expect to be able to stroll into a CrossFit class and keep up. If you’re out of shape, an intermediate or expert level fitness class could be too physically strenuous and probably also a bit intimidating, which could result in feeling discouraged. Instead, try to start easy and set realistic, progressively challenging exercise goals.

Many people fall off the fitness wagon because they think they’re too busy to spend time working out. Liu Gross, a Chicago personal trainer and Nike Training Club trainer, emphasized that the first step to developing a strong, self-directed sense of motivation necessary to achieve fitness goals is establishing a regular workout regimen. “Find the time of day that allows you to have the best work out energy-wise,” Liu said. For some people, this could be first thing in the morning, for others its 7:00 p.m. Whatever time of day allows you the most time and energy to have a meaningful experience, clock your exercise in then.

Carla Primero, a Chicago trainer at The Barre Code and Core Power Yoga, suggests planning your workouts in advance and inviting a friend. “Most people won’t cancel on their friends, so get a workout buddy to keep you accountable,” she said.

One critical, often overlooked aspect of exercise is drinking water. Staying hydrated before, after and during workouts is crucial.

“Your ability to perform athletically can decline with a very small amount of dehydration,” said Amanda Carlson, a trainer who studied college football players and their hydration. “Just losing 2 percent of your body weight in fluid can decrease performance by up to 25 percent.”

Drinking water is essential for athletes as well as for those participating in physical activity of any level, and can truly make or break a workout. If you’re planning on exercising, make sure you’re drinking enough water before and staying hydrated during the workout. This is even more important when working out in a warm environment, whether outside or in a heated class.

This one’s a biggie. In today’s technology-driven, fast-paced world, it often seems more things cause us stress than don’t. The typical stressors of everyday life will always be there, but what about the things you may not even realize are causing you stress? Be aware of the following, hidden stressors to better manage stress in 2015.

We are almost constantly surrounded by social media. According to a report in the Poughkeepsie Journal, Americans ages 18-64 who reported using social networks say they spend an average of 3.2 hours per day on them. While social platforms like Twitter, Instagram and Facebook might be effective ways of keeping up with news (or our friends’ news) and connecting with others, spending too much time on these sites and apps could unknowingly be causing us stress.

Some studies have found that social media sites such as Facebook can decrease well-being and make people feel “miserable” as a result of comparing themselves to others. Some people reported having difficulty relaxing or falling asleep after using social media. Excessive social media and Internet use can even lead to physical changes in the brain. MRIs revealed that the brains of compulsive Internet users exhibit similar changes to people with drug and alcohol addictions, according to the Poughkeepsie Journal.

Getting enough sleep helps keep you stay energized during the day, and better equipped to handle stress. Sleep deprivation can lead to decreased levels of patience and being easily agitated, which can heighten stress. Although many people try to make getting an adequate amount of sleep a priority, certain before-bed habits can unknowingly disrupt sleep, creating a propensity for more stress.

A recent study from Brigham and Women’s Hospital in Boston, Mass., found use of light-emitting electronic devices (including iPhones, iPads, tablets and other devices) in the hours before bedtime can have adverse health consequences, increase alertness and disrupt the circadian rhythm that synchronizes our daily sleep pattern to external environmental time cues. The light from these devices has extremely powerful effects on the body’s natural sleep and wake patterns, and using them before bed can contribute to sleep deficiency, according to the study.

To prevent these effects, avoid screens before bed. Try reading the old-fashioned way — through the pages of a book — instead of on an iPad or tablet. For those of us who absolutely need to look at a screen before bedtime, there are certain apps that cat produce filters that block bright light on phones and computer screens, according to the Huffington Post.

Another way to manage stress is to avoid drinking too much alcohol, especially when drinking is intended to relieve stress. According to U.S. News & World Report, alcohol can alter the way the body manages stress, and even cause more stress.

“Alcohol can change the way that the body deals with stress: It can decrease the hormone cortisol, which the body releases to respond to stress, and it can prolong the feelings of tension produced by the stress. Stress can also change how alcohol makes a person feel: it can reduce the pleasant effects of alcohol or increase craving for more alcohol,” said Emma Childs, a research associate at the University of Chicago and a corresponding author of a study on alcohol and stress.

In the face of all of these stress-inducing factors, there is one cognitive tool that can help control and reduce stress: Creativity. According to an article in the Scientific American, the characteristic of creativity is associated with an open personality and can reduce stress and help keep the brain healthy. Creative people have a higher ability to handle stress because they usually don’t get easily flustered when confronted by an emotional or physical issue.

Not everyone has an open personality. The five major personality traits are agreeableness, extraversion, neuroticism, openness and conscientiousness. According to the report, research consistently demonstrates that neuroticism is associated with poorer health and conscientiousness with better health. While personality is not necessarily a choice, people can strive to cultivate traits such as creativity that can bring them positive health effects, and ultimately reduce stress.

Whatever you’re New Year’s resolutions are this year, remember the key to achieving them is to make them realistic. Plan out the necessary steps to reaching them, and anticipate any obstacles to account for. Most importantly, make it a happy and health New Year!