Finding the Best Fitness Tracker For You 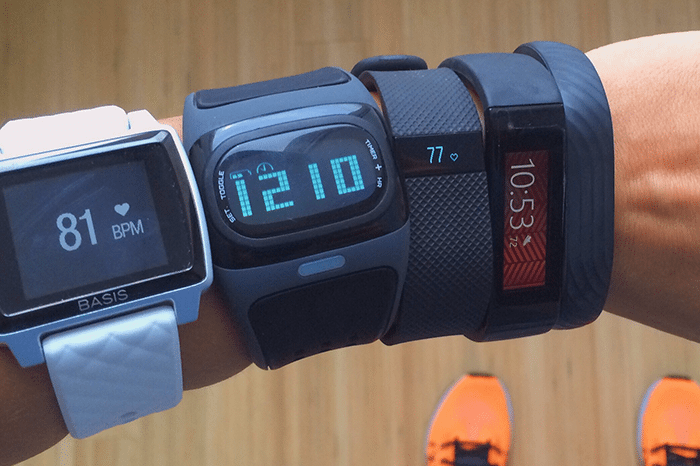 As a self-proclaimed data nerd who loves to work out, you can imagine how much I love fitness trackers. All winter long, when it’s hard to get up to go for a walk, seeing my low step count can motivate a lap around the office or an extra hard workout at the gym. Then, when the first nice spring weather in Chicago hits and I spend my Saturday walking from Lakeview to Green City Market and down to River North for brunch, I want some credit for it!

Fitness trackers can be a great gift for the holidays, but they are not all created alike. With so many devices out there, I tried out some of the top contenders and provided some tips based on what you’re looking for out of your device.

What type of activities do you like to do?

If you’re a runner, and you like to run sans-phone, trackers that include a GPS component are great for measuring mileage and pace. The FitBit Surge and Microsoft Band feature GPS and a heart rate monitor, which can help you set your pace and stay in your heart rate zone. In addition to running, they work with other activities like biking or hiking. The biggest problem with devices that use GPS is that the GPS kills the battery. I found that when I was traveling and going on four to five hour hikes, the devices typically died before my hike was over. I prefer to use the GPS in my phone paired with a fitness app like Endomondo or Map My Fitness, or the fitness-tracking feature within the FitBit app, to measure distance and pace so that my device battery lasts much longer.

If you like circuit training, make sure your device captures heart rate. There are two types of heart rate monitors – chest straps and wrist-based. The chest-straps, like the Polar H7, require a separate device that sync with your phone. They can be somewhat uncomfortable and frustrating when they’re not picking up a signal, but the data they provide is about as accurate as you’ll get. If you just want to gauge how hard you worked from day-to-day, wrist-based monitors will give you data that is a bit less accurate but fairly consistent. Most devices, like the FitBit Charge HR, FitBit Surge, Microsoft Band, Basis Peak, Mio Alpha 2, and even the Apple Watch use the same technology: green LED lights that flash into your wrist paired with a sensor that monitors green light absorption every time your blood pulses. The devices have a tough time capturing your heart rate while you’re doing certain activities like burpees or box jumps, but pick up enough readings during your rest periods to give you a pretty accurate picture of just how high your heart rate was getting during your workout, at least compared to other similar workouts. The UP3 is unique in that it uses bioimpedance sensors for heart rate. This only measures your resting and passive heartrate, so it’s not great for working out.

If you just want to track your steps, keep it simple. There are some great, lower cost devices like the Jawbone Up Move or FitBit Flex that can measure your steps without getting too fancy. If your phone is with you all of the time, you might want to try monitoring your steps using an app like Apple Health to see if you can make do with what you have instead of purchasing another device.

If you’re a swimmer, your options are a lot more limited. Most devices are not waterproof. Two that can be taken in the pool are the Basis Peak, vívoactive and the Misfit Flash. I have taken the Misfit and Basis Peak swimming at the Ray and never experienced any water-related damage, but outside of the pool these weren’t my favorite devices because of their apps.

Some have better apps than others.

Some of the devices I tried, like the Misfit Flash, have pretty difficult-to-use apps that didn’t always make sense to me. Some devices, like the Microsoft Band, don’t have the opportunity to interact with friends, which can be a huge motivator. The Jawbone UP devices have a nice interface that looks like a daily news feed of your activity and sleep patterns, as well as those of your friends who also have an UP device. This news feed can show as much or as little as you want, but the automatic version shows your daily steps, exercise, and the time you went to bed and woke up as well as your nightly sleep pattern. True data nerds will be irritated that the “bar chart” up at the top doesn’t have accurate bars (100% looks just like 102%) but I liked being able to quickly see how close I was to my goal. The biggest disadvantage is that it can be a bit slow to sync and there is no screen on the device itself to tell you your step count without syncing.

My personal favorite is the FitBit app. It’s sometimes slow to sync, but you can tell your progress on the screen on the device so this is less of a big deal. The interaction with friends who have a FitBit isn’t as front-and-center as the UP app. Instead of a news feed, you have a ranking of seven-day steps or you can challenge your friends to a step contest like the “Weekend Warrior” which allows you to measure who takes the most steps on Saturday and Sunday. To me, FitBit does a great job providing peer motivation without my friends getting constant updates about how late I went to bed on Friday night. I also like that if you are going to a wedding and don’t want to wear your device – or you just forget to put it on one morning – FitBit lets you add your phone as a device to still track steps. The data displays are easy to see and use, which I appreciate. Plus, FitBit lets you choose from many different types of workouts for your log, from weightlifting to circuit training to tabata.

I have a nice watch that I like wearing, so I prefer to wear a fitness tracker that looks like a band or bracelet instead of another watch. If you’re interested in a fitness watch, there are lots of options from the Basis Peak to the FitBit Surge to the higher end Apple Watch. The Basis is one of the more comfortable larger devices, where the FitBit Surge feels a bit stiff for everyday wear. Neither is particularly trendy looking, though. The Withings Activité is a nice solution for those who want a really nice looking watch that also tracks steps and sleep, but it’s definitely on the pricier end of the spectrum.

For bands, the Jawbone UP devices are definitely the best looking out there. They have come out with a few new designs lately that look great stacked with your favorite bracelets. The UP2 in particular is a lot thinner than other devices out there, making it a lot more comfortable. I’ve also been wearing the FitBit Charge HR every day for several months now, and although it’s not quite as comfortable as the UP2, it’s a lot more comfortable than other devices I’ve tried like the Microsoft Band. Plus, I like that I can check my steps and heart rate on the screen without syncing with my phone.

Each device has some fun perks that I appreciated. The Jawbone UP devices can be set to buzz after a set amount of time if you don’t move. As someone who works a desk job, that little buzz every hour was a great reminder to take a quick walk around the office instead of sitting all day. The FitBit Charge and Charge HR can be linked to buzz and show caller id when your phone is ringing, and the FitBit Surge also will show your text messages and let you change the song. As someone who always has their phone on vibrate, this has helped me miss a lot fewer calls when my phone is on the other side of my apartment or in my purse. The Microsoft Band also shows caller ID, texts, and even lets you pay for Starbucks with a built in app.

Although I have a lot of these devices, my favorite is the FitBit Charge HR. With the wrist-based heart rate monitor in addition to automatic sleep and step tracking, it gives me all of the data I want from my daily run to circuit training classes. The look and comfort are good enough and I like being able to read my steps on my wrist. Plus, I have more friends using FitBit than any other devices, so it’s the best for peer pressure. At the end of the day, the device you’re willing to wear all the time is the best, since you can’t get any data when it’s sitting on your nightstand!

3 thoughts on “Finding the Best Fitness Tracker For You”