“I’m a meditation slut,” I explained to my therapist who kindly replied with laughter. “I have every meditation app on my phone—10% Happier, Headspace, Calm, Insight Timer. I use them all, but can’t commit to more than a minute or two at a time.” 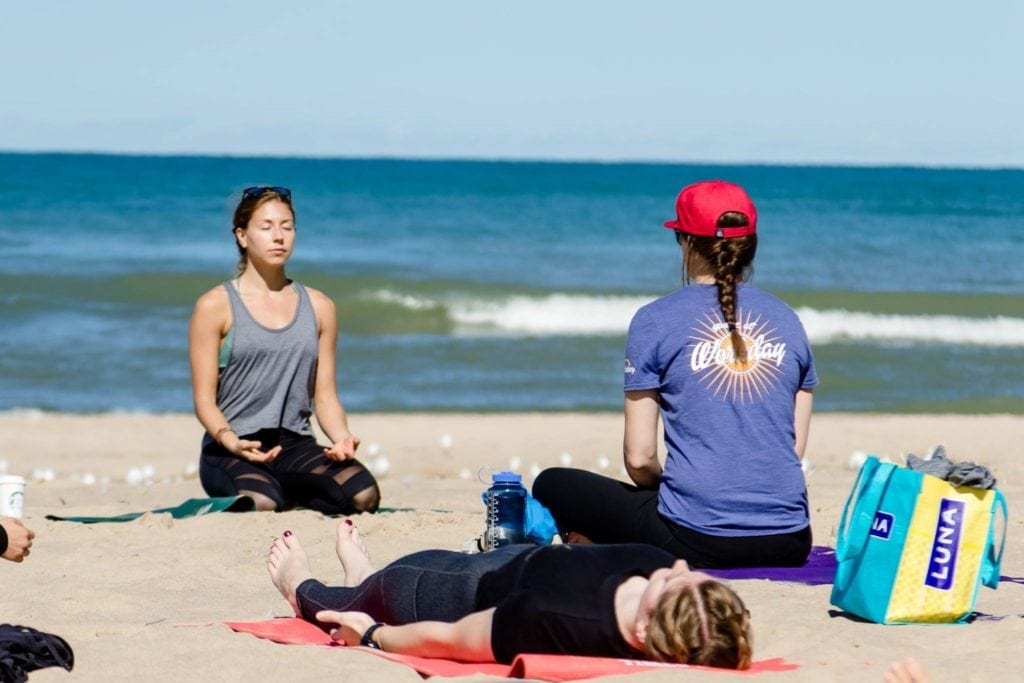 I’ve never needed to meditate more in my life than I do right now. I had, to put it mildly, “The Summer From Hell.” So many bad things happened, but a lot of stress and misery I’ve experienced has been due to fracturing my spine during a HIIT class. I feel betrayed by my own body.

To make matters worse, this injury has caused my already present anxiety to go though the roof. In addition to being physically painful, fracturing my spine has seriously limited my fitness routine and exercise is one thing that helps my anxiety. It’s vicious cycle of frustration. I needed to do something, so I committed to a month of daily meditation.

Being A Bad Buddhist

I’ve been trying to establish a meditation practice for years.  I learned how to meditate at Against The Stream in Los Angeles and it’s always been my go-to spot. But just days after the decision to re-establish my meditation practice, ATS announced they were closing due to financial reasons, to put it simply. While the entire situation makes me feel incredibly sad—I was also rather annoyed that I would have to look beyond my sangha or Buddhist community for group meditations. That’s not very Buddhist of me. I know…

While I’m not too sure if a person can be a good or bad mediator, I know my mediations feel more meaningful when done with a group. I really focus, often transcend and always leave better than when I came in. I went to five very different group meditations during this period.

One meditation that really sticks out in my mind took place at The Den, which is a studio that offers themed group meditations including Break The Norms, Akashic Sound Meditation and Crystal. While this sounds very “woo woo,” to anyone living outside California—rest assured, meditation studios and classes are very much the norm here. The class I went to was called Psychic and the meditation focused on tapping into your own intuition and manifestation. It was so helpful that I even manifested two big things I really wanted.

Here lies the problem. Going to group mediations isn’t practical for my life, but meditating at home sounds like torture to me. Doing the very thing that would relieve my anxiety, gives me massive anxiety. While 20 or 30 minutes in a group is easy for me, anything more than a few minutes at home feels like a monumental task.

In the middle of all of this, I learned that Dr. Stephen Dansiger was going to be giving his final dharma talk at Against The Stream. If his name sounds familiar—it’s because he has been a guest on Marc Maron’s podcast many times. Before becoming a therapist, he was a kind of a rock star. He struggled with depression and even lived in a Zen monastery for a year.

Dr. Dansiger is endlessly fascinating. This isn’t an exaggeration, but I could listen to him speak for hours at a time. His meditation was far less guided than I anticipated, which I ended up liking. But I needed more. So I spoke to him outside of class about how to establish a practice at home.

After explaining my challenges, Dr. Dansiger told me, “I have a diagnosis for you. You are a human being. Just about everyone I’ve ever talked to including myself has a harder time establishing a home practice than getting out to some location to meditate.”

So maybe I was judging myself too harshly. “One of my first teachers used to say that it’s not a solitary practice. It’s a group practice, which is why people find it easier to drop in. It’s not just that there’s getting the guidance—it’s that the collective intention and collective energy of everyone there makes it so that we all sit still and do the thing.”

Dr. Dansiger also shared that he even has challenges and often “gets in a staring contest” with the meditation cushions in his bedroom and office. “It’s totally normal to have it be a challenge,” he explained.

So if five minutes is too much, Dr. Dansiger recommends sitting for just one or two. “It’s not about quantity, or quality, it’s about regularity. So if you are getting on the cushion for five minutes a day, even if you are twitching and checking your watch, you are setting a pattern up for not just your brain, but all of you to make something a practice.”

He also says it’s a good idea to establish a place in your home where you meditate so you can create that ritual. “It works the same way taking yourself someplace does.”

Once you start, Dr. Dansiger says that we become more curious and end up meditating for longer periods. Which is exactly what happened to me.

This morning I woke up and listened to one of my favorite meditations—a very old podcast from Gabrielle Bernstein that is six minutes long. And while I had so many thoughts running through my head, I finally stopped judging them. I went back to the breath and started again. And I’m pretty sure I’ll do the same thing tomorrow.