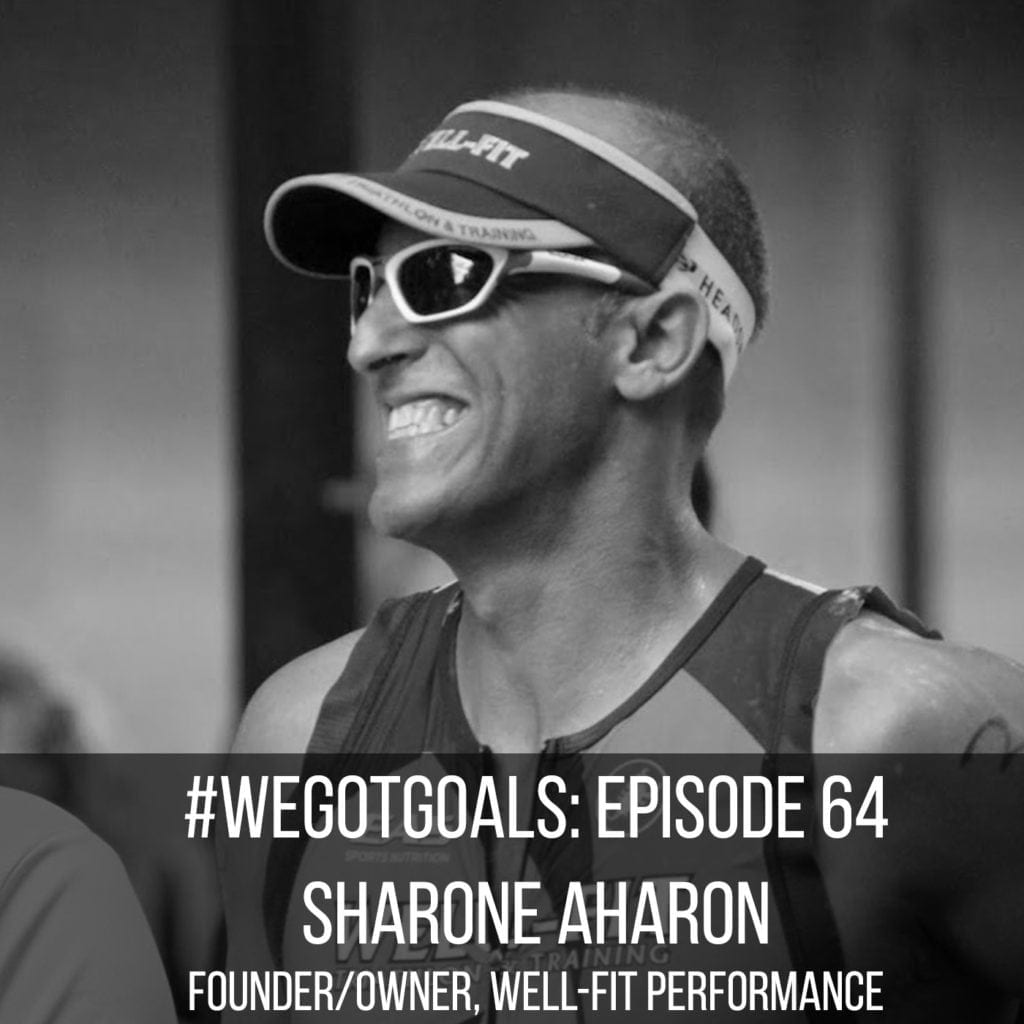 First of all, he’d never done any type of multisport event. He didn’t own a bike. His longest run was about 20 minutes, done as part of his training for the Israeli Secret Service. The first time he got into the pool, he swam 200 yards—then went to the locker room and threw up.

As Aharon explained to me on this week’s episode of #WeGotGoals, getting there required a combination of confidence and naïveté.

“I didn’t have a doubt in my mind that I would make it,” he says. “Look at little kids—when they fall down, they don’t think, ‘OK, I will not ever try again.’ I think that’s what happened. I was this little kid who found a toy and dedicated his entire being to that.”

Plenty of challenges—he calls them “mosquitos,” because they sting but aren’t serious—popped up along the way. Still, so many things fell into place. He immediately got a sponsor, a client who supported his goals despite his lack of a track record. Even the fact that he was able to get into Kona in the first place was unusual and remarkable, he notes.

All this validated what seemed like an out-of-the blue decision at the time—but eventually led to to an entirely new career. “It just came up from within, from the core of my being,” he says. “I can’t explain it.”

“But at this point, it’s part of the way I coach my athletes, how to really engage with their emotions and their goals, and how to combine them together to produce great training and great racing.”

Over the 20 years since that first race, Aharon’s helped thousands of athletes achieve similar ambitious goals through Well-Fit, a triathlon training program he launched in 1998. In 2009, he built a bricks-and-mortar facility. There, at 1700 W. Hubbard St., athletes can strength train (alone or in group classes), swim in Endless Pools, ride bike trainers, and run on treadmills as they train for marathons, triathlons, and other endurance events.

“We took an individual sport and we made it a team sport, and we do that at Well-Fit all the time,” he says. “We have a team of people all competing individually, but because they work together, they actually achieve greater success.”

Well-Fit does have an elite team, members of which tend to finish races on the podium. But you don’t have to be an experienced athlete to take advantage of all the facility offers, Aharon says. You just need a dedication and a willingness to invest in yourself.

At first, “the notion was that Well-Fit is only for fast people. So I said, no … we are making people fast. That’s what we can do. What we realized is that people who come here and get the most benefit are people who care about their results,” he says.

How do you go from merely aspiring toward better performances to making them happen? In our chat, Aharon spills a few clues:

In fact, Aharon’s next goal—besides carving out more time for his own training—is to make his style of altitude training more widespread and accessible everywhere. Seeing others’ success on the program only fuels him to reach higher in business and in the sport.

Listen to Sharone Aharon’s episode of the #WeGotGoals podcast for more tidbits on performing your best, and check out the Well-Fit website for more about altitude training options—and all of the group’s other plans and perks.

You can listen anywhere you get your podcasts (including Spotify!). If you like what you hear, please leave us a rating or a review. And stick around until the end of the episode, where you’ll hear a goal from one of you, our listeners. (Want to be featured on a future episode? Send a voice memo with a goal you’ve crushed, a goal you’re eyeing, or your best goal-getting tip to [email protected])