You Versus Your Ego 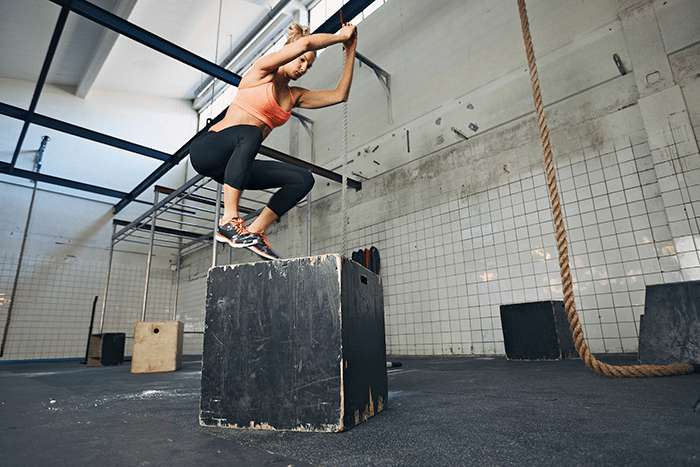 I’d just had a monster week – I was exhausted, but I felt pretty unstoppable. The team at aSweatLife expanded and all of the writers were blowing me away with their unique points of view. I’d just supported workouts with a few of my favorite Nike Training Club trainers, a small group I recently joined – I pinch myself every time I remember that.

I felt like I could literally do anything, which is probably why I saw a counter top and said, “I feel like I could box jump onto that.”

That was an uncharacteristic sentence for me to utter, but it wasn’t me, it was my ego speaking. The ego is an ok thing to use for decision-making – it’s involved in almost every decision we make – but it should never pilot the ship. If not properly checked by logic and safety, things can get messy.

And messy things got.

When someone backed up my claim with a, “You totally could!” I kicked logic and safety out of the driver’s seat. Instead of just living with the knowledge that I probably could land a box jump at that height or creating a similar height somewhere safer, I decided swiftly to make the jump.

Ego here: I landed it.

Logic and safety reporting for duty: stone countertops can be slippery and AREN’T MADE FOR BOX JUMPS.

So, although I triumphantly planted my feet, they slipped right out from under me. The world slowed down as my body was flung backwards. “Shit. This is going to hurt.” I thought just before my head hit a shelf that held boxes and boxes of protein bars.

I stood up and declared, “I’m OK.” Only to learn quickly that I was not as OK as I thought I was as we applied pressure to the spot from which the blood was escaping.

“Why did I do that?” I asked repeatedly. No one had an answer for me at the time, but as I yelled, “Call 9-1-1,” I knew that I had just learned a set of lessons that I wasn’t going to unlearn quickly.

A couple of staples in my scalp, two CAT scans and one ambulance ride later, I’m here to tell you, once again, to learn from my mistakes:

1. Your ego is a supporting character, not the leading lady.

Imagine if The Little Mermaid was instead called, The Powerful Sea Witch and followed the pursuit of world dominance by one crazy six-legged sea witch (It’s six, not eight – I know, I’m upset too). Not a very compelling story. All Ursula cared about was herself and how she would ascend to the ranks of THE MOST POWERFUL.

Sounds like the person at the cocktail party who only knows how to tell you stories about how awesome he is and – for some reason – drops how much money he made last year in conversation. Not really someone you want to be around.

Ego forgets about important things: compassion, empathy, safety and sometimes the people who you love.

Before doing something that is solely in pursuit of protecting your ego, ask yourself three questions:

2. Your head runs the show. Protect it.

We’ve heard a lot about head injuries in the NFL. You know you’re supposed to wear a helmet when you ride a bike and that’s for one big reason: Your noggin holds your brain and your brain is in charge of everything your body does, from picking up a cup of coffee to breathing to jumping on top of things.

According to the Mayo Clinic, traumatic brain injuries are most commonly caused by everything from falling to car crashes to violence to sports injuries to combat-related injuries. Your job is to use your strong body and your logic to protect your brain.

3. “Safe” and “effective” and the only two words you need to focus on when you work out.

Would I ever ask you to do anything you’re uncomfortable with in one of my workouts? Absolutely not. My entire job as a trainer and a coach is to make sure that what you’re doing is both safe and effective.

I base all of my workouts on those tenants, as do all of the trainers I know and work with.

However, I can say, “choose a speed that is challenging, but safe for you” until I am blue in the face, but I can’t stop the athletes in my classes from looking around and trying to beat their closest competition’s speed.

Competition is not a bad thing, but it moves into the “bad” territory when you disregard safety and effectiveness to “win.” When you’re doing a box jump (on a gym-sanctioned box in a safe location with plenty of space to jump and land), if you choose a height based on competition and your form suffers, your exercise is no longer safe or effective.

Was my jump onto a countertop safe? No. Was it effective? Heck no. I’m out of commission for a week and that’s the best case scenario, guys. I should have walked away and gone back to my uninterrupted life.

But the fact of the matter is that I got up and walked out of the ER last Friday. Sure, I left with a few bruises, scrapes and an embarrassing story, but regardless of all of that I’m incredibly lucky to walk, speak and jump onto a normal, safe box again, which I’m planning to do as soon as I get the staples removed from my scalp.

2 thoughts on “You Versus Your Ego”