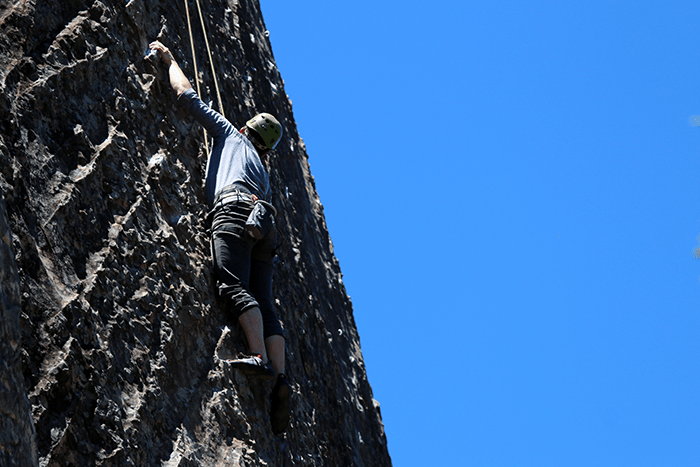 After #Sweatworking at Brooklyn Boulders, I knew that rock climbing was a thing I wanted to happen more in my life. For one thing, the harness made my butt look great from the view on the ground. For another, the next day I was as sore as I’ve ever been. Did you know your forearms can hurt, and a lot? I didn’t.

Plus, the variety of the different routes I could climb – whether via bouldering or harness-climbing – is enough to keep me interested time after time (especially since BKB changes their routes pretty often). Also, rock climbing is fun. Plain and simple.

Since #Sweatworking, I’ve been back several times (having an office one block away is quite convenient, as is BKB’s Ladies Night every Wednesday). While I’m far from an expert climber (still working on mastering the 5.9 levels in the harness), I’ve learned a few things along the way about rock climbing and how it relates to real life.

I’m not sure why there’s such a high correlation between people who rock climb and people who are way cooler than me, but it’s a fact. From the people who work there to the people who are obviously regulars and have their own climbing shoes, there is a certain level of coolness achieved when you can truthfully tell me, “Yeah, I rock climb on the reg.” I have yet to achieve that coolness level, but I’m working on it.

2. Trusting something new can be scary, but it pays off.

Because I usually find myself rock climbing solo, I’m stuck with bouldering or the auto belay. Auto belay, for those of you not familiar, is a mechanical system that eliminates a need for a human belayer (you know, the person at the bottom of the wall holding your rope and giving you slack when you need it). The self-regulating braking system means that (theoretically) I can climb up the wall hooked into the machine via my harness, and once I get to the top, I can (theoretically) completely let go and jump off the wall and not die, instead floating gently down to the bottom like Glinda the Good Witch floats around Oz.

However, jumping off a wall with only an unseen mechanical braking device to help you down is very terrifying. So terrifying that the first time I tried it, I freaked and ending up climbing hand-over-hand all the way down the wall. It was very embarrassing.

The next time I went, I was a little smarter. I didn’t look down from the top, and I didn’t pause to think about the fact that I was voluntarily dropping myself a million feet (or like, 25 feet, whatever). Instead, I just let go and trusted the machine. It wasn’t easy, but the payoff (saving face and not climbing down hand-over-hand like a child) was worth it.

3. Sometimes you have to jump for the things that you want.

When you’re climbing a route, the next handhold isn’t always within easy reach. In fact, many of them require you to jump a little bit, hanging in the air for a split second before either grabbing the handhold and holding on for dear life, or falling. TO YOUR DEATH.

Next steps aren’t always within easy reach in life either. Your next professional move may not be a completely linear one on a pre-determined timeline. You might get an unexpected chance to move across the country, or maybe an adorable lost puppy shows up on your doorstep and you have no choice but to adopt her, even though you’re not sure you have the time or money for a dog (we should all be so lucky to have that problem).

If you want something, you have to go for it, even (especially) if it’s an uncomfortable move. That’s what makes you stronger.

4. Taking a step back can make even the most confusing routes seem clear.

When you’re up close and personal with a rock climbing wall, you can’t always see what your next move should be. Necks can only crane so far back, after all, and oftentimes, what seems like the easiest next move (that is, the handhold that’s the closest and easiest to grab) can lead you further in the wrong direction one or two moves later.

In times like those, although it may seem counterintuitive, the smartest thing to do is go back to the ground. From there, you can see more of the wall, and you can make more sense of the route (or “problem,” as it’s often called) as a whole, instead of looking at it piece by piece.

In real life, that translates to what I like to call “sleeping on it.” No matter how mad I may be about something, or when I’m presented with an important decision to take, I rarely act on my impulse. Instead, I take a day or two to let the decision simmer in the back of my head (or let the rage subside, either or), and in that time, everything becomes a lot clearer. Perspective is everything, and things look way different from the ground than they do from in the middle of the wall, or at the top.

*Unless you don’t follow the instructions of the kind people who teach you how to belay, auto belay or boulder, and you do something really stupid. That’s why they have you sign a waiver.

No one wants to fall. It’s embarrassing, painful and it doesn’t really reinforce the “all rock climbers are cool” theory I’ve been spouting. But after the first time you fall, you tend to realize, “Oh. That wasn’t as bad as I expected.”

Falling (or failing) is normal, if a little scary. It happens to everyone. More often than not, you learn something from it, which makes you stronger for the next time. You’ll figure out new routes, jump for further hand holds, and (stay with me through the cheesiness) … reach new heights.