Marathoners to Watch For: Becca Menke 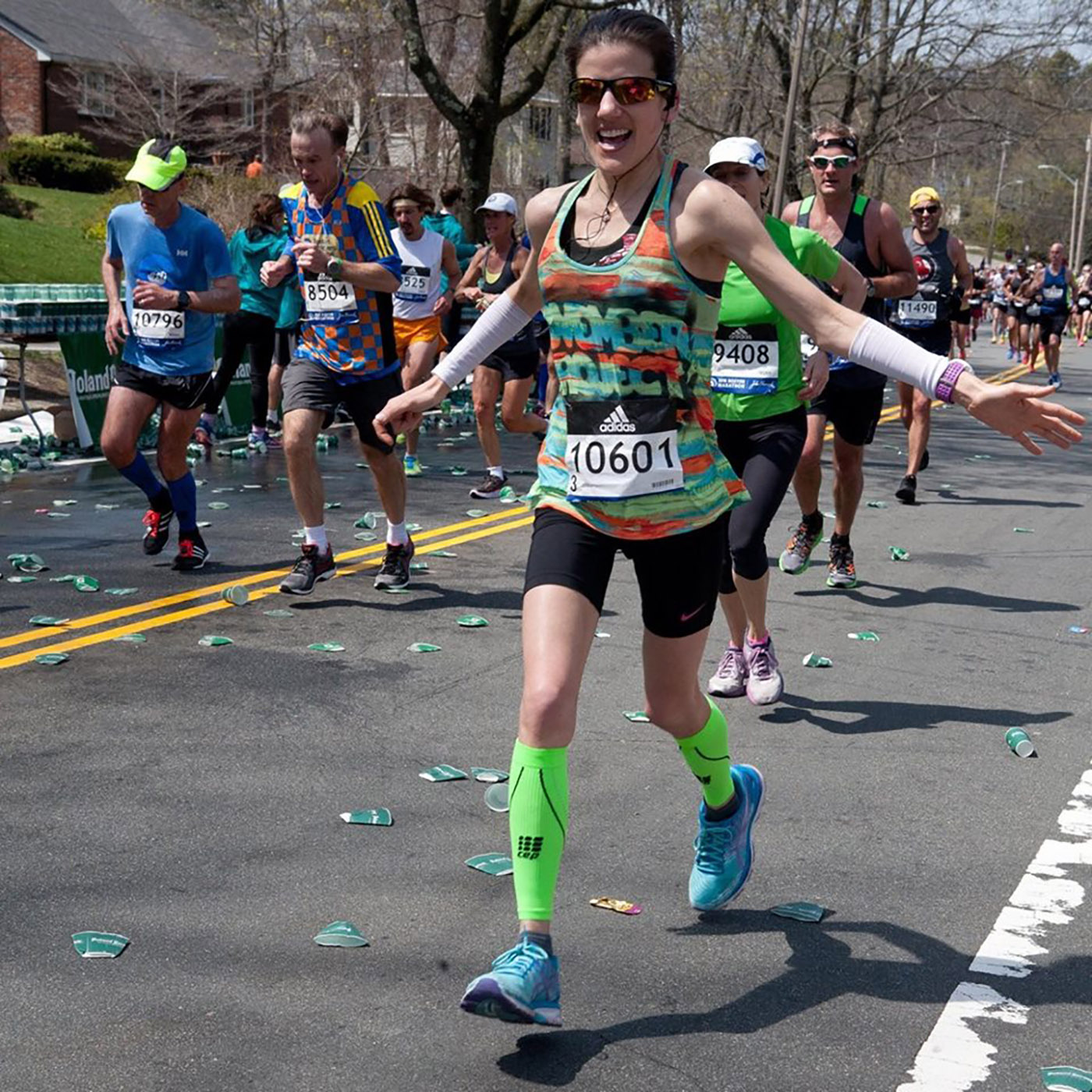 (All Photos Courtesy of Becca Menke)

On one of my bike trips to 3 Floyds this summer, I was introduced to Becca Menke. A runner pushing herself out of her comfort zone with a long bike ride, she had amazing energy and I was excited to get to know her. It didn’t take many November Project workouts together to realize she is a force to be reckoned with, ready to take on any challenge. As she prepared for marathon medal number ten, we chatted about goals, training and why she’s hitting double digits here in Chicago.

ASL: What has been your journey in fitness that led you to this year’s Chicago Marathon?

BM: I grew up playing soccer since I was five. When I was a sophomore in high school, I joined the cross country team as a way to stay in shape for soccer. I always considered myself a soccer player, so cross country was really just a social environment. I went to college at the University of Wisconsin-Madison, and wasn’t D1 soccer material so I started running around the lake as a break from studying.

The summer after my freshman year, a few girls in my dorm were talking about doing a half-marathon in Chicago for a fun trip. I trained for it, and I was the only person to actually run the race. Everyone else realized running wasn’t for them or had something else come up, but I fell in love with training. I loved going to the expo and being surrounded by other runners. By the end of that race, I was hooked.

I stuck with one half-marathon a year until my senior year when I trained for my first marathon. I completed all of the training, and then on the day of the race it was cancelled because the weather was too hot. It was disappointing and I had to put off running for the next two years.

In 2013, I ran my first marathon, the Milwaukee Lakefront Marathon and I absolutely loved it. I crossed the finish line and was immediately thinking of when I’d run my next one. Over the next two years I ran eight more marathons, including two Boston Marathons and Chicago in 2014. My most recent marathon attempt was in Ogdon, Utah. I had to DNF [did not finish] because the weather was rainy, cold and windy, I wasn’t dressed properly and I was pre-hypothermic. One of the volunteers threw me in her car and that was the end of my race.

How did you come back from the hurdle of taking a DNF?

I was devastated. I reached out to a bunch of other runner friends who had DNFed and they helped me through it. They reminded me that one race doesn’t define you. You’re stronger than that.

I got those feelings out of my system and now I’m ready to run Chicago. It’s the next marathon I’ve run since then and I’m looking forward to redemption.

What is your inspiration to complete the marathon?

The idea for running marathons came to me from my mom’s best friend. She ran marathons and would stay with my family to run Chicago when I was growing up. I was seven or eight the first time she did it and we woke up early and drove into the city to watch her at the starting line and then followed her around the city to spectate. After that, I always knew I wanted to run the Chicago Marathon.

One of the times she ran, I was going through a rough patch and at the end of the race she gave me her medal as a way of showing me that she believed in me. Now I’m excited to run Chicago thinking of her. 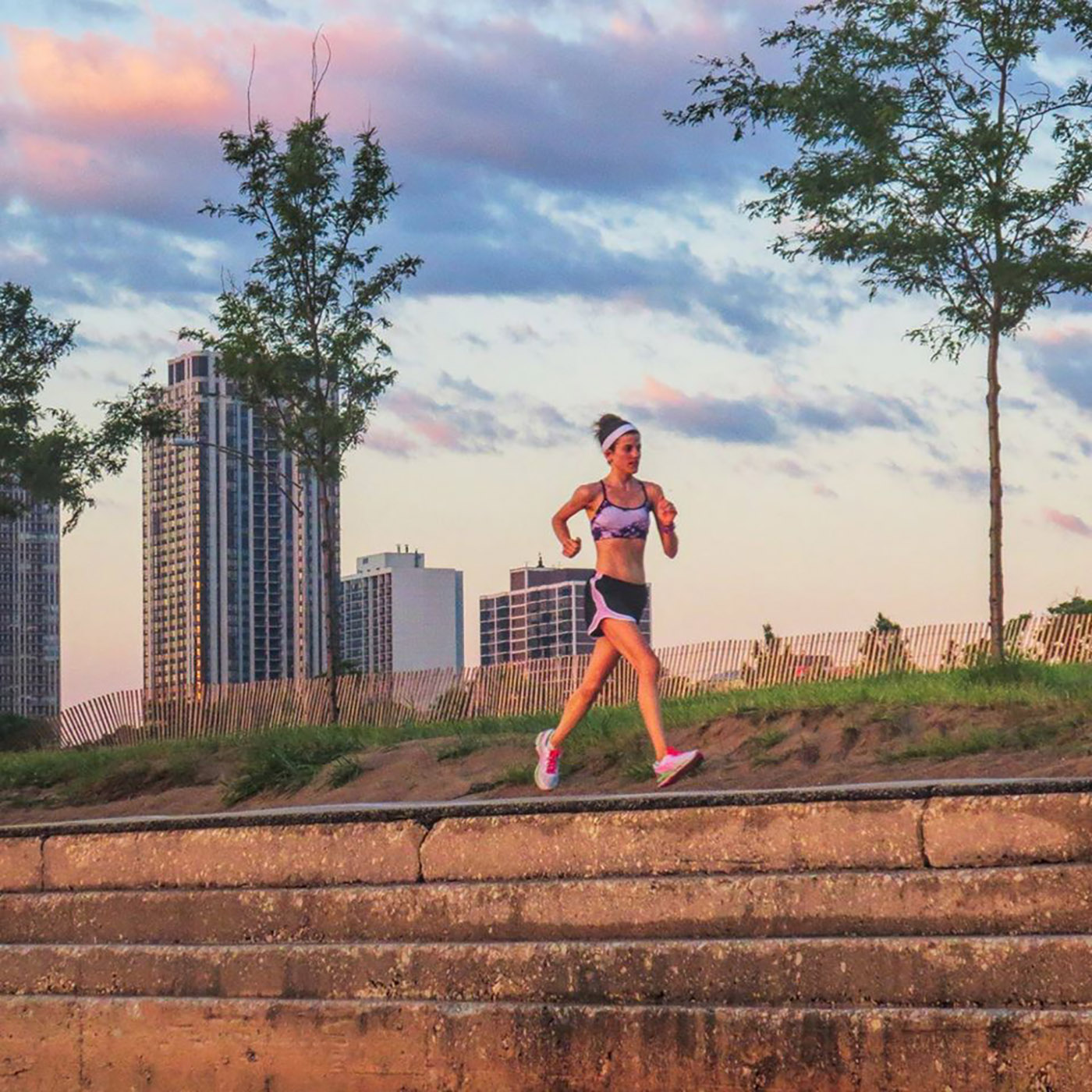 What training plans have you used to plan for this race?

Do you have any goals for this race?

I like to set A, B and C goals. My A goal is to run a 3:10. My B goal is a PR of some sort, which would be a sub-3:17. My C goal is to get a high-five every mile. That’s a goal I know I can accomplish no matter what. I have used that goal before and I love it because I know I’ll feel accomplishment.

How have you modified your diet for running?

After my first race, I was hooked and started reading books by other runners or book about running. I stumbled across Scott Jurek’s book, Eat & Run. He’s a vegan ultra-runner. After reading his book I wanted to take a look at my diet. I was basically a vegetarian already – eating some chicken from time to time – but then I switched to a completely plant-based diet. I noticed that my recovery time improved a lot. I was able to do more, increase my training load and still feel great.

What has been your biggest focus this training cycle?

Recovery. I realized that I had been trying to do too much. After a hard workout, I focus on an ice bath, or using the compression boots at Edge Athletic Lounge. I also swear by tart cherry juice. It’s a great anti-inflammatory and it’s delicious.

On Fridays I train with November Project. On Wednesdays I take the strength class at EDGE focused on stability, strength and speed. I also really like heated yoga. Not super hot, but vinyasa flow in a heated room. I’ve also started biking everywhere. I look at it as a commute, but it’s an active endeavor.

What gear is on your “must have” list for the Marathon?

My Garmin GPS Watch, the Lululemon Stuff Your Bra because it has pockets in it and Gel and Nuun are my essentials. I also wear compression socks. I like the CEP brand because they’re bright neon. I’m going to be wearing all neon clothes for the race.

What is one thing you love about the Marathon?

My favorite thing to look at while I run are the fun signs people hold. I always love when people blow up faces of someone. Those crack me up, especially when they’re bad pictures. I know that a runner will see that and cringe, but I also love it.

To follow along with Becca’s journey, be sure to follow her on Instagram @rabbitfoodruns or on her blog the Rabbit Food Runner. On race day, be sure to track her progress using the ChiMarathon2016 app and aim to be one of her 27 high fives. Bonus points if you bring a big head cardboard cutout of her face!

Check out our other Marathoners to Watch: