Tips for Conquering Your First Triathlon 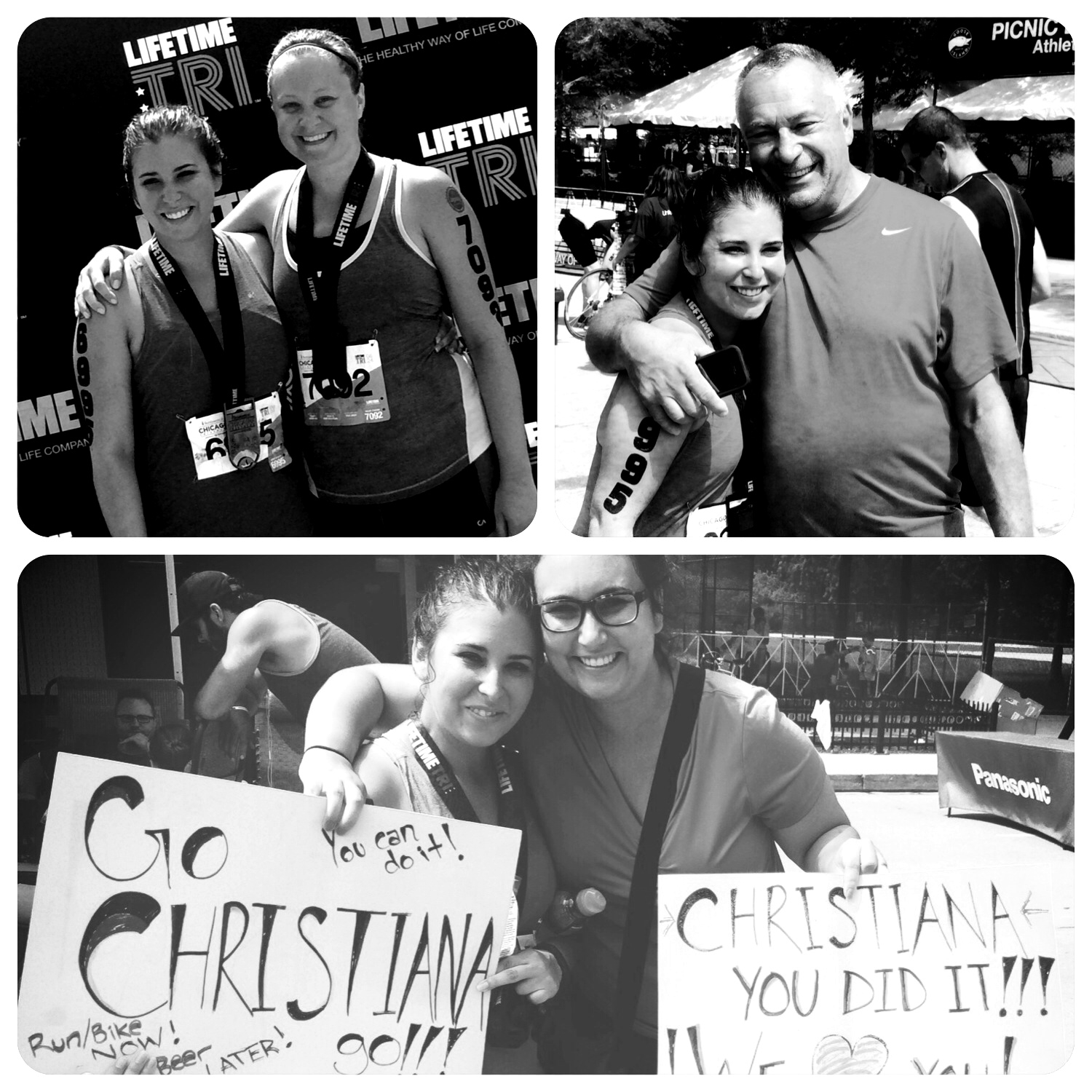 I tell you all of this because I completed my first Triathlon (read: Sprint distance approximately half mile swim, 15+ mile bike ride and a 5K run) August, 24th. I decided to do this because my future cousin-in-law asked me. And when I realized they break you out by age group for the competition (they’re in their early 20s and I am aging gracefully in my 30s), I thought I’d like company and people to train with. I talked a good group of ladies and one husband-to-be into verbal commitments, but for various reasons including but not limited to … life, most of them weren’t able to compete. And that’s okay. Onward and upward. I was able to keep one on board, my best friend Jessica (she lets me talk her into things), committed and we competed together. And it was great.

But, before the end, let’s go back to the beginning. Why did I decide to do a triathlon and more importantly why did so many people turn me down or decide ultimately that life would just not allow them to do it?

Uh because, the word triathlon sounds intimidating. Any competition with the “on” ending sounds hard. Marathon, decathlon … who does triathlons? Not me … right?

Not so. Here’s how I talked myself into it and stayed committed.

As we all know taking that step out the door to get to the gym is pretty much the easiest and most difficult thing in the world to do.

The way that I end up doing most things is by one simple step, say “yes.” Now don’t let your imaginations run wild. There are few things that I won’t say yes to. It’s not like people ask me daily, “do you want to go base jumping?” Then my answer would irrevocably be, “no.” All I am saying is that when people ask you to do something new – whether it’s a new workout, restaurant, entertainment, travel or even a triathlon – you should try to say, “yes.” There’s always reasons to say, “no,” if you really have to. But it’s kind of like stepping out the door to workout, once you’re out, it’s not so bad …

You can do anything. The reason why you might not do anything is because your hopes, dreams … err races can seem like a big ‘ole daunting project. But by breaking it down, things get a little easier. As I mentioned before, I talked a decent sized group of non-workout warriors (including myself) into the tri with two questions. Can you run? Yes. Can you bike? Yes. Well then, I said to my friends and myself, you can already do two-thirds of the tri. We’ll work on swimming together. And when I realized that, I realized I could probably complete a triathlon, and so did they.

3) Focus on Your Weakness.

That sounds counterintuitive, typically it’s play to your strengths but in this instance (for any of you concerned about your overall health and well-being) you can see why that’s not an option.

So as a continuation of questions from above … can you swim? No. No, I cannot swim. I hear you. I have entered my 30s without worrying if I can swim 100 let alone 750 meters. That’s great, except for the fact that if I want to do a tri, I have to swim. Insert expletive of choice here.

So, after I hemmed and hawed about my lack of swimming prowess, I realized I have a gym membership with pool access. And so, that’s what I did to focus on my weakness. I took my butt to the pool. Full disclosure, the first time was embarrassing, I didn’t even own A one-piece, luckily I didn’t care about that too much except for the fact that it’s difficult and inefficient to swim and pull up your bikini while swimming laps. Don’t worry, Jessica’s humiliation at being in the pool with Amateur Annie over here was only for one swim session, I quickly updated to a Speedo before round two. From then on, I went to the pool with Jessica and fiance (a former lifeguard in case I drowned despite being able to touch the bottom …) and swam as much as I could. At first it was twice a week, but I quickly realized that wasn’t going to cut it. I hit the water four-five times a week about two months from the race.

Whether it’s naiveté, ignorance is bliss, whatever, the only way I can talk myself into doing a half-marathon, a tri, a new workout class is by exercising a little bit of faking it. I have no doubt in my mind that this is how I took on my own personal challenge of completing a triathlon.

Some tris may have other requirements, but the Chicago Tri allows you to use whatever stroke you want in the water. Bless them for that. Anyway, I told myself a lot of things during the training for the race to help me overcome my fears. Primarily that if I don’t freestyle the whole thing, there’s always doggy-paddling, floating…there’s a way to get through it. No. But seriously.

Back to serious, one of the best pieces of positive encouragement I received before I decided to do the tri was that swimming was something I would see noticeable and frequent improvements with relatively quickly. I would say that was 100% true, every time I got in the water I tried to make a slight tweak whether it was my breathing, stroke or kicks. Each time, I chipped away at one thing and guess what? Swimming got much easier. I noticed my freestyle (which I had never learned before any of this) got so much better within a couple of weeks. It wasn’t my best stroke, but it’s definitely the fastest way to go. At any rate, if I could freestyle, then I could do the other strokes if needed. These are the things I told myself.

It’s true, I am really good at talking myself into “good ideas,” but even the best con-artist (in this case, that’s me) falters once things get real. The Friday before the tri, my Fiancé pulled out of the tri. He’s in the fire academy currently and had a “come to jesus” with himself about the potential for injury during the race whilst beginning the academy. I couldn’t argue … life reasons, whatever they may be, are yours and are legit. Nevertheless, he still came to support Jessica and me. And that was key. For a few reasons but most have to do with my fear of water. Yes, I said it. My name is Christiana and I am terrified of open water. Which is why I don’t swim. But apparently, I don’t always take my fears into consideration when saying ‘yes’ and that’s how this came to be.

On the day of the Chicago Triathlon, the water was pretty warm (for a great lake), 73 degrees. Bonus. That morning, we arrived two hours early for gear check and setting up our transition areas (I fully recommend taking advantage of the day before transition set-up if it’s offered). We then headed over to the water to scope out the swim. I watched triathletes jump in at the beginning of each wave; identified who was expending their energy too fast, pulled over and gasping after just 100 meters into the swim (note to self: slow and steady). I was nervous but fine. When it came time for our wave to enter the water I dove in to get acclimated to the water and done with the cold. I was totally going to kill it…

I didn’t kill it. I panicked. I couldn’t breath, I psyched myself out, it was all mental. What got me through? Two things, I started to calm myself down and I had my support group. Even though my fiancé decided not to compete, he was there the whole time, he spotted us before we got in the water and call it luck, I had my eye on him the whole swim. And so, I finished with him walking along the waters edge and telling me I was almost there, read: he lied to me. But I finished in 30 minutes (I know that’s not amazing for you swimmers out there, but it’s good enough for me and a lot better than I anticipated with my water freakout) and I can tell you now that I am a much stronger swimmer than I believed.

Seems a bit repetitive of #2. This is the one thing I would have changed about my training. I would have trained in the lake once weekly during those two months to conquer my fear. Now, don’t get me wrong, I fully realized that swimming in the lake would be different than the pool but realizing versus experiencing are not the same thing. To try and compensate, I tacked on another 400 meters to my training, I practiced multiple strokes for when I got tired, I swam multiple times a week. It might not seem like it, but that was a really big deal. I tell you that I swam as much as I could during my training because I know that I am not a swimmer and I knew if I could just get out of the water, I could finish the race. So I am still going to take credit for breaking my weakness and acknowledging that I could have done more and next time, I’ll get in the lake!

Yes, that’s right, I said next time I’m signing up for the Chicago Triathlon, August 2015.

I put together these tips because after a bit of reflection, participating in the triathlon was a bit of a life lesson. All of the notes above can be applied to any race your training for and also your personal goals. Was I transformed by this experience? Not really, I just applied my current life method to a fitness goal. Am I a super workout warrior? No.

2 thoughts on “Tips for Conquering Your First Triathlon”