Jordan Hasay Aims for the Race She Was Born to Run 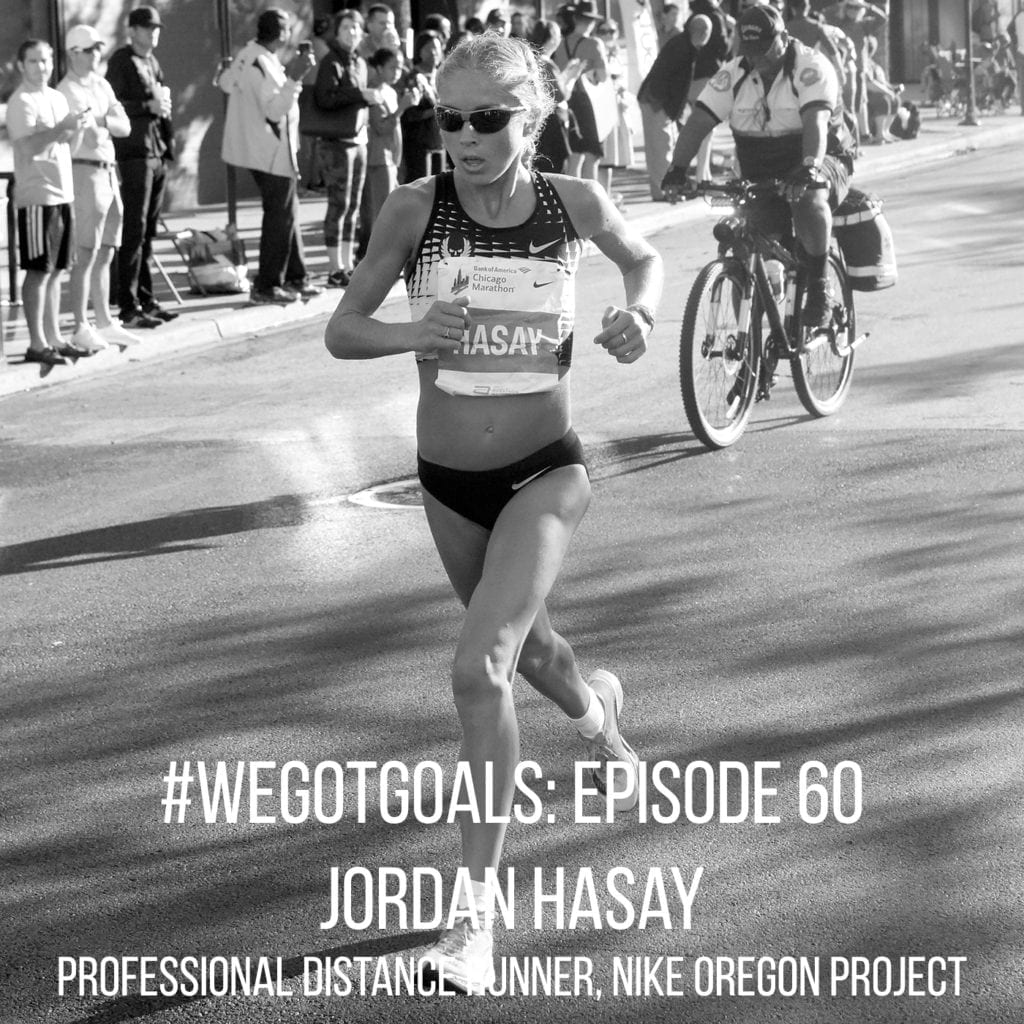 Elite runner Jordan Hasay had a goal of winning this year’s Boston Marathon. And she had a good shot—in her first marathon, in Boston last year, Hasay finished third and ran a faster first marathon than any other woman in U.S. history by almost a full three minutes (her 2:23:00 bettered Kara Goucher’s record of 2:25:53, set in 2008).

Last fall at the Bank of America Chicago Marathon, she once again finished third, and improved her time to 2:20:57. Magazine profiles were written about her chances.

But this past April 16 was not her day—and not, in her case, because of the epically bad race conditions that knocked out so many other athletes. As Hasay explains on this week’s episode of #WeGotGoals, a stress fracture sidelined her the day before the race.

“You put so much into the preparation and then I got so close to being able to race,” she tells me. “When you do set a goal and then you’re not able to achieve it or even—I mean, not even being able to toe the start line, that’s really tough.”

Hasay took about a week to wallow (which, research shows, is actually good for you, in moderation). Then, she refocused and moved ahead. She set new goals for improving her weaknesses. She worked on strength in the weight room, flexibility on the yoga mat. She called her dad proudly when she did a 30-second handstand.

Eventually, those small goals added up to an emerging comeback. A mile became a mile and a half became 55 per week. That sounds like a lot to us mere mortals, but to someone like Hasay who typically puts in 100-plus when building up for a marathon, it’s still far from her normal.

But she’s getting there, and feeling good about her prospects. When Hasay started doing faster workouts again, she and her coach Alberto Salazar noticed improvements. “He goes, it’s the yoga! Your stride looks so good!” she says.

Those of us in Chicago will get a chance to see that stride in action gain this fall, when she’ll be back here with her sights set on placing higher than third and beating the American record of 2:19:36 (set in 2006 in London by Deena Kastor).

This injury wasn’t the first time Hasay has overcome obstacles. In fact, her current successes were made possible, in part, by challenges. “You can find the positive in anything,” she says. “I try not to see anything as a negative.”

She’s been running since she was 12. In high school and college, she was a legitimate star on the track—at 16, she ran the 1500 meters in the Olympic Trials. But when she graduated and turned pro, in her words, “I wasn’t having the success that I wanted.”

Like most elite athletes, she revels in the process, enjoying even the tough days. Still, as much as she loved running, she began to realize she needed to refocus to achieve her long-term goals of winning medals on an international level, at the Olympics or a world championship. “You have to see some outcomes in order to keep staying motivated,” she says.

Moving from the track to the roads, and from shorter distances up to the full 26.2-mile marathon, was something she’d always planned on eventually. Actually making the leap was scary. After all, if she hadn’t been any good at it, she would’ve had to refocus entirely.

In October 2016, she ran her first longer road race—the USATF 10 Mile Championships in St. Paul, Minnesota—and won. That gave her a glimmer of renewed hope. Now that she has two successful marathons under her belt, she feels confident she’s on the right path.

“Sometimes when you are setting a goal that helps,” she says. “If you keep trying to go back to the same thing like I was on the track—I have all these memories where I was trying to hit a certain time or pace and I just kind of failed. So maybe just change it up. It’s still running, but it was just totally different kind of vibe for me.”

“It’s nice that I found the distance I was really born for,” she says.

All this came in the midst of yet another significant setback. In a sad story I’m grateful she was willing to open up about, Hasay’s mother—her best friend—passed away in 2016, after the 10-mile race but a few months before that first Boston Marathon.

Though she was devastated, Hasay channeled her grief into greatness in her marathon debut. She visualized her mother there with her, drawing strength from her memories and the foundation her family and faith had given her. In an interview afterward, she cried, saying she knew her mom would be proud.

A journal in which she wrote letters to her mother, intertwined with her running log, helped Hasay in the tough weeks and months after. So did spending time with her family—she, her father, and her brother remain extremely tight-knit. “We’re all doing really well, which I’m just thankful for and that kind of propels me forward,” she says.

Listen to her on the full episode of #WeGotGoals on Apple Podcasts here. You’ll hear more about the value she places on rest and recovery, what she cooks for dinner, and how much she can deadlift (hint: WAY more than you’d think for a marathon runner—she’s posted her strength-training routines on Instagram to prove it).

If you like the show as much as we do, be sure to subscribe wherever you get your podcasts and leave it a rating and a review — it really does help. And stick around until the end of the episode, where you’ll hear a goal from one of you, our listeners. (Want to be featured on a future episode? Send a voice memo with a goal you’ve crushed, a goal you’re eyeing, or your best goal-getting tip to [email protected].)