Welcome to the Velodrome: How the Lexus Velodrome Compares to Outdoor Biking

Aside from when I was a kid riding around my neighborhood with friends, biking has never held my interest. (Unless you count spinning, which, obviously, I don’t). In fact, the older I get, the more afraid I am to ride a bike, especially in traffic surrounded by drivers who don’t look out for pedestrians, let alone bicyclists.

Despite my lack of interest in and fear of biking, I’d been looking forward to the latest addition to the Detroit fitness scene: the Lexus Velodrome. Probably because I enjoy seeking out new athletic challenges, but also because it was built in my hometown (ish – I’m from the Detroit  suburbs) and I’m always happy to hear about cool things popping up there. 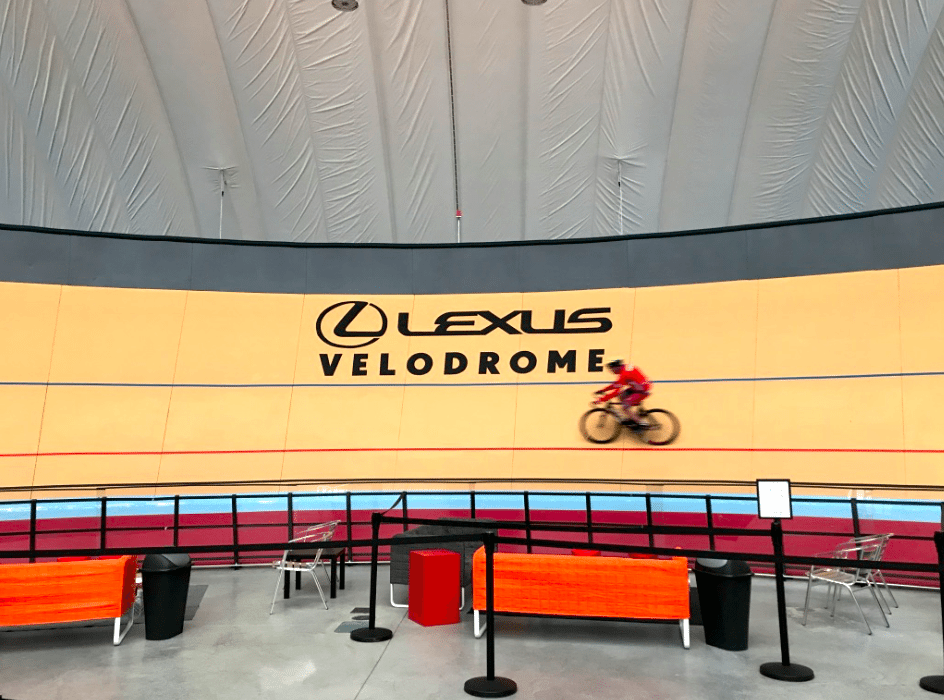 The indoor cycling track, which opened to the public in January 2018 and is only the third in the U.S., is a 166M (or 0.1 mile) oval. It is banked 50 degrees in the turns and 15 degrees in the straights. I don’t know what that means either, but Dale Hughes, who designed the facility and taught my 101 class, explained it takes about 10 laps to complete a mile. As for the embankment, it gets steeper and scarier the farther away from the infield you get. My sweet spot was the red, flat lane closest to the infield.

After a few laps of taking form and speed cues from the very patient and helpful Dale, I was directed to go up the embankment. I was supposed to pedal faster the higher up I went to keep my momentum, but that’s not exactly what happened.

Dale likened what I did to mountain biking, as I rode up the embankment, started to lose speed and immediately came back down, only to head back up and then down again, etc. That apparently made my task more difficult, but as the bike’s tires felt like they weren’t so much on the track as they were spinning parallel to it, I panicked. Fearing the tires would kick out from under me at any minute, my extreme biking maneuvers kicked in to gain some control, but that feeling never fully set in.

Luckily the other two people in my session were either resting (It is a totally different type of riding that takes a lot out of even experienced bicyclists), or they were smart enough to avoid me when I was on the track. Since everything happened so fast, I didn’t even think to watch out for them. Which meant I was the equivalent of the impatient drivers I fear on the streets of Chicago. 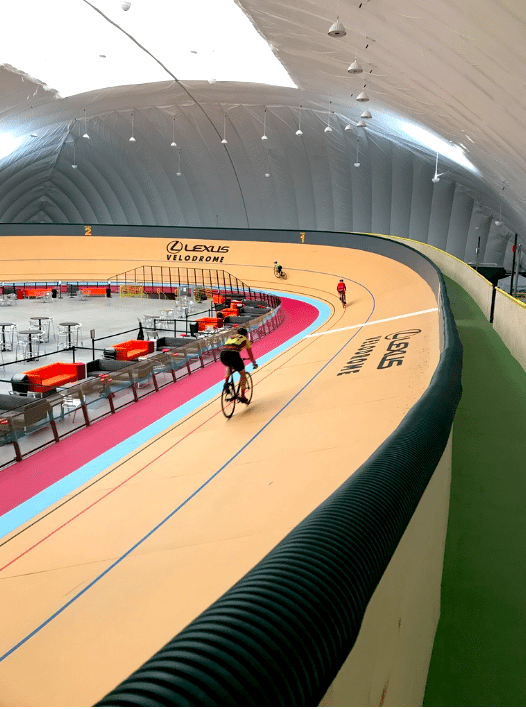 The space itself looks like a sports stadium has been dropped in the middle of a warehouse. Instead of seating though, it’s the embankment of the track that curves upwards. Fitness lanes for walkers, runners and inline-skaters encircle the outside of the track on the ground floor and is open for general use. Detroit seniors can utilize it for free during designated hours. Group fitness classes have also recently been added with free options, as well.

The efforts to make the facility financially accessible is commendable, especially when it comes to area youth. The Lexus Velodrome provides free programing to kids 18 and under. That means all equipment rentals, track usage and instruction comes at no cost to the participants.

The velodrome isn’t just for recreation though. Weekends are for racing, with riders coming from across the country and even around the world to compete. Look for livestreams on the Lexus Velodrome Facebook page.

One last thing to mention is there are no brakes on the bikes. You slow down by using your foot to resist the forward momentum of the pedals, adding to the physicality and angst of the sport. Though scary, biking the velodrome is exhilarating and worth a try for athletes of any age or skill level.

I survived my experience to be evidence of the latter. The 70-year-old man who got on his bike to lap the velodrome with grace and ease, as I opted out after two shaky runs, was evidence of the former.

The Lexus Velodrome is located at 601 Mack Ave, Detroit, MI. Read more on Dale Hughes and the history of velodromes at the Detroit Free Press.