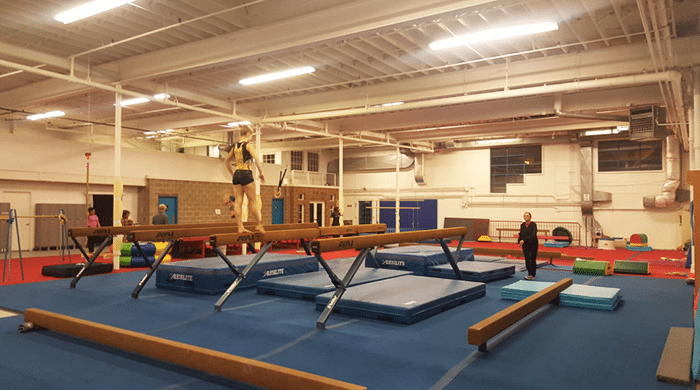 I’m not particularly flexible and I don’t remember taking gymnastics as a kid, but something about an Adult Gymnastics class spoke to the inner athlete in me. I didn’t go in with aspirations of doing backflips (in fact, I gave a hard pass when the instructor suggested it), but I was excited to see what, if anything, I could do beyond tumbling.

While C.I.T.Y Club Gymnastics Academy is mainly geared toward kids and teens, they also offer an adult class every Wednesday night. Taught by Ryan Carr, the session involved some of the same moves I learned at Aslyum Stunts. Which made sense considering Ryan has done stunt work on, among other TV shows,“Chicago Fire” and “Chicago P.D.”

The class started off on the mat with some stretching before we learned how to properly do a forward roll, which meant our head and neck never touched the floor. We also performed cartwheels and handstands, which led to walking on our hands. I could barely do a handstand, so the walking part didn’t exactly happen. It was more like I moved one hand before my legs fell back to the ground. Ryan remained encouraging nonetheless.

The handstand that I could do was against a wall. With my hands planted, and with some assistance, I kicked my feet high onto the wall. After walking my hands as close to the wall as possible, I slowly lowered my body down into a forward roll. It was tough trying to control all of my body weight with my arms, but I felt a huge sense of accomplishment upon pulling it off. 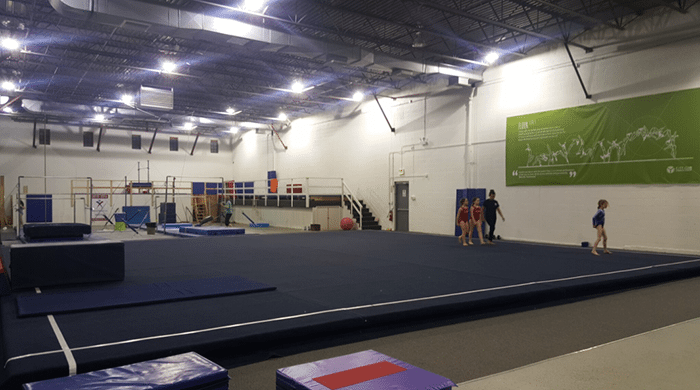 There was a parkour section where we rolled forward and/or sideways over a foam block that was at hip level. We also ran two steps up a wall before diving into a roll over another block. For me, that actually meant just jumping onto the block feet first, but I still felt like I was performing a pretty cool trick.

Flips onto a foam mat were also involved. Without my previous experience of doing something similar at Asylum Stunts, I don’t know that I would have so readily run down the bouncy runway to hop, jump and then flip onto the mats. I did use my hands to help guide me over the mats at first, but after a few times, I was able to do it free and clear.

My flips weren’t perfect, but a supportive Ryan declared there were no mistakes in gymnastics. You just had to add some flair to make it look good. He seemed to really believe that until I mis-timed a hop, hesitated and landed half way off the mat. I was pretty confident I proved his theory wrong.

We ended the session by running toward a tall block, rolling sideways over it and landing in a sea of foam squares. It seemed pretty easy until I realized climbing out of the foam pit was the real workout. There was nothing graceful or easy about it.

I may never do a handspring or even a back bend, but Adult Gymnastics was a great way to challenge myself both mentally and physically. It forced me to think about how to move my body in ways I usually don’t, and then, to my surprise, actually do it. With varying degrees of success, of course.