How to Support a Friend During Her First Juice Cleanse 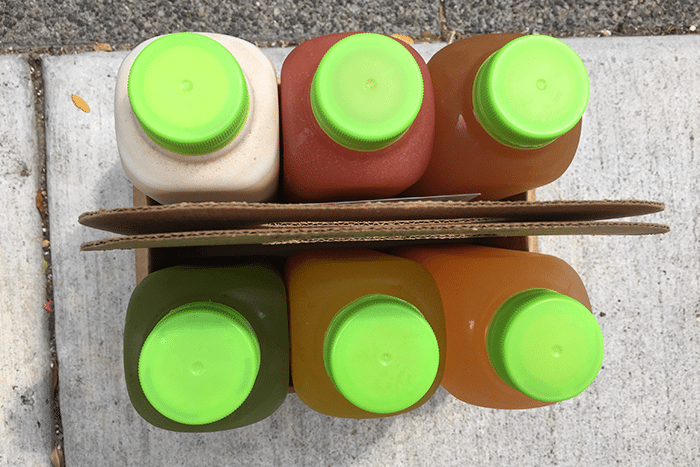 I like eating. More specifically, I like eating every three hours (at time of writing, it is 9:34 a.m. and I have already had three breakfasts. #longrunproblems). I like the sensation of chewing. I like nibbling on almonds while I’m copyediting documents at work, I like irritating the hell out of my coworkers by eating an apple with peanut butter at 3 p.m. every day and chewing very loudly. I like curling up with an evening snack of yogurt and berries while catching up on television. Suffice to say, a juice cleanse has never appealed to me.

However, I have friends with much stronger mental willpower than I possess, and recently, one of those friends embarked on her first juice cleanse. You know what they say – for better or worse, in juice cleanses and in health. I volunteered myself as  emotional support system during her three day juice cleanse. I can’t tell you anything about actually doing a juice cleanse, but I can tell you how to be there for a friend during this tumultuous time.

Phase One: Excitement and Encouragement

During the days leading up to a juice cleanse and the first day of, your friend will no doubt be excited about her upcoming cleanse. She may send you descriptions of the juices, funny reviews of the cleanse that she found on Yelp!, and generally express excitement about how great she is about to feel.

Your job here is to feed this enthusiasm as much as possible. Agree fervently with your friend. Marvel over how decadent the Cashew Milk juice sounds for an evening snack. The goal is to stockpile the reserves of enthusiasm so that your friend can draw on them when times get tough.

Somewhere around your friend’s second or third juices, your friend might begin to express her first shadows of doubt. “How is this going to keep me full until dinner?” “I didn’t really like that juice, and I have to drink it again later today? Ugh.” It’s too early for this worrisome attitude. Help your friend gloss over these slight anxieties with responses such as, “You got this, dude!” and “Research shows that we can train ourselves to like healthy food just by exposing yourself to it more!” Soon, your friend will once again be footloose and fancy-free.

It’s also important to note here that at no point during this juice cleanse should you mention to your friend anything relevant to the following topics: what you’re eating for lunch, what you ate for breakfast, where you’re going for dinner or the giant donut cake that just got delivered to your office. Also, don’t ever make the mistake of saying “I’m staaaaaaarving.” You don’t know what true hunger is.

What kind of social activities can a person on a juice cleanse do? No, I’m asking you – I have no idea. Without dinner plans or happy hours to attend, or even a good dinner to cook and eat at home, my friend found herself with hours and hours of free time to fill after work. Hang out with your friend if you can, or offer other gifts such as your HBOGo password. Personally, I assigned my friend to read the entire handbook for the Hood to Coast race we’re about to embark on, and then report back to me with the most important parts – so book reports are a good distraction as well.

A funny thing happens when you’re on an all liquid diet: you lose your energy. After all, you’re not getting the levels of protein that you’re accustomed too, and you’re probably not working out either without the proper fuel for a workout. Your friend will be tired, and it’s your job to either chauffeur them from place to place or pay for their Ubers. It may sound expensive but trust me, it will save you the burden of listening to them talk about how tired they are.

Phase Five: “Oh crap, what have I done?”

Around day two, when your friend is feeling a little tired and a lot sick of juice, they may start to take to the internet again with all their free time. Juice cleanses are a little bit controversial, and experts are divided on their benefits. Your friend will inevitably find all the articles that say juice cleansing is a straight shot to unhealthy crash dieting habits, or it’s going to permanently screw up your digestive system, or it’s going to make your pee green forever (I made two of these up). “NO!” you say. “You’re doing this juice cleanse for the #RightReasons. Stay the course! You’ve only got 24 hours left!” Don’t let them fall off the wagon – if this happens, they might try to juice again in the future and we’re all back at Square One.

It’s day three. Your friend has one thing on her mind: her first non-liquid meal. Support her by throwing out ideas that range from healthy and probably smart (“how about a fruit bowl?”) to mmmm still pretty reasonable (“PIZZA! You need the substance!”) to might-actually-kill-her-from-sugar-overload (“I’m ordering you a donut cake. You can’t stop me.”)

You wake up on day 4 and have already received two Snaps of your pal’s return to solid foods and coffee (expect these Snaps and food text updates throughout the next couple of days). Buoyed by their success, your friend is likely to retroactively forget just how miserable she was at some points: “That wasn’t so bad! I’ll totally do it again sometime!” Just nod knowingly, and mentally steel yourself for going through this again in four to six months.