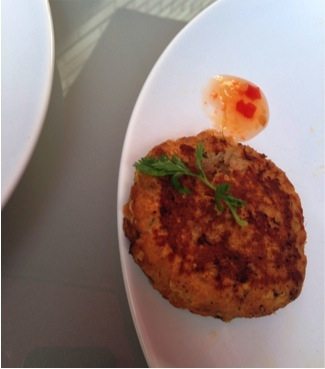 Commonly known as Tod Mun or Thai Fish Cakes, this recipe has been modified. I proudly proclaim this version as a healthier alternative to its original counterpart. Traditionally made with fish paste (a base mixture of blended raw white fish, eggs and cornstarch), this recipe is cleaner and much easier to make. The prep time is down to under 5 mins – BOOM, healthy Thai food!

Sold as a popular street snack, skewered on bamboo sticks and accompanied by Ajaard (Thai Cucumber Salad), these Thai Salmon Cakes are skewer-less and can be served as a main course, eaten with a fork and knife. Add a salad. Add a healthy carb. You’ve got a meal.

It’s really that simple. When you bite into it, you can taste the fish, the citrus, and the shallots. You can add a dollop of greek yogurt or store-bought sweet and sour sauce on top. At a later time in a later post, I’ll teach you how to make your own sweet and sour sauce. But, you can also do what my husband does. He drenches the patties in ketchup. SMH.