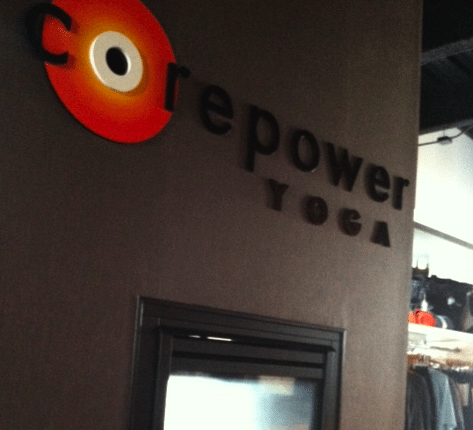 (I apologize – the studio was so dark, my photos didn’t turn out. But I assure you, it’s large and clean)

Cost per class: $20 for a single class

Who should take the class: Yogis looking get stronger in their flow, anyone trying to get those hot yoga arms

Sweating makes me feel like I’ve accomplished something. I did a lot of that in this class. I took it 3 times during my free week and felt a little bit zen and a little bit exhausted each time. It’s not difficult because the you’re doing too many reps, it’s difficult because it’s a sculpt class in a 90+ degree room. The heat and the weights take the challenge up a notch, but yogis know that your practices is your own and there are always ways to fit the class to your body.

The class takes you through two sun salutations, each using different yoga poses as a base for simultaneous arm and leg toning exercises. The flow keeps the keeps the class moving quickly from downward dog to warrior 2 to the sculpting moves to a random cardio burst. There are still quite a few elements of yoga that are strong throughout the class like the balance series, which is purely posed, and for the most part without weights. BUT there are some portions of class that are purely strength building – granted a little extra strength can help any yoga practice. The ab moves in this class were tough each time I took it – each included a longish plank hold as well as some crunches on the mat.

While the toning series aren’t “say uncle” challenging – they’re tough and each class offers something that takes you to your max. Again, in the 90+ degree room, cardio bursts were thrown in via mountain climbers, which was the closest I’ve been to throwing up in a while. Actually since my ride at Flywheel …

The verdict: I love a good yoga sculpt class, and this was up there with some that I’ve taken. I will definitely take it again.