“It’s the most wonderful time…” to freak out about sugar! Carbs! Eggnog!

For people who struggle with food and/or body image concerns, the holiday season can bring on quite a bit of anxiety. Even for those who don’t struggle so seriously, there’s a reason many New Year’s resolutions include “weight loss” or “exercise,” and the holidays have a lot to do with it. 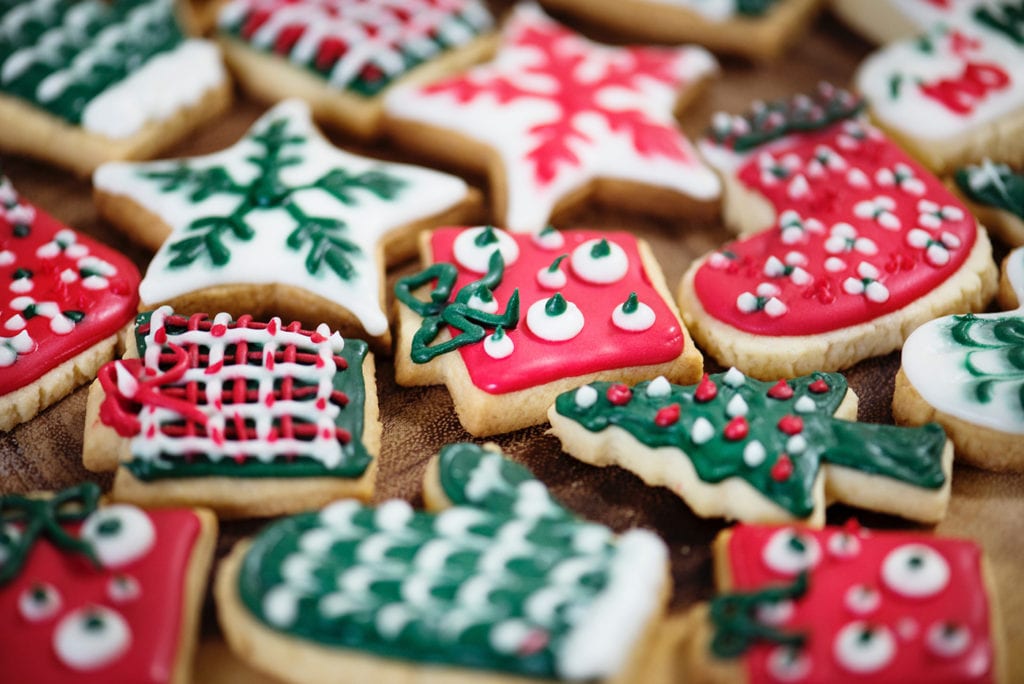 From office and friend parties, to family gatherings, to gift baskets and candy jars on desks– the exposure to delicious desserts, hearty meals, and endless libations October through December can be overwhelming to be sure, but it doesn’t have to be.

It is possible to navigate your way through every shindig, cookie offering and cocoa mug, with kindness, balance and grace, and it doesn’t include the typical “foods to avoid,” “drink water” or  “fill up on protein before you go out” health hacks.

Intuitive eating isn’t a new concept. Its creators, Evelyn Tribole and Elise Resch, both MS Registered Dietitians, wrote the first edition of their book of the same title in 1995 (it has undergone a few iterations since then). They learned in their respective practices that diets didn’t seem to work for their clients, at least long term. So they endeavored to change their approach, and developed “intuitive eating”—a way of eating that aims to abolish diet mentality and actions, strict meal plans and “willpower,” and get back to our instincts, learning to trust our bodies again. Their main goal is to help people create a healthy and loving relationship with food and their bodies.

1). Be Intentional Without a Diet Intention

“Diet intention” is the voice in our head that tells us certain foods are “bad” or “off limits.”

Most holiday eating tips you’ll find on the internet feed into this “diet intention” by informing you how to “avoid weight gain” by filling up on protein or veggies, or simply “eat before the party” to make it easier to avoid indulging once there.

Admittedly, I will often eat before going to parties because I’ve been in too many situations where either not enough food was served, or not enough options for me to feel satisfied (both nutritionally and craving-wise).

It is important that we are intentional about our food choices (i.e., making sure we’re eating enough, and making good nutrition a priority first and foremost) without denying ourselves foods that aren’t as healthful.  You can eat both healthy and less healthy options. They aren’t mutually exclusive and can fit in nicely within the scope of a healthy and balanced diet.

2). Avoid the Pendulum Swing Between Restriction and Overeating

Intuitive eating aims to help people avoid an “all or nothing” mindset that can lead to unhealthy habits, like a restrict-binge cycle that can be very hard to break. By choosing foods you really want to eat, and enjoying them in moderation, it is much easier to avoid the foods you can live without. You might actually be surprised to discover that certain foods you’ve put on the “bad” shelf — thus making them more appealing — aren’t actually that appetizing once you allow yourself permission to eat them when you want.

Tribole says “It’s important to not make holiday foods off limits—because the allure of forbidden fruit will only get stronger.” This leads to an increased chance of binging on off-limits foods when the opportunity arises.

3). Increase the Satisfaction Factor of Food

During the holidays, delicious eats are usually abundantly available. Rather than think about what you shouldn’t eat, it’s much more satisfying to think about what you actually want and like. Maybe those store-bought cookies your colleague brought to the office aren’t actually that appealing. Take a moment to reflect on your favorite holiday foods, and save room for them.

When attending parties, narrow in on the foods you really want. Eat until you are satisfied, not stuffed. Taste and feelings should both be honored in the decision making process. Certain foods might satisfy a nostalgic need, while others might simply be a matter of preference. Whatever your reason for choosing or avoiding a particular food, it should be because you truly want/don’t want it, not because you’re trying to avoid weight gain, or guilt.

This is a core principle of intuitive eating, and making nourishment throughout the day a top priority is a crucial aspect of maintaining balance.  Resch points out, “If you have primal hunger when you walk into an event, [you’re] not going to fully enjoy the food,” for physiological, neurological, and biochemical reasons.

If you’re someone who often compensates for a holiday meal/event by skipping meals during the day, Tribole says this will likely backfire: “When you combine being too hungry with delicious holiday food, it makes it more likely that you will overeat.”

It may not feel intuitive to plan ahead for meals and snacks to avoid long gaps without eating, but it’s important for self-care and blood sugar balance. It’s all too easy, especially during the holidays when our schedules can be quite busy, to forget to eat. Ensuring you always have healthy food on hand will keep you more in-tune with your hunger and fullness cues, and better able to be mindful about food choices.

5). Saying “No” Is Totally Your Right

As hard as it can be sometimes to allow ourselves to enjoy holiday foods we like without guilt, it can be even harder to say no to food we don’t want, but someone is pushing on us.

We all have those people in our family, or friend groups, who like to push food on people. Grandparents are notorious for this, “Come on! Eat a slice of pie, there’s so much left!” They might lay the guilt on really thick, but here’s the deal: it isn’t your responsibility to make someone happy by eating things you don’t want to eat, especially when you’re full.

Setting boundaries isn’t rude. It’s a sign of self-respect. If saying “no” is a challenge for you, try practicing ways to politely say it. A good example is: “That looks so delicious. I’m very full, but I’d love to take a piece to go and eat it later.” Or if the food doesn’t appeal to you, be honest: “Thank you for offering. I’m not a cheesecake fan, but it looks really good!”

There are so many nice ways to say “no” without insulting a food pusher. Repeat yourself if you need to. Be firm and committed. Don’t let people make decisions for you, especially when it comes to your body.

6). Make the Holiday Your Catalyst for Change

Rather than giving in to mindless eating during the holiday with the intention of embarking on a diet in the new year, try this on for size: don’t diet.

Diets hold the same problem for me that Romantic Comedies do (even though I love a good Rom Com; it’s a complicated relationship): you never see what happens next, after the guy gets the girl (or vice versa), or the opulent wedding, etc. You watch a climactic build up to a big event over a 90 minute timeframe and then…cue end credits. You don’t see the silly arguments that will inevitably pop up about how to load the dish washer, or not closing the fridge door all the way (a common one in my house). In short, you don’t see the work that goes into making things work. Diets, like Rom Coms, make you believe that good things can happen with little to no effort. This simply isn’t the way things are in reality.

Intuitive eating isn’t a diet. It’s a lifestyle, and a daily choice, to show up for yourself; to set healthy boundaries, prioritize self-care, allow space for your favorite foods in moderation, and cultivate intentional food habits, such as planning head. It isn’t built around a stressful and unobtainable goal to be “perfect.” It is built around the idea that what you eat a majority of the time is what matters. One snack or day of eating that isn’t “healthy” will not wreck your body or your life.

The holidays can be stressful enough between flight delays, snow days and fewer hours of daylight. We don’t need to add extra anxiety in to the mix, by agonizing over our food choices. I can’t promise that it will lead to “Peace on Earth,” but it can certainly lead to a peaceful relationship with food, and that’s worth a fresh-baked gingerbread cookie. Maybe two.