What to Expect from Your First Yoga Class

OK, I admit it: Up until a few weeks ago, I had never tried yoga. Despite the hype and how many people are raving about it, yoga just didn’t pique my interest. As I’ve documented at aSweatLife, my go-to form of exercise has pretty much always been running. Over time, I’ve learned to love lifting weights as well. But for some reason, practicing yoga had never been at the top of my to do list.

But after checking out the list of classes my gym is offering this fall, I decided to take a whack at it. After all, what’s the harm in trying something new? So one Saturday morning, I headed out the door to my first yoga class, one that was conveniently named just “Yoga” by my gym so I truly had no idea what style to expect. After 50 minutes, I left feeling calmer yet more energized for the day ahead. And most importantly, I had fun. 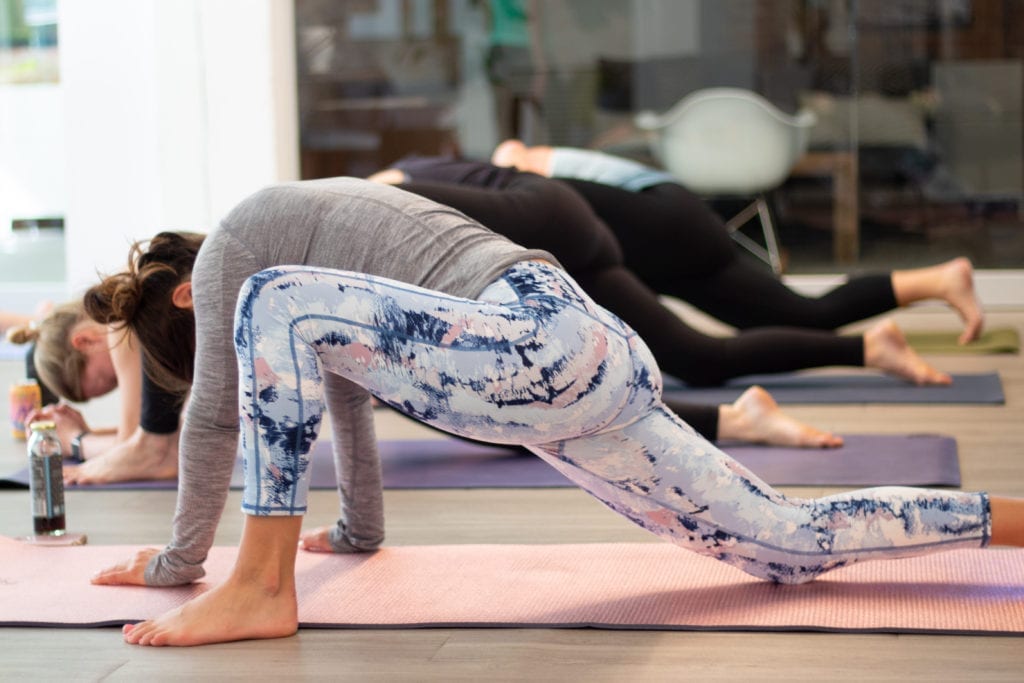 Here’s a closer look at what to expect from your first yoga class:

Mats and no shoes.

When I arrived at the gym, I saw people carrying mats into the room in which class was held. For a split second, I panicked because I hadn’t brought my own mat. But then I noticed the large container of mats provided for participants. After grabbing a mat from the bin, I found a spot on the floor and looked around, noticing everyone was either barefoot or only wearing socks on their feet. There was no need for my Nikes, so I took them off and put them in a cubby.

The cycling and HIIT workout classes I’ve attended this fall were full of fast-paced pop and hip hop music. But — no surprise here — the yoga class was not. Instead we listened to soothing, meditative music. It was the perfect background noise as the instructor led our group.

A focus on stretching and flexibility.

Before attending class, I knew of a couple yoga poses, but I wouldn’t say I was well-versed in the art of yoga. So when I showed up, I wondered what we would do for the majority of the 50 minutes. Would we quickly move from pose to pose? Would I be expected to do really complicated poses?

The best way I can describe how we spent the class is stretching and slowly trying out different poses. Nothing was rushed, and I didn’t have to do anything beyond my skill level. The instructor led the group from pose to pose, taking time to explain exactly what to do with our bodies. Some of the poses required quite a bit of flexibility, but everyone was encouraged to do as much as they could without going beyond their limit. By the end of class, my body felt much more open, relaxed and loose. It was by far the best stretch I’ve had in a long time.

At the end of class, everyone lay on the floor, closed their eyes and relaxed. We remained in those positions for a couple minutes, though I wish it could have lasted longer. This savasana was a perfect time to take some deep breaths and meditate.

A sense of energy and tiredness (but not utter exhaustion).

When I finish a run or HIIT class, I feel tired down to my core. My heart is racing, there’s sweat dripping down my body and all I want to do is collapse on the couch. When I left yoga, I wasn’t in such a state of exhaustion. I still needed a shower, but I wasn’t too tired to move. Instead, I felt more awake, invigorated and ready to take on my day.

If you’re feeling nervous about trying yoga for the first time, take it from me — you can do it! Of course, every yogi will have a different experience depending on the style of yoga he or she chooses to practice. But hopefully this general guide gives a glimpse at what an average class looks like.