Conquering the Fear of the Weight Room 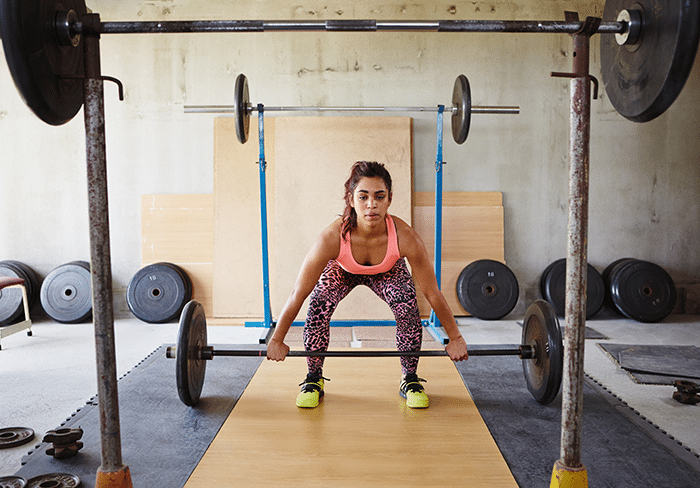 I’ve always been a small person.

When I was born, I weighed in at a whopping 6 lbs. 1 oz. And I arrived 20 days after my mom’s due date. On the day I was finally born, the nurse took one look at me and asked if I was premature. My mom just about died — how could a baby who had been inside her for over nine months be premature?

At one year old, I only weighed 16 pounds. My parents had to go to a dietician, who told them to track what I was eating. It turns out that that I was eating perfectly right — I was just tiny.

Not much has changed since then. As much as I love to eat, my body is simply small. It probably hasn’t helped that my lifelong go-to form of exercise has been running.

When I go to the gym, I head straight to the treadmills. I feel confident there — I know I can run for a long time, and running has always made me feel healthy. I’m almost addicted to getting a runner’s high. I ran track as a kid, I ran cross country all through high school and I kept up the habit during my college years.

Throughout my years of running, I never second-guessed my tiny build. When I was a little girl, I told everyone I was “puny” — and that’s the way it was. In fact, I figured my petite frame helped me be a better runner. For runners, smaller is better, right?

Well … sort of. Though it would have been helpful, my high school cross country team never did any strength training. I can only remember going into the weight room once during my four-year tenure on the team. To me, the weight room was a dark and scary place, where football guys walked around in beaters and practiced punching a frighteningly human-like dummy. I hated going into the weight room. I needed a special lightweight bar for bench pressing. Meanwhile, over the years, the football players had maintained a written record on the wall of the players who had benched the most weight. All the lifting records were more than twice my weight.

I never would have admitted it, but I was embarrassed. I wasn’t strong, and the signs were unavoidable. While working as a stagehand in college, I could barely lift some of the platforms my coworkers and I were required to move. “We need to get you to the gym, girl!” a fellow stagehand told me as I struggled. I knew I was weak, but I was too afraid to do anything about it.

During my junior year of college, my now-fiancé, Luis, suggested we do some strength training routines. He introduced me to arm and leg exercises, bench pressing and squatting, but I was still hesitant. While doing lunges with dumbbells one night at my college’s rec center, a strong man with the figure of a body builder approached Luis and me. “Here, maybe you should try a lighter weight,” he said, handing me a lighter dumbbell. “Maybe she wouldn’t be struggling if you taught her how to do lunges right,” he added, looking at Luis.

That body builder’s attitude epitomized my fear of the weight room. What if I accidentally did something wrong? What if another beefy guy approached me? What if everyone was secretly laughing at me, the wimpy girl, behind my back?

When I moved to Chicago last summer, I knew I had to do something to conquer my fear. I experimented with at-home strength training exercises using the few dumbbells I owned. I tried out multiple gyms and a personal trainer. I looked online for tips about overcoming anxiety about the weight room. I even considered buying my own bar and squat rack so I wouldn’t have to lift in front of people at the gym. But I still felt afraid.

Eventually, I joined a gym I liked and hit a breaking point. I thought about my fears — lifting incorrectly, being approached by a fellow gym-goer, secretly being mocked — and I realized — who cares? Who cares if I do an exercise incorrectly? Chances are someone will show me the safest technique to use. Who cares if someone talks to me like the body builder at my college gym? He was probably just trying to help. Who cares if people are laughing at me? I’m giving it a shot, and it’s more than likely that I won’t ever see them outside the gym.

So I went for it — I started using the free weights at my gym. And after meeting with a trainer, I learned how to use the gym’s weight equipment as well. I was flooded with relief and the sudden realization that I’d conquered my fear.

I’m still a small person. I haven’t beefed up too much, and I’m far from being an extremely muscular young woman. But conquering my fear of the weight room was an enormous step in my physical and mental wellness, and lifting weights has helped me feel stronger and healthier than ever before.

1 thought on “Conquering the Fear of the Weight Room”