How to Make Bone Broth in an Instant Pot

I’m currently cuddled up in bed, surrounded by the warmth of two (yes, two) down comforters and in-between swigs of a warm, homemade batch of bone broth. What can I say? In Chicago winters, I’m all about that hygge life. 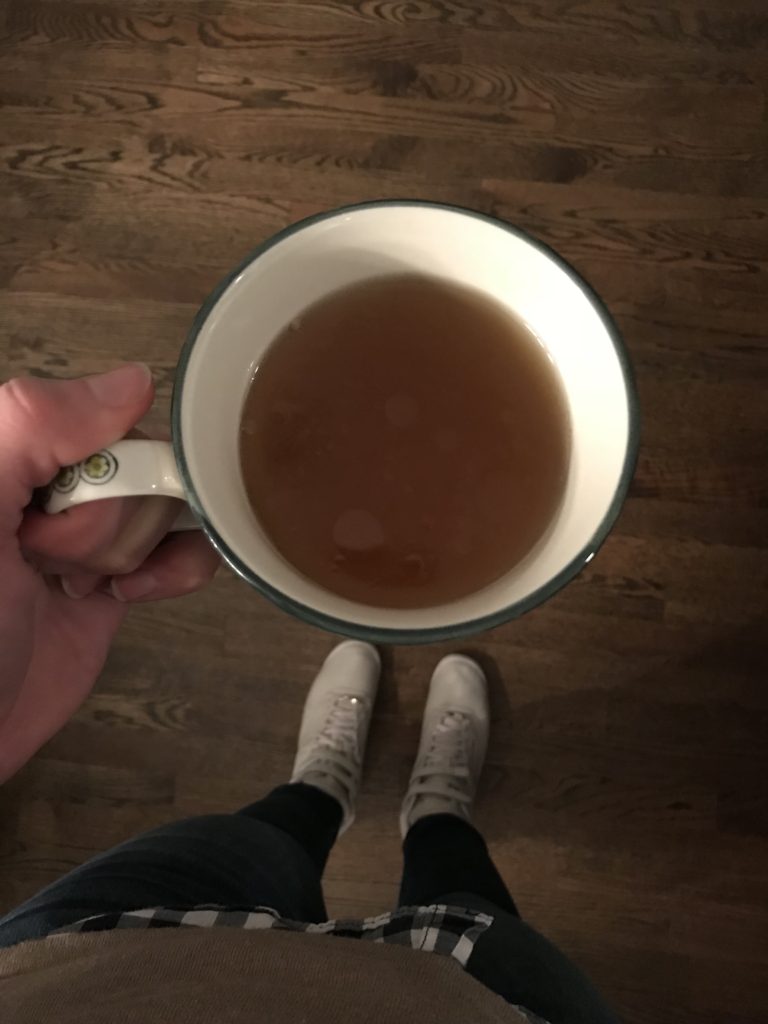 When it comes to trying new food trends and fads, I’ll try just about anything once. Turmeric latte? Delicious. Kombucha? I’m on a life-long mission to drink them all. Acai bowls? Been there, paid $12 for a bowl of that. But, admittedly, when I heard about bone broth I was a little bit skeptical. The name itself doesn’t scream “appealing” to me.

I had heard about bone broth over the course of the last year or two, but I never went out of my way to give it a try – let alone make my own batch at home. While I like to try new things, I find myself wading into them slowly and methodically; my boyfriend Tyler’s personality exists in stark contrast to mine on this front. He dives into things head first, ambiguity be damned. Shortly after Tyler heard about the alleged benefits of bone broth, we quickly found ourselves at the meat counter in Whole Foods asking a lot of questions like, “so can we just buy… bones?”

In our household, Tyler is the keeper of all things Instant Pot. We received one as a gift in December, and I’m pretty sure 90% of our meals have been cooked in it since. Who needs a kitchen anyways? After five batches of trial and error, the following is Tyler’s DIY Instant Pot bone broth recipe:

How to Make Bone Broth*

Step 1: Wash your bones. For beef bones, you can typically wash them in the sink. If you want to add in chicken and pork bones (or chicken feet, if you’re really feeling adventurous), you can clean them in boiling water for ~10 minutes.

Step 2: Chop your veggies. They will be strained out later, so don’t worry about chopping finely. Large, easy chops will do.

Step 3: Put the bones and veggies into your Instant Pot and fill it with water, just below the max fill line.

Step 5: Add soy sauce, salt and hot sauce to taste. (Tyler recommends “dumping in” soy sauce, and he’s not afraid of excessive salt. He also uses 6 drops of ghost pepper sauce to give it a kick).

Step 6: Strain out the bones and veggies. Serve or store the broth. (Note: when you store it, you might notice a thin, white layer of fat that forms on top. It’s OK – and recommended – to remove the excessive fat. The main benefits are in the jiggly broth itself)

If you give it a shot, most people recommend drinking a cup daily. Many people opt to replace a cup of coffee with a cup of bone broth in the morning. I find myself heating up a cup of it as I’m winding down for the day (I’ll never be able to replace a cup of coffee, let’s be honest). Admittedly, the taste of bone broth isn’t favorite thing in the world, but there is still something relaxing about it that I welcome into my nighttime ritual. It’s certainly drinkable and warm. Plus, the potential benefits make it worthwhile. **

Have you tried bone broth before? Have you ever made it at home? Let us know in the comments as the recipe continues to evolve over here.

*Tyler claims the recipe is extremely forgiving, so don’t worry too much about the exact measurements.

**On day three of drinking bone broth, I woke up and freaked out, swearing that my hair was shinier than it’s ever been. Tyler said I was a crazy person. The verdict is not out yet (on my hair or on my sanity).