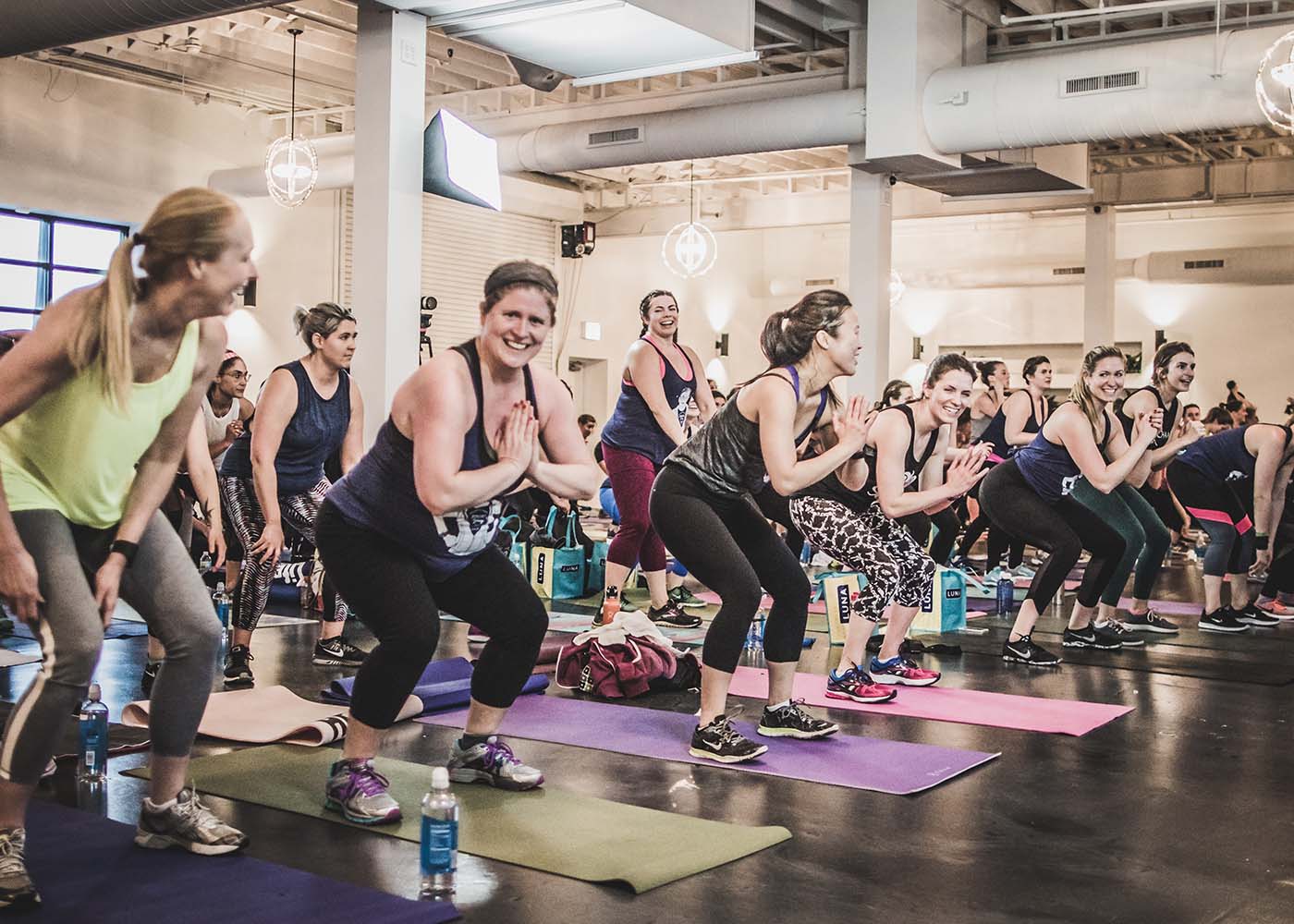 (Photos in this post are by Christiana Basso – the full album of #SweatToInspire photos are here).

At aSweatLife, we believe that fitness is the catalyst for living your best life. Equal Pay Day – a day devoted to recognizing that women are paid approximately 80 cents on the dollar when compared to men – is no different.

On the day, which fell on April 4 this year, we partnered with LUNA to recognize that empowered women empower women at an event we called #SweatToInspire.

At The Lakewood, an amazing event space big enough to hold the energy of this group, we decided to embrace the shine theory – something that we believe to our core. We showed it instead of talking about it. The shine theory – the theory that together, we all shine brighter – is the belief that jealousy is limiting and can often be misdirected towards other women doing great things.

Because we believe there’s enough success to go around, we asked some women we admire for the big things they’re doing to stand up and share their stories.

Sarah Spain, a major contributor to ESPN talked about how she broke into a male-dominated profession and not only survived, but thrived.

Spain told us about a time in her career when she used to have to fight her way into locker rooms – from the Blackhawks’ locker room to the Chicago Cubs’ and what it took to overcome the forces that were trying to keep her out.

Ultimately, Spain was given the advice to be so good that no one can stop her and that carried her through her career and all the way to ESPN where she’s one of the hardest working women you’ll ever meet. She has her own podcast and column, both titled “That’s What She Said,” is the co-host of two national ESPN radio shows and regularly appears on SportsCenter, “Around The Horn” and other ESPN TV properties. 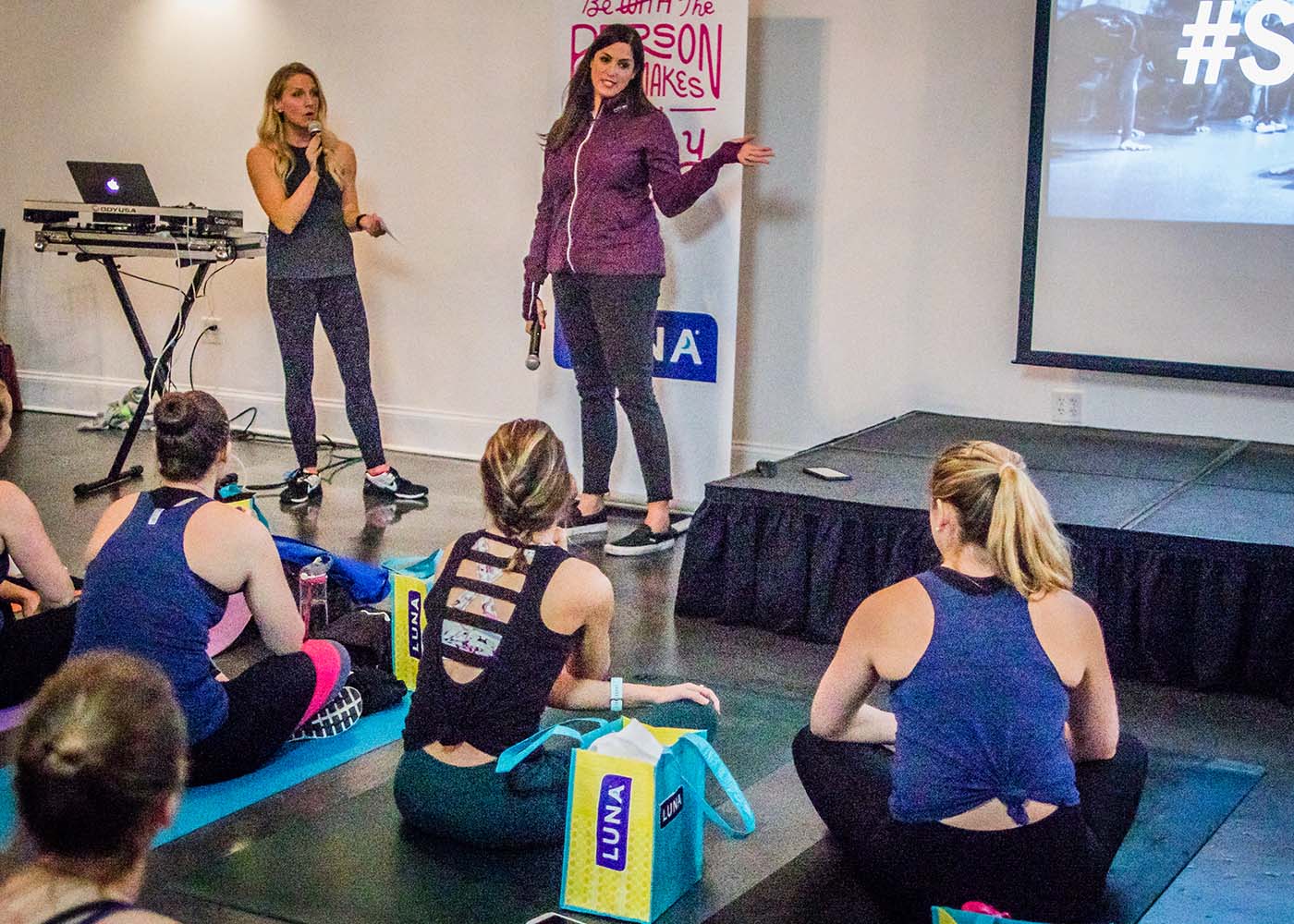 After hearing from Spain, I said, “That’s amazing,” referencing her climb to where she is today.

“It’s bullshit,” she replied referencing all of the things she had to overcome.

“You’re right,” I said realizing what she meant.

Sarah Ames, a partner at Quarles and Brady Chicago shared how she used the World Marathon Challenge to bring awareness to the plight of African women who suffered from injuries during childbirth with Hamlin Fistula. She ran seven marathons on seven continents in seven days and used that incredible feat as a platform to raise awareness and funds. 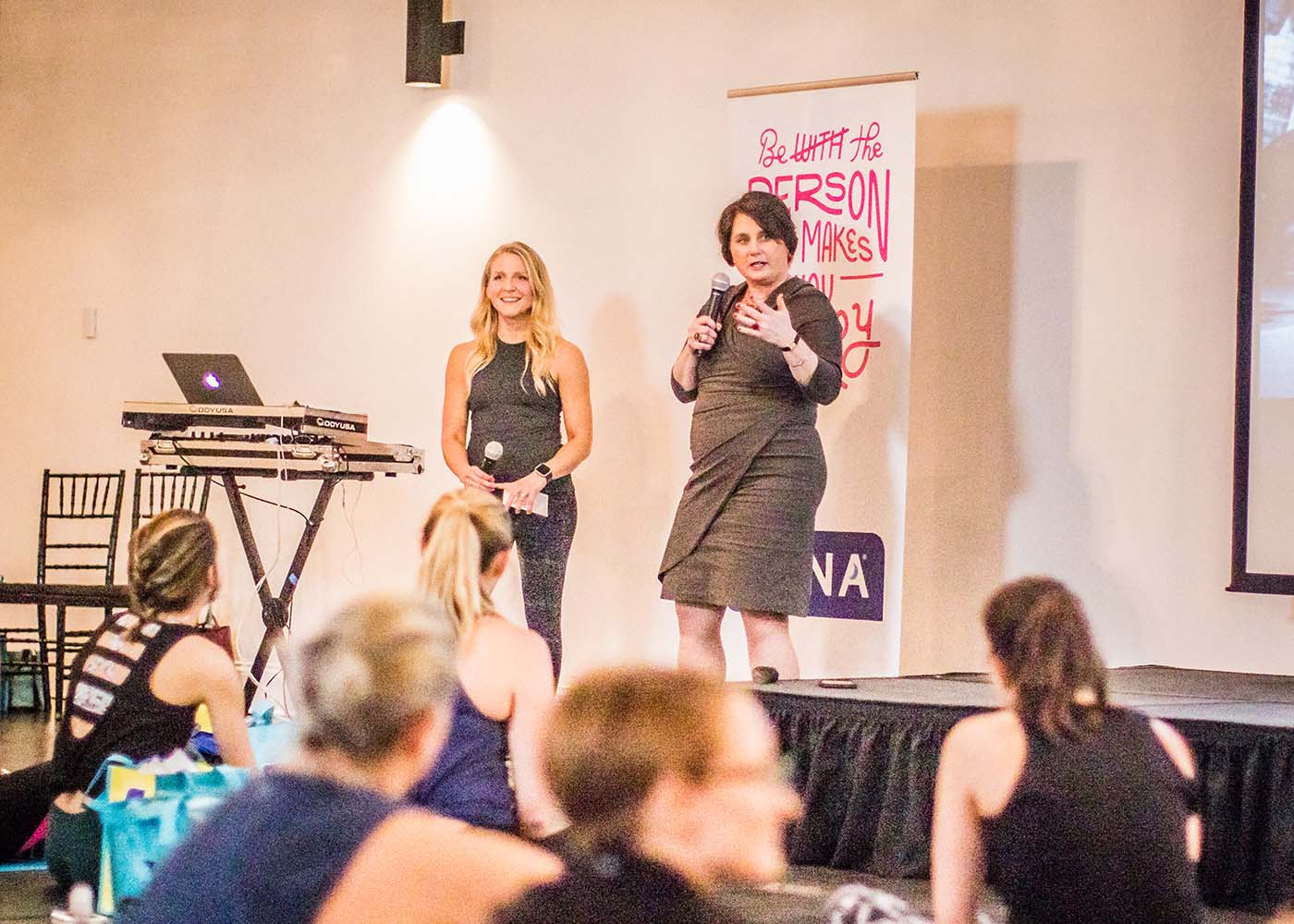 “I don’t even particularly like running,” Ames said, “But I just wanted to do it.”

The simple act of wanting to do it and wanting to impact the lives of women who don’t have access to basic medical help carried Ames to do something so incredible, it’s jaw-dropping.

After those inspiring words, we took on a sweat inspired by Ruth Bader Ginsberg’s workout, recently published on Politico.com that was led by Emily Hutchins. Emily owns On Your Mark Coaching and Training, is a Nike Master Trainer and has a presence that leads to big effort.

Here she is holding a microphone and doing slow single-armed push-ups while everyone else in the room uses two arms. 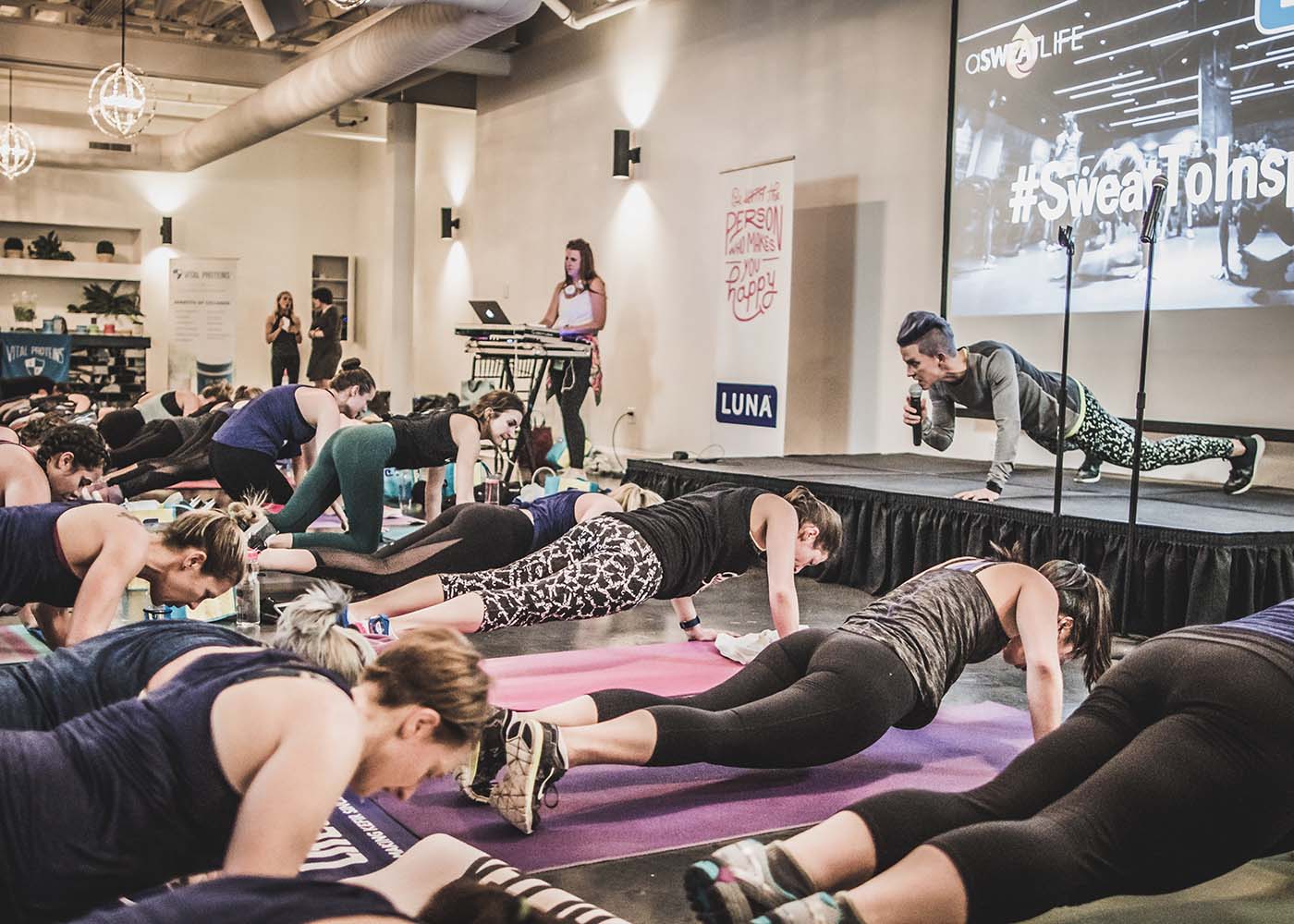 After Emily got the room sweating, Soren Buchanan who teaches at The Lab took the room through a yoga practice that was strong and beautiful – all in line with the theme. 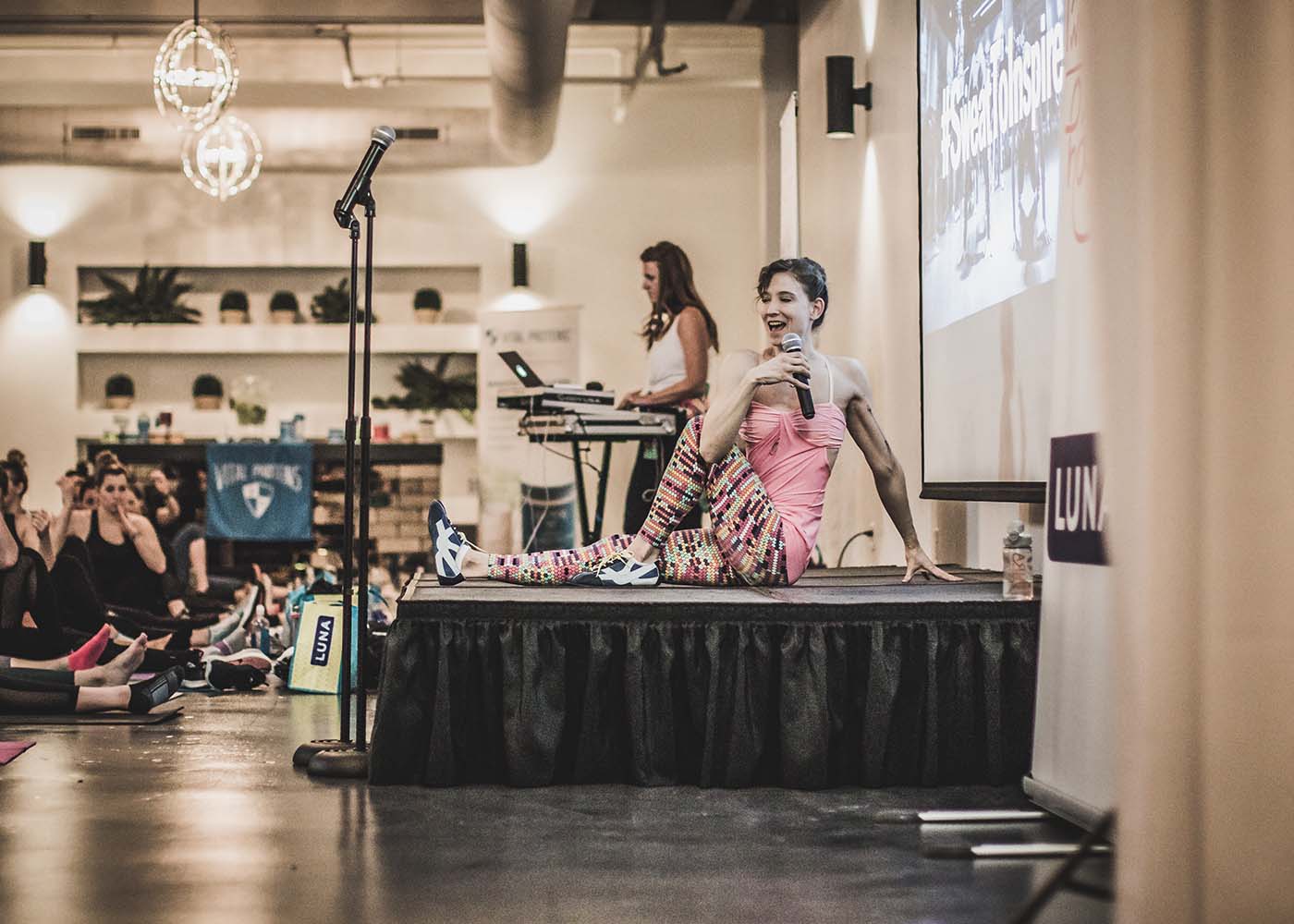 A portion of the proceeds from our event went to the Step Up Women’s Network, but LUNA is stepping up its giving efforts and is making the pay gap sting a little less.

The brand partnered with LeanIn.Org’s #20PercentCounts campaign and AAUW to help raise awareness for the gender pay gap. LUNA spokeswomen Gina Rodriguez of Jane The Virgin appeared on The Today Show to talk about the brand’s initiatives. On the show, Gina highlighted the work that LUNA is doing with LeanIn.Org and AAUW will help fund salary negotiation workshops across the country. And this initiative could eventually have a major impact. Salary negotiations are often argued to be the point where the pay gap emerges. According to Salary.com, 46 percent of men always negotiate salary following a job offer, compared to just 30 percent of women. 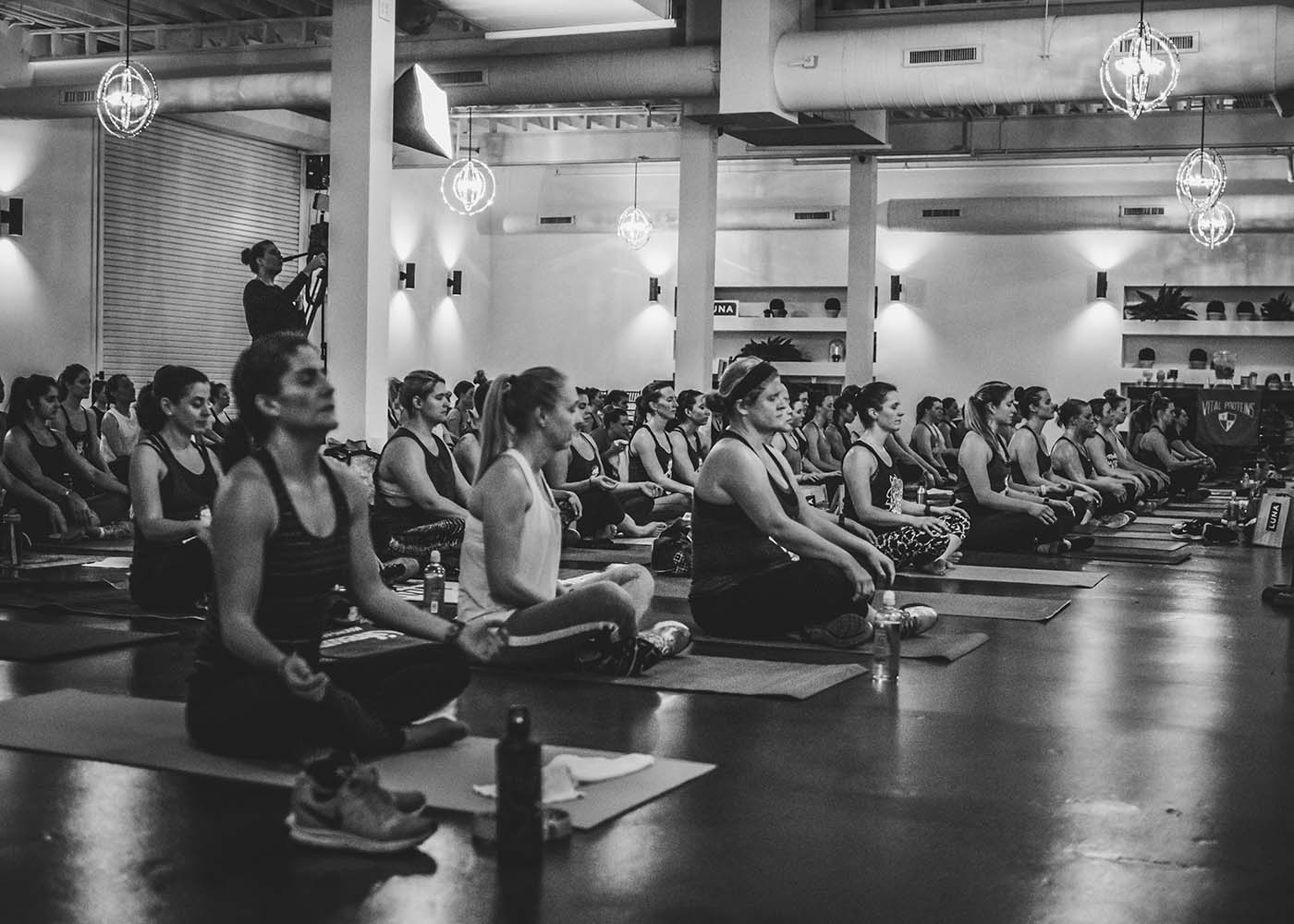 With Equal Pay Day behind us, we can’t help but feel more connected. Just as we love to take on workouts with friends at #Sweatworking, the excitement with more than 100 of our closest friends at #SweatToInspire was palpable. We gathered over a greater sense of purpose behind our workout and left feeling inspired and connected.