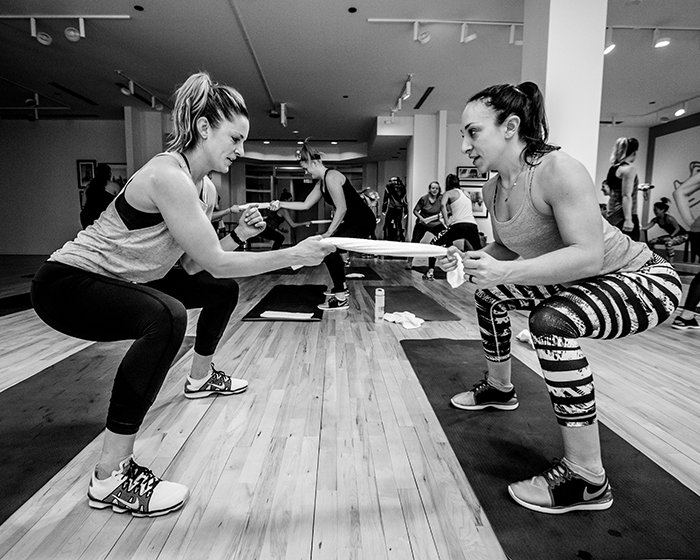 In high school, a mean classmate once laughed at my arms. “You look like a guy,” he snickered, pointing at my biceps. “Why are they so big?” I blushed as I wrapped my big arms around myself, blinking tears out of my eyes, trying to stammer a witty response that would put this bully in his place.

I was a tiny little thing when I started high school. All arms and legs, flat-chested, no curves. My younger sister’s size 2 dresses engulfed my skinny frame. I remember feeling so upset that nothing ever fit right; it was embarrassing that I didn’t have hips or boobs.

Running track and cross-country didn’t help matters. We never hit the weight room (a term I use loosely for our ramshackle collection of four or five machines) during cross-country season, and the space was primarily a spot to do crunches after track practice. By junior year, however, I started working out with another school’s track coach during the off-season, and I learned that strong arms could power me around that final brutal curve in the 400-meter dash.

Push-ups became part of my morning routine. And just like that, my arms swelled like Popeye’s. I was a skinny string bean with bulging biceps. Strong enough to probably beat that cruel classmate in an arm wrestling match but suddenly embarrassed and ashamed of my muscular physique.

Those memories came flooding back recently. First, a friend balked when she saw a photo of herself after a crazy-hard Orange Theory class we attended for her bachelorette party. (Yes, that’s what she wanted to do for her bachelorette. Because she’s hard-core and fearless when it comes to fitness). To my eyes, she looked incredibly fit, toned and buff. Her response? “Why do my arms look like that?! They cannot look that big at my wedding!”

Then, only a few hours later, I tried on another friend’s lengha, which she was lending to me for her upcoming Hindu wedding. It’s a three-piece ensemble: a gorgeous full skirt, a belly-baring crop top and a long, drapey scarf. Well, that beautiful hot pink crop top with its sheer elbow-length sleeves did not want to budge past my elbow. No matter how I tugged and wiggled, those sleeves came to a dead halt. They were stretched to the max right at the base of my bicep.

To be fair, the friend to whom these clothes belong is 5-feet, 3-inches tall, and I have a good 2-3 inches and 20+ pounds on her. Still, as I sadly folded the top, I couldn’t help taking a quick sideways look in the mirror. Were my biceps too big? Had I pushed things too far? My long-ago classmate’s taunts echoed in my ears.

But then I thought about some of the strong – and I’m talking internally and externally – women I admire. Women like Michelle Obama. Venus Williams. Antonia from StudioThree. My mom. My fellow aSweatLife writers.

I thought about my wedding photos, especially the photos in profile, where my nicely flexed arms grasp my bouquet and my smile could light up a million nights.

I thought about “strong is the new skinny,” “sun’s out, guns out” and “girl power.”

I thought about how awesome it feels when I switch out the water cooler at work like it’s NBD. (Look, those things are actually really heavy, and I’m fairly certain some of my coworkers purposefully leave a small amount of water in the tank so they don’t have to do it.)

I thought about all the fantastic women I’ve met at #Sweatworking events who reach for the heavier set of weights, every damn time.

I thought about biceps. And I decided it’s time to give biceps their due. Ladies, will you join me in the #BicepsRevolution? Pull on your tank tops, strapless dresses and sports bras. Flex those bad boys for all the world to see. Do those push-ups and pull-ups and planks and curls and runner’s arms. We are women with big biceps … hear us roar!