In Defense of the Treadmill: Running on a Treadmill vs Running Outside 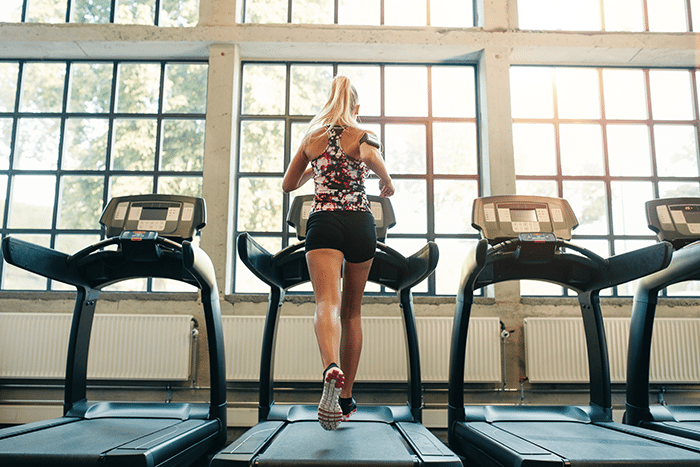 When I started incorporating speed workouts into my training, I rediscovered my appreciation for the treadmill. It was so much less stressful to plug a number into the dash, then focus on running, rather than sprinting all-out, checking my watch repeatedly and confusing myself as I tried to mentally calculate paces (never mind the difficulty of finding a convenient track nearby in Chicago).

The treadmill may be known affectionately as the dreadmill, but the truth is, it has several advantages over running outside. Setting a certain pace (something I’ve come to rely on during my tempo runs). Weather proof. Bathrooms nearby. Water bottle and fuel on hand, plus maybe a little sweat towel if you’re feeling fancy. Less layers. HGTV. Need I go on?

However, running on a treadmill doesn’t give you license to zone out completely; you still have several things to keep an eye on and adjust constantly. Here’s a quick look at how you should run on the treadmill in order to get the most out of your workout.

According to Women’s Running, treadmill running and outdoor running differ in three main areas: surface, surrounding and biomechanics. While studies have shown that outdoor runners  have the same running mechanics as treadmill runners, one thing has been shown to differ: stride length.

According to Breaking Muscle, the stride length of runners tends to increase on the treadmill. Runners (especially those who use the treadmill for speed workouts) can easily get a little too ambitious with their pace, setting it a little higher than normal or sprinting at an unsustainable pace. When your legs get going that fast, your stride gets too long for your body, making you look like a Looney Tunes characters.

This increase in stride length can wreak havoc on your running form. Instead of your foot striking the ground underneath your hip, your foot would strike way in front of you.

Run in the middle of the belt

Be aware of where you’re running on the treadmill belt. Too close to the front and you won’t be able to extend your arms fully, meaning you lose some good momentum. Too far back, and you’re at risk of falling off (plus, it’ll be a lot harder to read the subtitles of the show you’re watching).

Cosmopolitan (not a typo) suggests this: “To check your positioning, pump your arms high as if you’re grabbing a pencil behind your ear every time one of your hands swings forward. If you hit the front handles en route, back up on the belt to swing free.”

As long as I’ve been running, that’s been the rule of thumb: in order to mimic wind resistance outdoors and make up for the fact that running on a treadmill is inherently easier than running outside (thanks to the propulsion of the belt, which speeds up your leg turnover), you should set your incline to one percent.

Not so fast. According to this Runner’s World article, setting your incline at one percent really only mimics the outdoors if you’re running at a 7:09 pace or faster. Most of us aren’t, so it’s a moot point.

Instead, you can challenge yourself by using the 5K workout pre-programmed workout setting on your treadmill (seriously, one of the hardest workouts I’ve ever done). On this setting, the treadmill will take you through a 5K, changing the incline each minute and taking you from flat road to steep, Heartbreak Hill inclines. Or, for longer workouts, adjust the incline yourself every minute or so. In addition to providing more of a challenge, this will keep you distracted and make your run less of a mental struggle.

Don’t give up your outdoor runs

For all the benefits a treadmill has, there are some things it simply can’t help you train for, the most significant of which is terrain. A nice, cushy treadmill belt may be ideal for your aching joints or for coming back from injury, but you’ll never be able to mimic the tiny explosion necessary to hop over a curb or cut sideways to avoid dog poop. Similarly, you’ll never be able to run on different surfaces, which works the muscles in your feet (running on a gravel path works different muscles than running on a treadmill).

The best thing to do? Do speed workouts and shorter runs on the treadmill, but keep your long, easy runs and recovery runs outdoors. You’ll get the best of both worlds, and probably enjoy a few episodes of HGTV along the way.