This summer, Nike challenged Chicago to have its first, fastest or funnest mile with its Find Your Fast Campaign. If you accepted the challenge, you could access new workouts every week in the NTC app throughout the 12-week program.

In Chicago, we’ve learned to expect something special from Nike. Not only did we get access to the 12-week Find Your Fast program through NTC, we were invited to take advantage of everything from live workouts around the city to a run with Kevin Hart.

Some of Chicago’s strongest women came along for the ride: a handful of the city’s female firefighters who use their strength to save lives were right in the front row of the workouts. Among those women was firefighter Bridgette Tertell.

Meeting with Tertell, I could barely contain my excitement. As the daughter of a firefighter, I’ve always respected the women who worked alongside my father and other men like him. We had a strong-is-strong mentality at my house, with my mom coining the adage, “Man, woman or robot – I don’t care who you are as long as you can carry my husband out of a building.”

I waited at a table for Tertell, not knowing what to expect, watching several pick-up trucks drive into this lunch-spot’s parking lot, thinking, “That must be her.” When Tertell – tall, blond and beautiful with an equally beautiful one-year-old in-tow – walked in, I had to check myself. Not all firefighters fit into the mold of my father and this particular firefighter’s mold was pretty refreshing.

It hasn’t always been easy to be a female firefighter. In 1986, the first female firefighters found their way to the Chicago Fire Department after passing challenging physical tests including “timed exercises of hanging from a pole, climbing stairs carrying a 60-pound coiled hose and pulling a 150-pound dummy across a room without its feet touching the floor” the Chicago Tribune states.

According to the New York Post, women account for 3.4 percent of the Chicago force – a small, but growing piece of the department. That number was just over 2 percent in 2011.

Tertell and the other female firefighters who took part in Nike’s Find Your Fast challenge were able to work on one thing – among many – that helps them do their job safely: strength.

Tertell said that she has to work to stay strong, not only to perform the functions of her job, but to keep everyone around her safe.

“I have to make sure that I know what I’m doing and that I do it well,” she said. “It doesn’t matter who you are or what nationality you are, you just have to be able to do the job – not only for the patients, but also for your co-workers.”

When your body and its strength are your job, you need to take great care of it – giving it what it needs to recover, grow stronger and provide you with the strength you need so you can rise to whatever occasion presents itself to you.

According to Nike, the Find Your Fast NTC Challenge was specifically designed to improve speed, power and agility through a diverse set of daily workouts.  For Tertell, that helped to augment what she’s already doing to stay strong and to provide her with a community of other strong women along with way.

Tertell joked that she made new, strong friends who were game for some healthy competition. “I met a lot of awesome women – even women from the fire department that I hadn’t met before.” 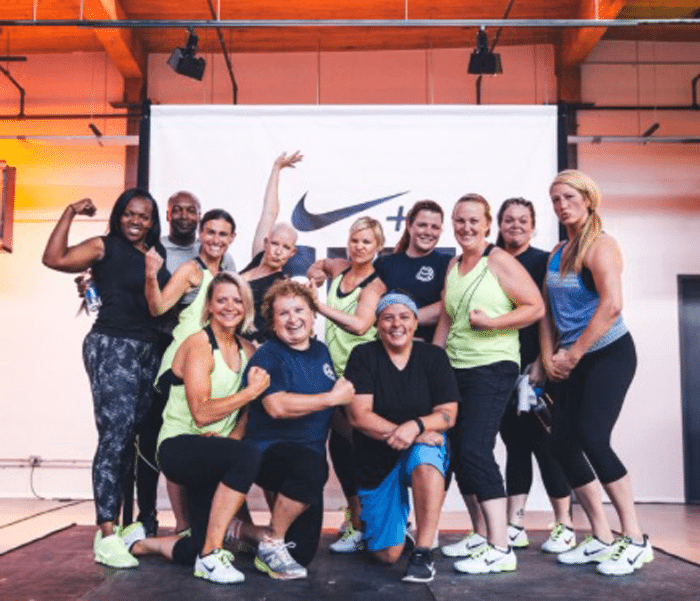 Now that the challenge is over, Tertell is using Find Your Fast to propel two of her personal goals: losing a little weight she says is left over from having her baby and making a comeback as a champion in the Battle of the Badges, a charity boxing match between the fire department and the police department in Chicago.

“They stopped it in the middle of the second round. So I would like to do that again,” Tertell explained her swift victory during her match four years ago as her baby started to adorably squawk.

“She doesn’t want to see her mama get hit,” I joked.

“Don’t worry. Mama will be doing the hitting,” she said.