“It shouldn’t be a success story.”

Ying looks up at me with a serious face (he rarely wears a serious face, he’s definitely the jokester type). He continues, “Because, well, this isn’t a success story. It’s an ongoing thing.”

Four years ago, Ying Maneein, a humble Chicago barber and inspirational speaker, paused his music career. In fact, he hit pause on a lot of parts of his life. He was lost, uninvolved and overweight. He was, as he puts it, “sick and tired of being sick and tired.”

Three years ago, Ying made a plan. “You can’t look at the big picture or the end goal all the time because it’s too big. It’s scary. It’s intimidating. You can’t just say I’m going to lose 100 pounds. You can’t just say that you’re going to run a marathon. It’s about baby steps, it’s about something you have to work at day by day, week by week.”

And three years ago, that’s what Ying did. Every day, he looked at working out and other life improvements (including working on his public speaking) as a job. It was a small daily job, and inch by inch, Ying took control of his life again. He made a plan – he’d get up, go to the gym, run a little and lift some weights. It wasn’t fun and it wasn’t easy, but it was a job he felt he needed to do; it was a job he felt he owed to himself.

“I noticed what I looked like in pictures, I know others did too. I wasn’t happy with who I was. I needed to grow.”

I am in the same Toastmasters Club as Ying. Ying started out too nervous to introduce himself during the meetings. If you come listen to Ying speak now, you’d never know he was shy. His speeches are always inspirational, enthusiastic and almost always preach the same lesson: growth and improvement.

“We all have goals”, Ying told me, “growth is the main goal in life. You don’t want to look back in a few years and realize you are the same person.”

Last year, Ying was 100 pounds less than he was before. He signed up for the Chicago Marathon. And it hurt. He sent me this picture of him at mile 20: 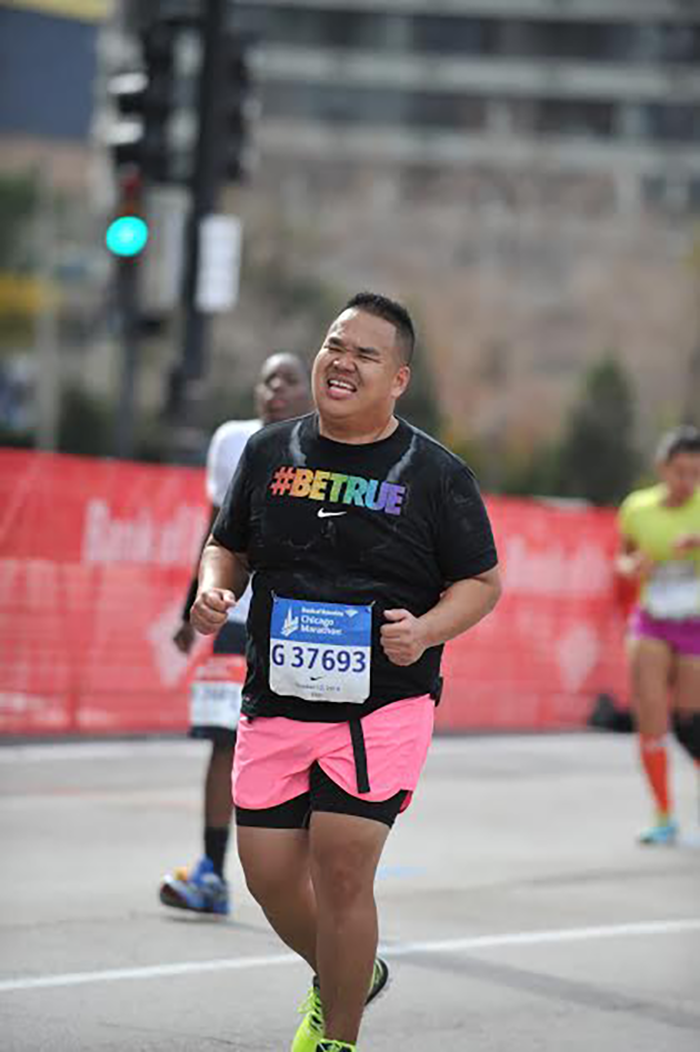 I laughed at the expression of his face when he’s clearly hitting a wall (I know the feeling well). To which he responded, “I like pain. Pain means you are doing something out of your comfort zone. That kind of pain is good for you.”

But like Ying said in the beginning, this isn’t a success story, it’s an ongoing one.

Ying gained back some of the weight, but he keeps his confidence and resilience. And instead of viewing working out as just a job these days, he’s concentrating on keeping it fun too.

“I love basketball. I suck, but I love basketball anyway – so I’m still going to do it. Working out should be fun. If you aren’t having fun and it’s only a job like it was for me, there’s other options. Don’t settle for something you don’t like. I realized that it can be both a job and fun.” 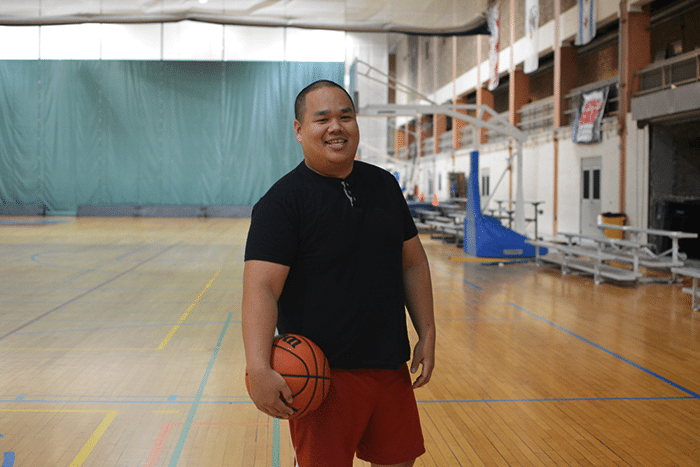 We talked about happiness for a while after that. We decided that happiness is also a responsibility and something we all owe ourselves. There are plenty of super successful people that concentrate too much on their jobs and their success (in and outside of work). People tend to forget about happiness and joy. And that’s why Ying is trying to incorporate the two together as much as he can, especially inside the gym.

Ying wakes up and drives to LA Fitness at 4:30 in the morning. He grabs his iPhone in the parking lot and watches inspirational speakers on YouTube to get him ready to go for the day. They tell Ying to “F average!” and “Be a beast!” and he gets into the gym and has fun with it.

Ying signed up for the Chicago Marathon again for 2015. He’s approaching exercise with the same seriousness, but with a little more laughter this time around. He’s forgiving himself for getting too comfortable, because he knows nobody is perfect. But at the end of the day, he knows that it comes down to either doing it or not doing it.

“We’re all here with opportunities. When it comes down to it, you just have to do it. It doesn’t matter what ‘it’ is – whether it’s read a book or get up at 4:30 am to get to the gym. Everybody wants to run a marathon until it’s time to train. You just have to do it and have fun with it along the way.”

3 thoughts on “Fitness: an Ongoing Story with Ying Maneein”