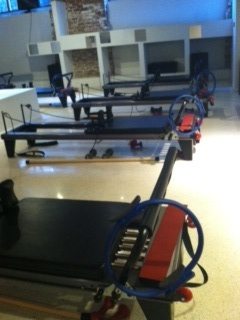 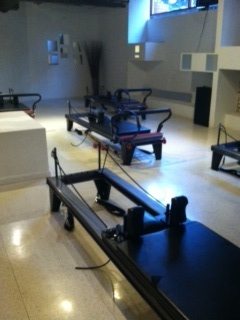 Class Focus: We focused on fluid movements that strengthened and toned. We also got our heart rates up throughout the class, really creating a well-rounded workout.

Cost per class: $26. If you’ve ever looked at Pilates sessions on a reformer anywhere else, this rate is a steal.

Who should take the class:

I have been meaning to take a Pilates reformer class for the past year or so, but haven’t found an approachable group class. Melissa, the instructor, gave me a great reformer walk-through. She explained the Allegro Pilates reformer and its props. For anyone else who hasn’t taken a reformer class, you can see the makeup of the reformer here (not the same brand, but it helps). We also used a box, which was the size of the carriage, a bar (for balance, not weight) and a Pilates ring.

We started out with a warm up that used the ring. With our backs on the carriage and out legs in tabletop, we put the ring between our knees and warmed up the core with crunches, knee-squeezes and some combos. Following that up with some more challenging planks, we used the movement of the carriage to take planks up a level. We moved knees in and out and followed that up with pikes. At this point I was sweating. I’m a sweaty human being to begin with, but I wasn’t anticipating as hard of a workout.

We  used the movement of the carriage to tone shoulders and arms starting with a superman-esque movement. We laid on our stomachs and, facing he back of the reformer, pulled ourselves in and out using the tracks. For arms, we laid on our backs and used the reformers straps: positioning arms out to the side with a slight bend, and pulling into the side of the body. I was super challenged by this series.

We moved right into something that reminded me of the big to-do on my fitness list: tone obliques. With the box on the carriage, we laid on one side and steadied our bodies with one leg bent, one foot on the foot rest and used obliques to move our bodies up and down. If you’re wondering what that looks like, it’s close to this.

One of my favorite toning moves of class worked the butt. With feet in the straps, laying on our sides, we went through a few moves to target different muscles within the seat. We started with bending the leg fully and extending fully, followed up by small bends and ending with a straight leg moving from shoulder to hip level. Melissa was nice enough to help me take a couple photos to show this move. 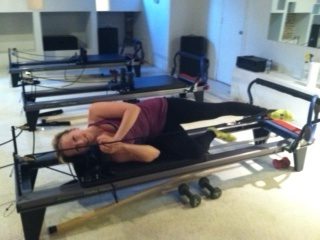 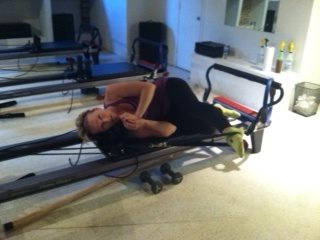 Because it’s Pilates and because I answered, “core” when asked if there’s anything I wanted to work on, we did another set of abs and finished up with lunges, which is where the bar comes in. We put one foot on the foot rest and the other on the carriage and pulsed the back knee down. It was an added challenge to the traditional lunge.

The verdict: I’m planning to go back. It felt like a great addition to my week!

2 thoughts on “Pilates at Reform Chicago”