This post was sponsored by Brooklyn Boulders. As always, we only write about products, brands, and experiences we love.

As soon as you step into a Brooklyn Boulders—whether it’s in Chicago, Somerville, or the Queensbridge—you’re struck by a couple of things. First, and most obviously, is the soaring ceilings and gallons of light streaming through the space. But the second thing you’ll notice comes once you’ve made your way past the front desk, climbing gear in hand, is all the different places people are hanging out throughout the space.

You’ll catch a glimpse of communal tables, where co-workers and digital nomads connect over the airy workspace. You’ll see the workout facilities, where aspiring climbers practice their grip strength and unwind with a group yoga space. And most of all, you’ll see the bouldering and lead-climbing areas filled with climbers of all shapes and backgrounds, cheering each other on as they challenge each other to reach one move higher.

Climbing as a workout and climbing as community are inseparable at Brooklyn Boulders. On and off the wall, Brooklyn Boulders members are forging bonds and coming together over not just climbing, but also running, LGBTQIA initiatives, co-working, and more.

Meet three members of Brooklyn Boulders, who found climbing in different ways, but use it for the same two higher purposes: connecting with others, and achieving their fitness goals.

As a a fitness writer and strength and conditioning specialist through the NSCA, Aleisha Fetters is no stranger to the strength needed to scale walls in both the literal and figurative sense. Fetters started climbing last fall as a way to challenge herself to face her fears and practice what she preaches about fitness as a means of empowerment.

“I signed up for a 101 class by myself and just did it!” she shares proudly. “From there, I started bouldering on my own, took a ropes class, went on a BKB Wild trip, and have now taken the level-up two-week course.”

Fetters found that climbing complemented her strength workouts while still forcing her to get out of her comfort zone.

“Climbing is so fun, rewarding, and just a great way for me to get out of my box and challenge my body in new ways,” she explains as she goes into more detail about how she accounts for her climbing as part of her regular workout routine.

“I try to get at least two climbing days in per week, and I always love it when I can bump that up a bit. Depending on how much climbing I want to do, I might count it as a ‘pulling’ day with my training, pair it with some running, or a bit of weight lifting.”

As a strength training devotee, Fetters was pleasantly surprised to realize that not only were her strength workouts improving her climbing, but the opposite was true, too.

“It was cool when, after four weeks off of deadlifting, I was able to pull a PR! My grip strength has always been a limiting factor for me in the gym, and that’s something climbing improves in a big way!”

Plus, she points out, climbing is a good way to incorporate “play” into her workout routine, which helps her from getting into a rut or feeling stagnant. And, she confesses, “it also just feels really badass when you are able to solve a new problem!”

Moreover, Fetters realized that the atmosphere of Brooklyn Boulders was something she couldn’t quite replicate at her regular big box gym.

“Since joining [Brooklyn Boulders], I’ve actually cancelled my membership at my regular gym. BKB is such a healthier place for me emotionally and mentally. Everyone from the staff to the other climbers are great, and you really feel like you’re part of the community from the get-go. Seriously, the second day I walked in the door, people were greeting me by my first name on sight!”

Feeling intimidated by the different routes and all the seemingly-expert climbers who race up the wall like it’s no big thing? Don’t be, advises Fetters; the climbing community is incredibly outgoing and welcoming to newcomers.

“Between attempts, people just sit and chat and give each other advice on how to figure out different problems. People end up working on problems together, and by the time they’ve solved it, they’ve also swapped phone numbers for future meet-ups and connected on Facebook.”

Jennifer Hanley, BKB Queensbridge: “I appreciate the all female climbing community because it is somehow easier to be myself, fail, or just try.”

Jennifer Hanley of Brooklyn Boulders Queensbridge made her climbing debut at The Gunks, a world-class climbing hangout, with a group of friends who came from all over to experience the challenge. Nearly five years later with a move to New York City under her belt, Jennifer heard about a climbing gym opening near her, and she took the coincidence as a sign to pick up bouldering. 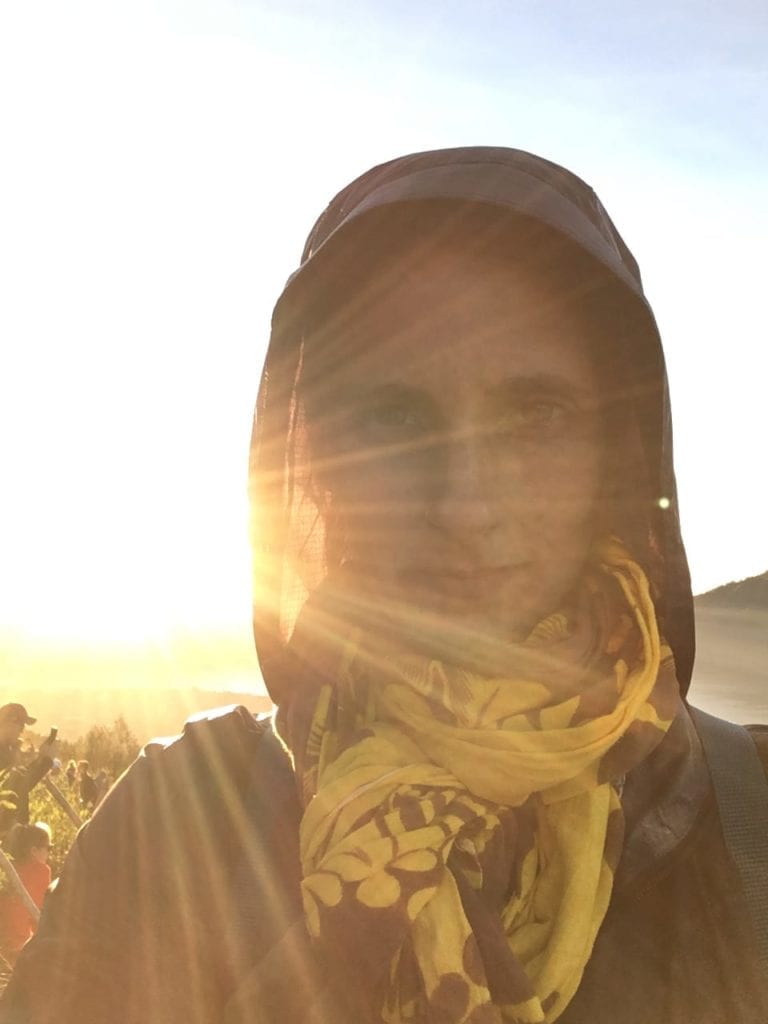 Soon, she found herself wanting a little more out of her climbing experience; namely, a little socializing and a little structure. After hearing about Climb Like a Girl (CLaG, a four-week, team-focused course helping women improve their climbing technique in a supportive environment), Jennifer realized that might just be her solution. 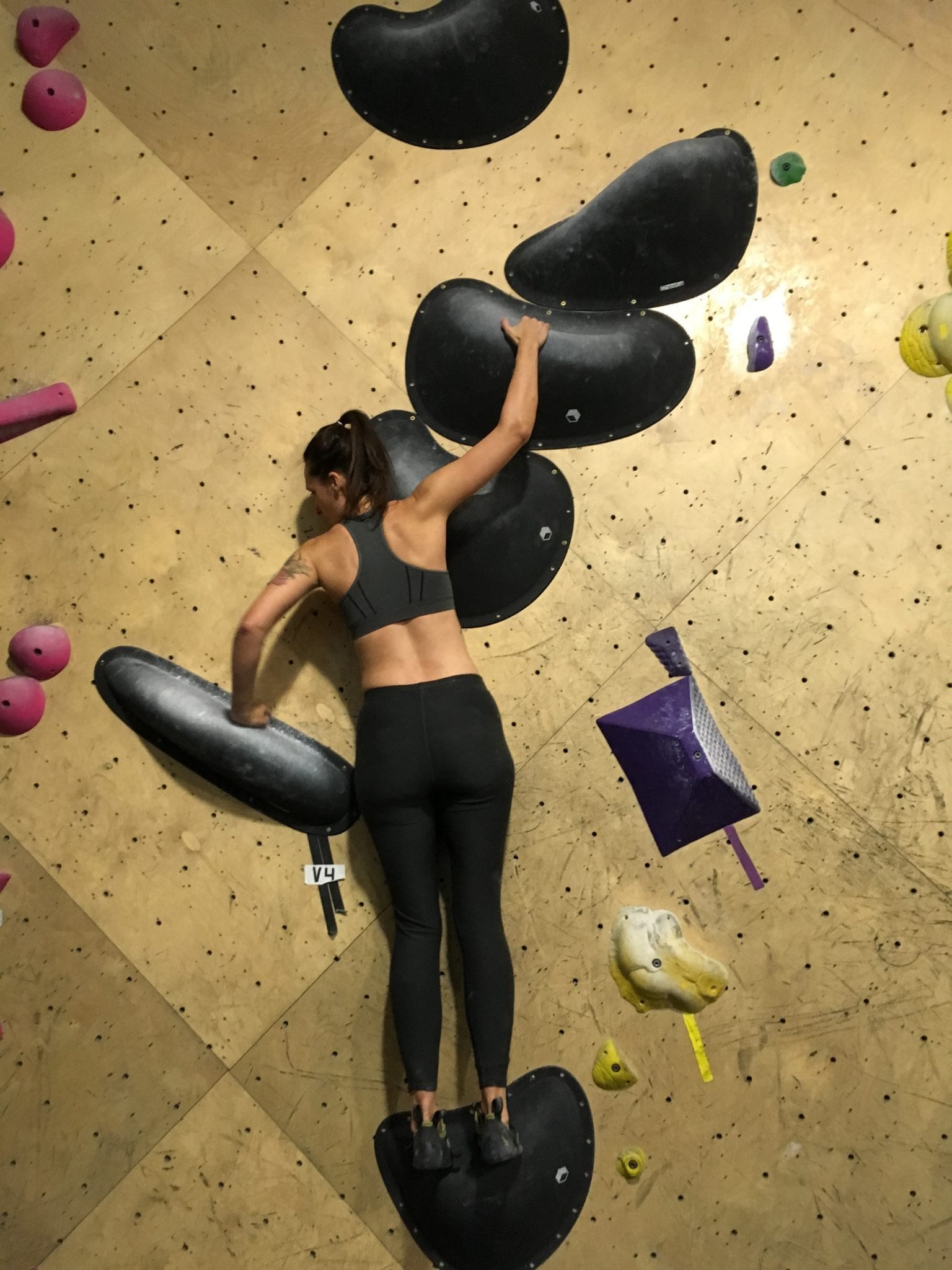 “I loved my little cohort as well as our fearless leaders Emily and Tess,” Jennifer remembers. “I learned a lot, got stronger, made climbing friends, and have some more confidence on climbs I was always nervous to try,” calling out The Cave, specifically.

While Jennifer’s consistent climbing partners are mostly male, she gets something a little different out of her CLaG partners.

“I appreciate the all female climbing community because it is somehow easier to be myself, fail, or just try,” Jennifer explains. “[My male climbing partners] are as supportive and engaging as my new CLaG partners but, for me, there is something about the sisterhood that is comforting… I think it make have something to do with competition. Competition with the self is brutal enough; it is nice to feel just support. With ‘the boys’ there is always a little (healthy!) competition to make the send.”

But climbing with her girl gang isn’t the only way Jennifer engages with the BKB community; she also leads the gym’s track and field crew, an opportunity she helped create after noticing a lot of fellow climbers wore race shirts. As a high school cross country and track coach, Jennifer had workouts ready to go and took on the new leadership role. And now, what started as a run club has expanded to Track and Field Club to better serve the obstacle course racers in the climbing community.

While Jennifer finds running more of a meditative, solo act, “climbing is my social funtimes. I love climbing with people and meeting people through climbing. Truth be told, climbing replaced the athletic social void that was left when I retired from roller derby six years ago.”

As she trains for a half marathon, Jennifer finds that the more mileage she does, the more she needs the balance of the climbing gym—both socially and athletically.

“I will be craving friend time after solo long runs; plus, there are yoga classes offered at BKB to help me keep my hamstrings and quads loose, and rock climbing helps me with my core strength.”

“I do think running and climbing are very complementary athletically,” Jennifer reasons. “As a runner I often ignore my core and upper body, but climbing makes me focus on those areas. Both sports benefit from strong entire bodies. Leg day on the track will help me with that awkward squat start I need on the wall. Both make you concentrate, but climbing makes me have a laser focus and a forced calm when I am working through a challenging part of a problem.”

Plus, there’s no one better than the BKB community when it comes to showing up for their members on race day AND on the wall. Members will make a point of signing up for the same local races, sharing training tips and crafting cheering posters as race day approaches.

“As we grow and train we can help support one another be the best overall athletes we can be- including when climbing on the wall. Isn’t that what this is all about?” says Jennifer.

This past fall, Jennifer made her return to The Gunks, ready to conquer some outdoor boulders.

“It was a beautiful fall day,” she remembers. “To warm up, I went on a sun dappled trail run. Returning we made some friends working on Boxcar and climbed together well into the evening. It was one of those picture perfect days where all I can think is how grateful I am to live this life.”

Alice Zhang, BKB Somerville: “The positive climbing vibe and a bunch of friendly faces has really helped encourage people to keep coming back.”

The concept of a rock climbing gym as a community and a place to make friends was exactly what made Alice Zhang impulse-buy a pass to her neighborhood climbing gym. Pretty quickly, she fell in love. 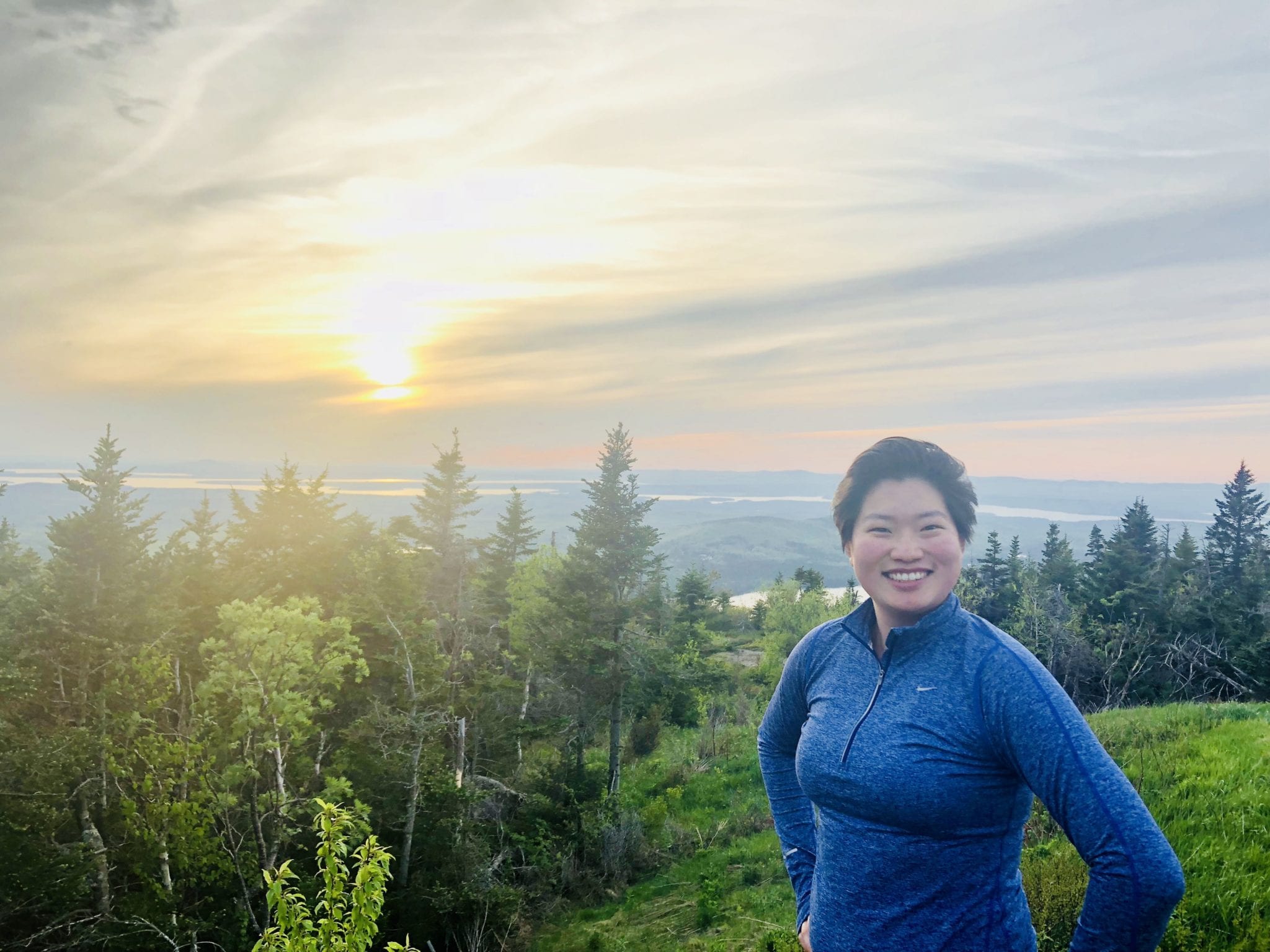 “Climbing was, at first, only a way to make friends my age, but it was also the first and only sport where I felt like being inactive, overweight, and a woman wasn’t a huge hurdle like it would’ve been with other sports,” Alice explains. “That realization, along with how fun and exhilarating it was to climb to the top of the wall and how supportive members at the gym were, really were the biggest reasons why I kept going back.”

Now, Alice recognizes that climbing helped open doors to other physical activities. She now tackles HIIT classes, strength training, and obstacle races confidently—but climbing has grown and grown in its importance to her life.

“Climbing has basically become one of the most important things in my life now,” Alice describes. “I try to wake up early to go to the gym, or I move my hours so I can leave work to go climb when it’s not crowded at the gym. I maximize the amount of sleep I get now because I like it and because it helps me recover and prep for the next gym session. This is all stuff I never did or thought about before, but I honestly love it. It’s given me order and discipline in my schedule and something super fun to look forward to almost every other day.”

Plus, Alice has found that close-knit community she was originally seeking, through being a leader for the Queer Inclusive Climbing Klub (QuICK) that climbs regularly at Brooklyn Boulders. With welcoming leaders and an outgoing group of climbers, QuICK has grown its participation and helped reinforce the idea that anyone and everyone is welcome at Brooklyn Boulders (and in the rock climbing community at large).

“People new to climbing or interested in a queer community come to QuICK not really knowing what to expect, and I think having the positive climbing vibe and a bunch of friendly faces has really helped encourage people to keep coming back,” Alice says. “Even now, about half of the new people I see say that they’ve come to check out climbing because of the high visibility QuICK has at BKB, and that’s been pretty monumental in reaching out to people in the community.”

At aSweatLife, we do our #Sweatworking event series for two reasons: to try new things, and meet new people. If you’re ready to do both, you book your first visit to Brooklyn Boulders right here. Already got a climbing buddy in mind? Take advantage of this offer: you’ll get two-for-one entries for Intro to Climbing and/or Learn the Ropes until March 10!