I Half-Assed My Race, But I’m Owning It (and 3 Other Things I Learned at my First Triathlon)

I recently competed in the Chicago Triathlon SuperSprint. Super Sprint, meaning the swim was just .23 miles, the bike was 6.2 miles and the run was 1.5 miles.

Oh, and I rode a Divvy, which added to the race’s appeal and accessibility for this average athlete. 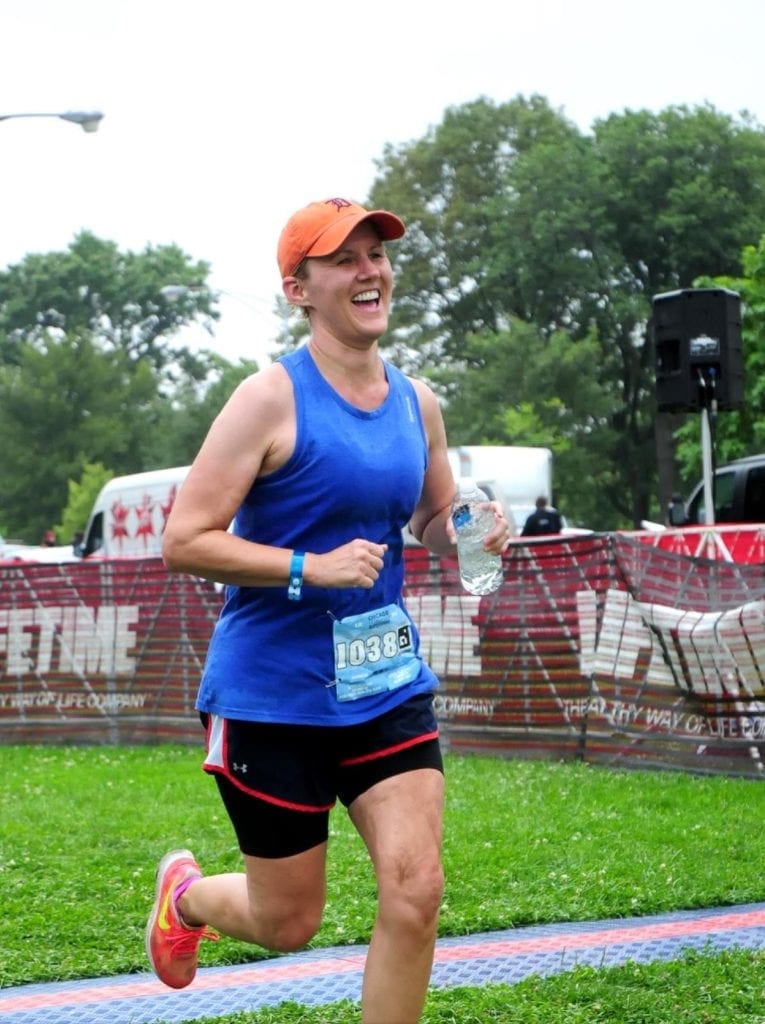 It sounded easy enough, but I hadn’t ridden a bike or swam in decades. I also hadn’t run in months. I intended to train for the SuperSprint, but my workout plan wasn’t the most aggressive: I took a few swim lessons, biked a handful of times and went on a couple of runs.

I finished the race without injury or overwhelming struggle (mostly because the water was shallow enough for me to stand and walk when I flailed), but it wasn’t exactly my finest athletic achievement. It did, however, lead me to a few realizations.

Sometimes, it is better with friends

While I have no problem doing things on my own, navigating the crowd at Foster Beach trying to figure out where to go and what to do felt lonely. I envied the groups of friends and couples I passed who I assumed were sharing their nerves and supporting each other.

In a rare I-immediately-got-what-I-wished-for moment, a friendly millennial and fellow Divvyer approached me as we were herded into the transition area. Our ensuing chat revealed she was just as anxious and inexperienced a swimmer as I was. So, we buddied up.

Our bond only lasted the duration of the triathlon, but because of Jessica I went from feeling like the only unprepared lonely athlete there to having someone to stress, commiserate and laugh with. It’s my most meaningful memory of the day.

Physical fear is becoming an afterthought

The morning of my long ago first trapeze class, I sat in my car feeling nauseous debating if I should turn around and go home. The night before my first and only half marathon I barely slept. But the week leading up to my triathlon? I almost forgot about it. The night before? I fell asleep like it was any other Friday. The morning of? I got up, dressed and out the door like I was heading to work or meeting a friend.

I am racked with self-doubt in most areas of my life, but it seems after trying so many new activities over the years, my physicality is no longer one of them. I might not be great at the challenge in front of me, but I’m confident I will be good enough to survive it. Standing on the beach with Jessica, waiting for our turn to enter the water with nary a stomach flutter, I marveled at how much easier it has become for me to show up—for adventure sports anyway.

Pondering my lackluster performance as I walked home from the race, I wondered why I didn’t train harder. The answer was because I half-assed that triathlon like I half-ass most other things in my life.

As my dance therapy experience reinforced, I don’t have the patience for minutiae. So, I quit things that I don’t grasp quickly like a new language or studying for NASM Certification. Other times, I let self-doubt and feelings of inadequacy cave in on me until I’m paralyzed by inaction, like when I’m job hunting—I feel every position is above my skill level and I’d screw it up so colossally I’d never get over the shame so I don’t bother applying or I cancel the interview. (Dramatic, I know.) Or, I think whatever I’m trying to do (like swim .25 miles without touching bottom) doesn’t matter in the grand scheme of things, so why not just stay home and binge TV instead of battling the elements, the CTA or other people?

To avoid grappling with all that emotional distress, I usually choose the easy route of trying something once or twice to say I did it and then never return. It also explains why I have stuck with safe, stress free, under the radar choices, like continuing to wait tables at almost 50-years-old.

I’ve learned to own failure

I received many congratulations after finishing the tri. Though I appreciated the sentiment, it felt wrong. I tried to explain that it wasn’t as big of an accomplishment as it seemed, considering it was super condensed and again… I walked during the swim leg. But no one wanted to hear that. And I get it. We are conditioned to make people feel better and be their cheerleader when they doubt themselves. I do it too, but I was too lazy to truly train for the triathlon, and I know that.

Sometimes it’s okay to be like, “I totally failed” and then laugh or cry about it. In this case I laughed, but either way, it’s not the end of the world.

Or maybe it is and that thinking is how I have ended up half-assing things so often.

To change that trajectory, I know I need to attend every class I sign up for even when I don’t feel like going; stick things out with, say, a training group even when people annoy me; and pursue new professional opportunities even when insecurity cripples me.

It sounds good in theory. We’ll see how it pans out in practice.