What to Expect from Your First Megaformer Class

The Megaformer enjoyed some major time in the spotlight earlier in 2018 when Meghan Markle said it was her favorite workout. It’s not surprising that the newest member of the Royal Family loves taking Megaformer classes—it’s a full body workout that strengthens and tones the body in a major way (expect a smaller waist, harder abs, stronger legs, a perkier butt, and increased endurance during cardio workouts and everyday activities if you take megaformer classes regularly). But if you’ve never used a Megaformer before, it can certainly be intimidating. That’s why we talked to top instructors to explain everything you need to know for your first class.

Get there early to familiarize yourself with the machine and the studio.

“The earlier you can get there the better,” says says Glenn Snellgrose, instructor at Chi50 in Chicago. “You’re now allowing the instructor more time to go over the machine with you, and you’re also going to be able to get aware of the space.” 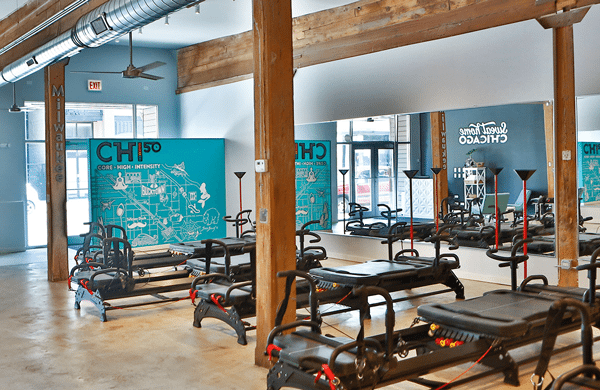 Because the Megaformer is a 360 machine (meaning you can work on the front, back, and sides of it), explains Snellgrose, every studio is set up differently, so it helps to acquaint yourself with the classroom and the machine before your first class. (A class typically runs 45-50 minutes depending on the studio.)

The Megaformer has three components: a carriage that moves, two platforms, and springs for resistance, says Laurie Benenati, instructor and owner of Lagree NY in Astoria, Queens. Yellow springs are lighter, while red are heavier (five yellow springs equals the resistance of one red spring), says Snellgrose.

Bring grippy socks with you.

Some studios require you to wear grippy socks while you’re on the megaformer. Benenati says this is for safety and sanitary purposes. Adds Snellgrose, “If you have sweaty feet, that’s going to be the first thing that slips.” (That being said, you will be given wipes to clean down your machine at the end of the class.)

Pick a spot in the middle of the room.

For your first class, the ideal spot is the middle of the room, says Snellgrose — that way you can take cues from the students next to you if you’re unsure how to do a move. Regardless of where you snag a spot, your instructor will guide you the entire way. Most Megaformer classes are capped at 12 students max (both Snellgrose’s and Benenati’s studios have 10 machines per class), so your instructor will always be in your general vicinity to ensure you’re using proper form in each exercise.

Be prepared to work every part of your body.

Sebastian Lagree invented the Megaformer machine as well as the workout taught on it (known as the Lagree method), and he intended it to be a full body workout. The machine is always evolving, says Benenati, who teaches on the latest model, the M3K+, at her studio.

“Sebastian Lagree used to be a big bodybuilder, but then he got hurt,” says Benenati. “So he started off with Pilates, but then he spent time doing cardio, and then he would spend time doing strength training — and he was wasting all this time working out. He wanted to invent a machine that would combine everything.”

The workout is high intensity but low impact — meaning your heart rate will definitely spike, and it’s a great pick for anyone who has knee or hip pain and can’t take a ton of impact on their joints, says Benenati. Each class is broken down by muscle group, so expect a section of exercises that focuses on your legs, obliques, and arms, as well as core work woven throughout the class, says Snellgrose.

Perform each exercise as slowly as you can.

Some of the moves you can expect to perform on a Megaformer include lunges, squats, plank to pikes, side crunches, and bicep curls. While you might be familiar with these exercises, on a megaformer, the key is to go as slow as you possibly can. This fires up what are known as your slow twitch muscle fibers (aka your fat burning muscles), says Benenati. “When you’re going slow and slowly pulling against the tension and fighting for balance, your body keeps your muscles activated the whole time,” says Snellgrose.

If you’re taking a Lagree method class on a Megaformer machine, each exercise will have a unique name, like mega donkey kick, escalator lunge, or mermaid. Benenati says it usually takes about three classes for you to recognize the moves, so don’t get discouraged if you feel overwhelmed during your first class.

And if an exercise feels too intense, Snellgrose and Benenati both encourage you to take a break then come back to the workout when you’re ready. Don’t be afraid to flag your instructor, either, as they can offer modifications to any move.

Although you’ll become more comfortable on the Megaformer machine after a number of classes, working out on a Megaformer will never be easy.

“I always tell people, ‘The pace of the class gets easier, the threshold for pain gets higher, but the execution never gets easier,’” says Snellgrose. As you become more familiar with the workout (which experts say you should do 2-4 times a week for best results), you’ll understand how to hold your body correctly and isolate and work your muscles, so you may even feel like a class is harder once you’re three months in, says Snellgrose. Plus, if your instructor thinks you need to dial up the intensity, they can offer modifications to make exercises even more challenging for you so you never plateau.