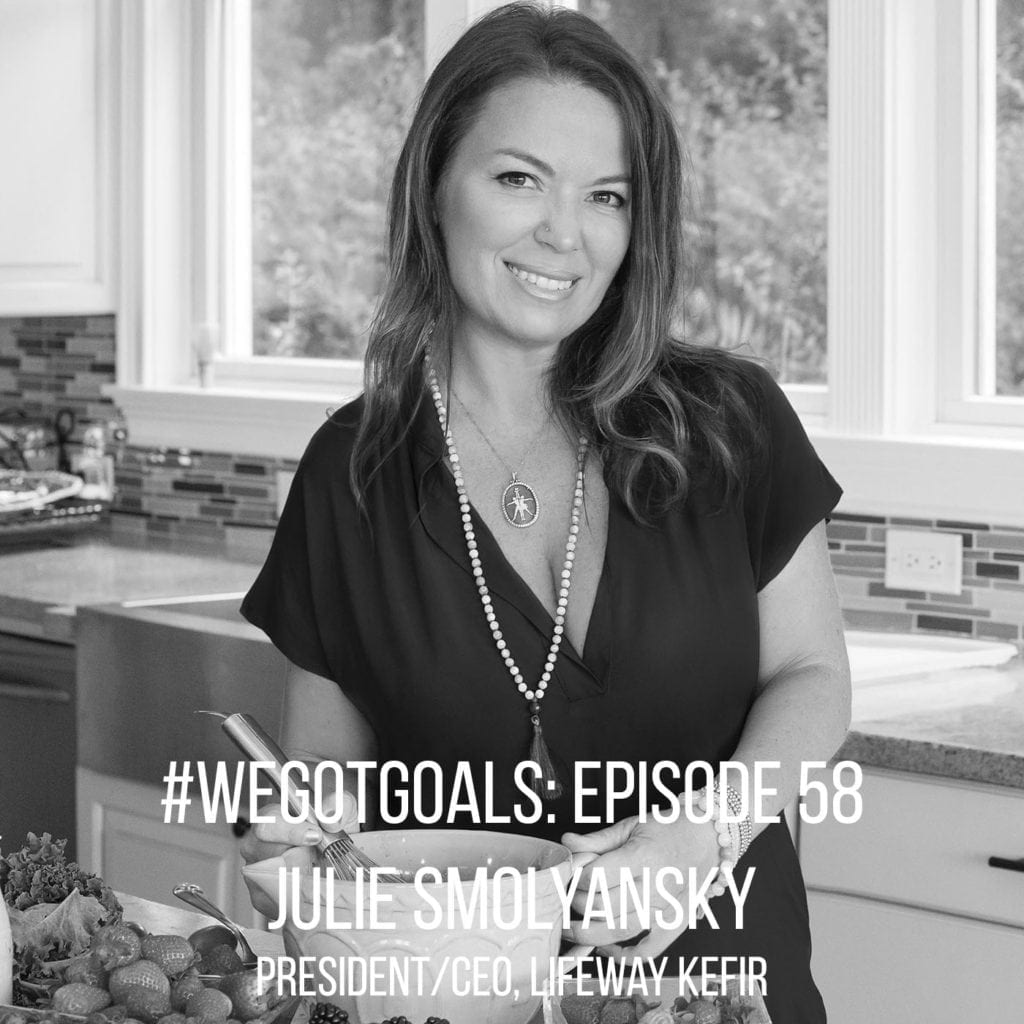 Julie Smolyanksy is a tough woman to nail down.

Not in terms of her schedule — although she is all over the place, having recently published her first book, The Kefir Cookbook, while running Lifeway Foods full-time as CEO and President.

Instead, over the course of our conversation on the #WeGotGoals podcast, I found myself trying — and repeatedly failing — to put Smolyanksy neatly in a box that made it easy to crank out a 500 words article.

Smolyanksy is a CEO/President, sure. But she’s also been the first female CEO of a publicly held firm (when she took over Lifeway Foods in 2002 after her father’s unexpected death). She’s a mother and a feminist activist, identities that drive her decisions as a businesswoman who wants to set a strong example for her daughters. She’s an immigrant who came to the United States as an infant with her parents, who brought kefir with them as a taste of Eastern Europe and later turned it into a $12 million business (up to $120 million in 2017). She’s sharp as a tack and incredibly organized and detail-oriented, but she’s a believer in holistic health and says things like “the universe is going to give me what I need” without a hint of irony.

Needless to say, my head was spinning as we sat down to talk, knowing there were so many dimensions to this woman. But interestingly, one of the things we talked about was the benefit of ignoring your brain and listening to your gut, something Smolyansky got a crash course in when she lost her phone in Mexico for a few days.

“It was like sort of the universe doing a wake up call like ‘Julie, stop, stop, slow down, stop, listen to yourself, listen to your body, you’re spinning out of control,'” Smolyanksy revealed.

Without her phone to distract her outwardly, Smolyanksy spent her days doing yoga, meditating, and journaling, only to find that hip pain she had dealt with since pregnancy had mysteriously disappeared after a particularly cathartic meditation.

“I think that was this moment of following my intuition,” mused Smolyanksy, noting how after that realization, she was able to look back in her life at times she had ignored her gut instincts only to regret it later.

Today, Smolyanksy hones her intuition through regular SoulCycle classes, running, enjoying the occasional glass of red wine — and of course, incorporating kefir into her diet regularly.

Listen to Smolyanksy’s episode of #WeGotGoals to learn more about taking over the family business during a tumultuous, grief-filled time, plus how she feels her identity as a feminist impacts her daughters and what it’s like to be the only young, immigrant female CEO in a room full of old, white males. To get more of #WeGotGoals, make sure you subscribe and leave a rating or a review on Apple Podcasts or wherever you get your podcasts so others can hear these stories, too.

Psst… don’t stop listening when the interview portion is over. We saved a few minutes at the end of the podcast to devote to real-life goal-getters like you, and we’ll hear from one inspiring goal-getter each week.