The Amazingly Doable Art of AcroYoga

“Should we be concerned that our instructor has a broken arm?” Those were the first thoughts that went through my head as I showed up at YogaSix for an AcroYoga workshop. No, not aerial yoga (which is what all my friends thought I was doing). AcroYoga. As in, acrobatics. As in, I was apparently going to do handstands on people’s backs.

I do a little yoga here and there. And I once spent a joyful week in circus camp convincing myself that trapeze was a viable career (a story for another day). But I’m no gymnast – heck, I can barely do a cartwheel. So just what had I gotten myself into?

Very simply, AcroYoga is a partner practice that relies heavily on trust and communication. Acro yogis create beautiful and striking poses that may leave you wondering, “Wait, how did they do that?” Of course, it’s also an incredible full-body workout. Seriously, I was feeling it the next day in muscles that clearly hadn’t been used in quite some time.

But back to that broken arm. Dan Plehal, our instructor, picked up on the fear in everyone’s eyes. “I didn’t break my arm doing AcroYoga,” he assured us. We were skeptical. Few of us in the class had tried AcroYoga before, and there were several men in attendance who had been dragged there by their significant others. One guy was wearing a t-shirt with a grimacing cartoon bear above the not-so-subtle phrase “Grin and bear it.”

My husband and I were simultaneously nervous and excited. We may have attempted to do an AcroYoga pose in our living room after we signed up for the two-hour workshop. We may have come close to crashing into the tv. So today was an opportunity to learn real techniques.

First things first: Safety. Amateurs should not attempt to do AcroYoga at home. Dan and his co-instructor, Kimber, explained that AcroYoga actually requires three people, not two, as is commonly assumed. The three roles are base, flyer and spotter, and they’re fairly self-explanatory; the base is the foundation holding up the flyer (the person in the air), while the spotter helps keep everyone aligned, adjusts legs and arms as needed, and, most critically, catches the flyer if she or he falls. Spotters are super-important!

After some warm-up yoga and a quick ice-breaker activity, we divided into groups of four. Dan and Kimber demonstrated the first pose, called “bird,” which reminded me of “flying” my younger cousins through the air on my knees. Perhaps not surprisingly, I look like a happy little kid here: 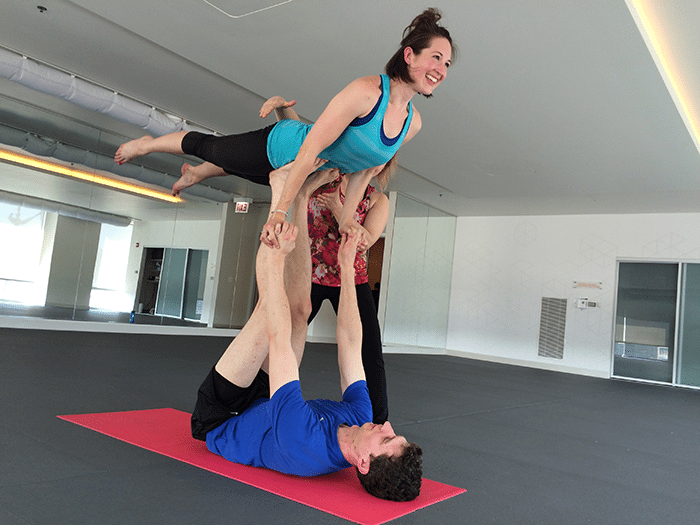 There’s no photographic proof, unfortunately, but I succeeded in reaching my arms out behind me one time, so it really looked and felt like I was flying. For this first pose, we learned the importance of hand grip. Rather than intertwining your fingers, it’s more effective to use a modified handshake hold.

Speaking of holding hands, squeezing your partner’s hand is a good way to communicate. Saying (or maybe shouting) “down!” is also a great way to communicate, as I discovered when my husband’s feet were digging into my hip bones in a most uncomfortable manner. Regardless of how you choose to express your needs, it’s a major part of AcroYoga.

So is trust. You are relying on your partner(s) for your safety. You’re also getting up close and personal with someone else’s body. Now is not the time to be self-conscious about some belly flab or how your butt looks up in the air. You will be sweaty. You may even drip sweat onto your partner’s face. But you’re in this together, so laugh it off and remember, this is a judgment-free zone.

After bird, we moved on to the dreaded handstand on the back. And of course, that one ended up being my favorite pose! Even though I haven’t succeeded in achieving a headstand in regular yoga, I can now say I’ve done the AcroYoga version, which is awesome. Counterintuitively, you reach both arms under (rather than around or across) the base’s chest and lean way far over the other side of him or her. Then with a little hop or two, you jump up into a tuck. 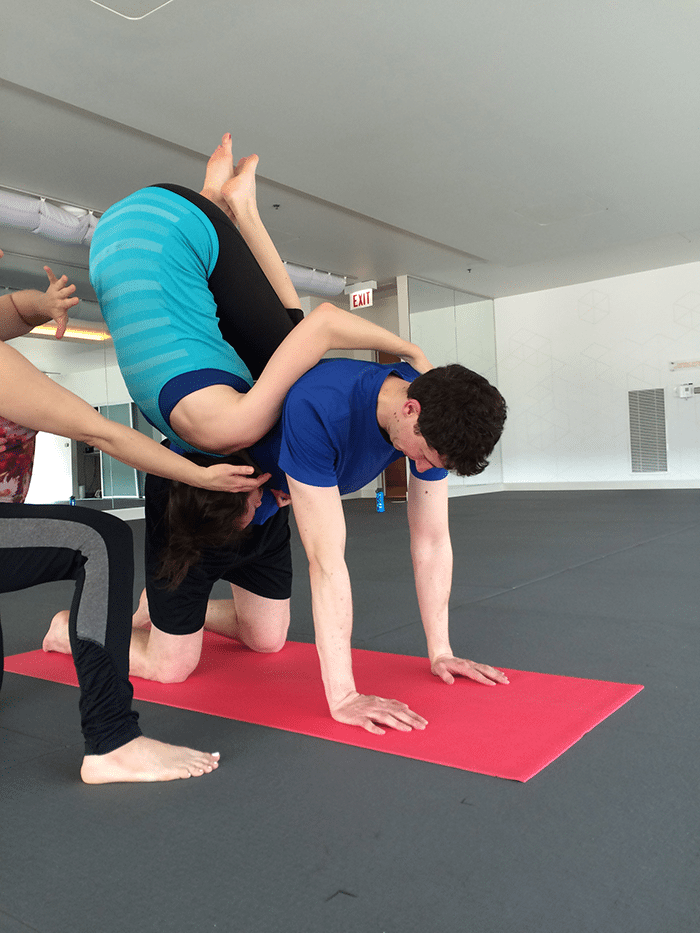 Then you slowly extend your legs out. 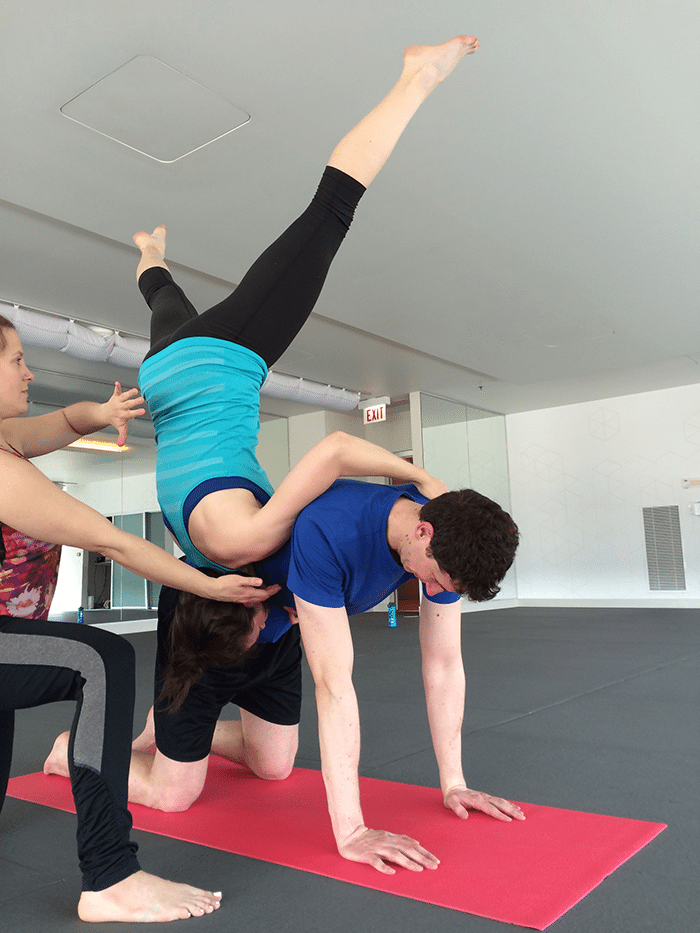 And you can also extend them straight up. 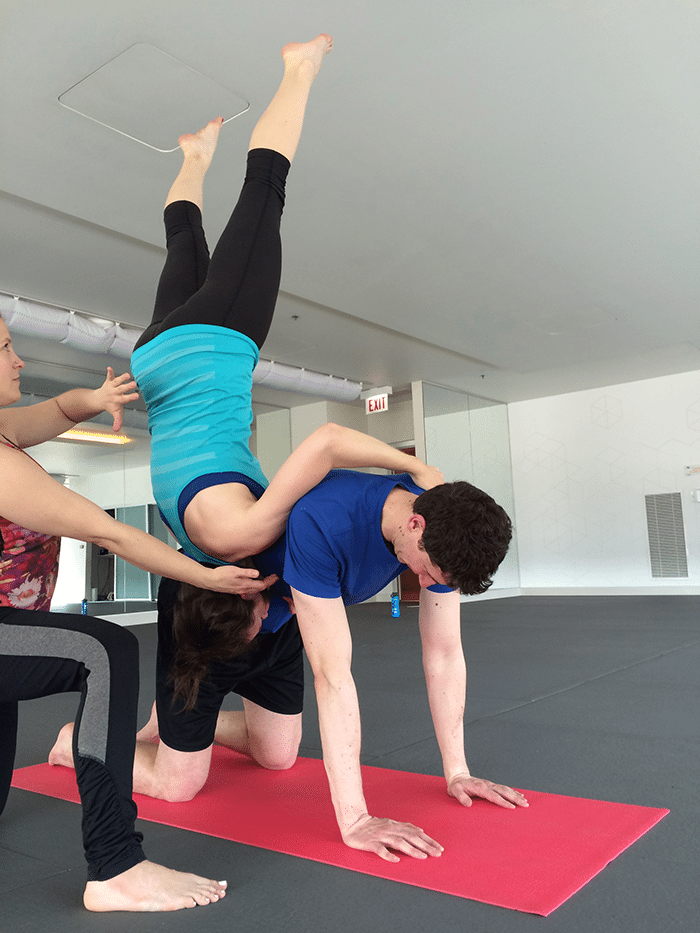 Again, I don’t have photos, but my husband and I also reversed the roles. Yes, my 6-foot, 4-inch husband did a handstand on my back. For the record, he’s way better at handstands than I am. 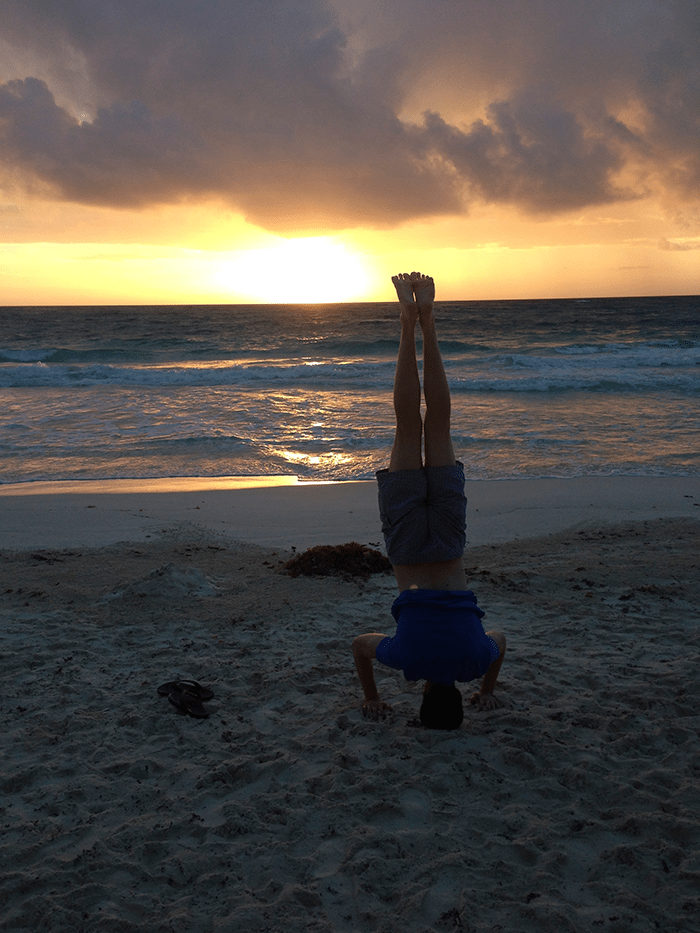 One of the most delightful parts of the workshop was discovering that anyone can be a base, flyer or spotter. Remember ole grizzly bear, the guy wearing the “grin and bear it” shirt who’d never done yoga before? Turns out he loved being a flyer. I mean, who wouldn’t love it? Here’s Dan flying with Paula Bui as the base. 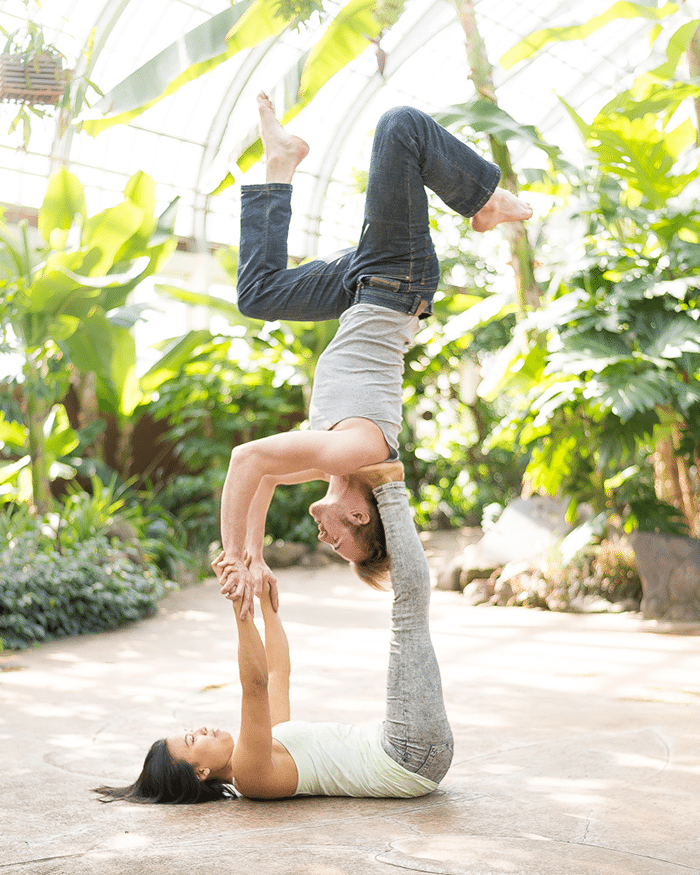 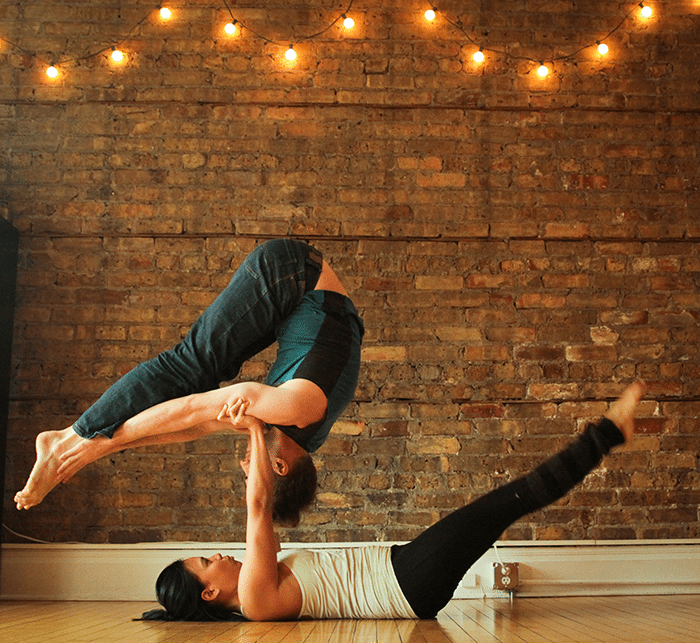 Okay, but then Dan and Kimber showed us the next pose to attempt. 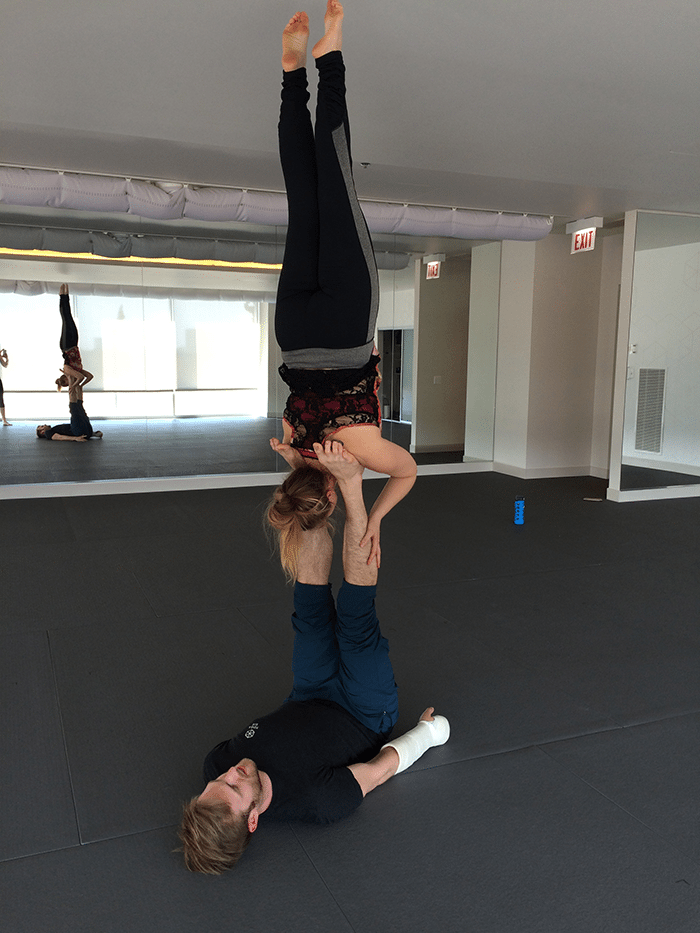 Well, we gave it a shot, but things weren’t quite as successful for us this time. I need to work on my ups – I couldn’t launch myself into the tuck position like I’d been able to do before. But hey, this gives me something to aspire to. Just look at this magnificence: 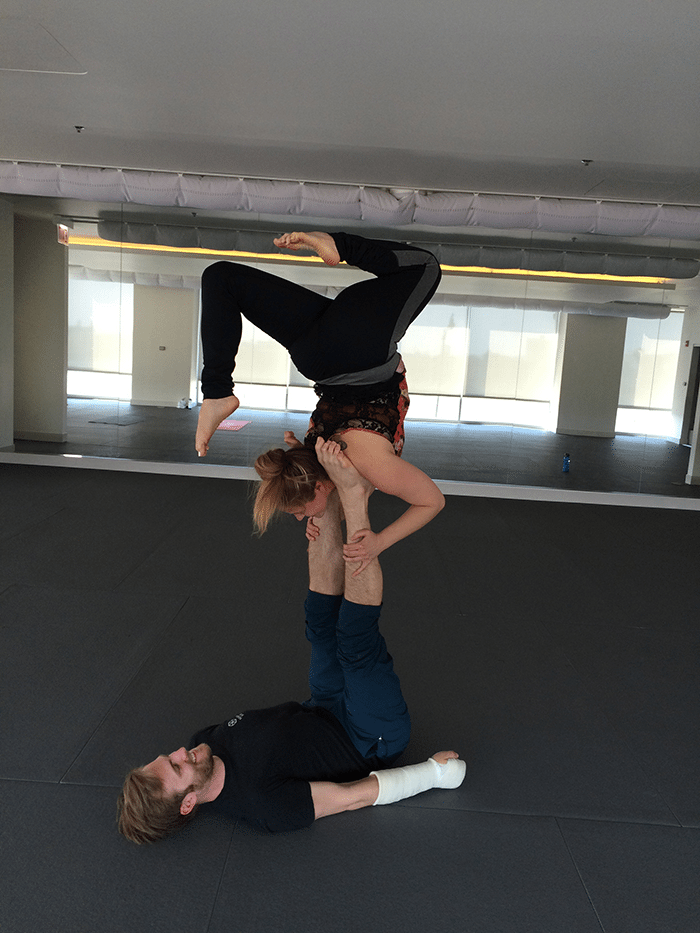 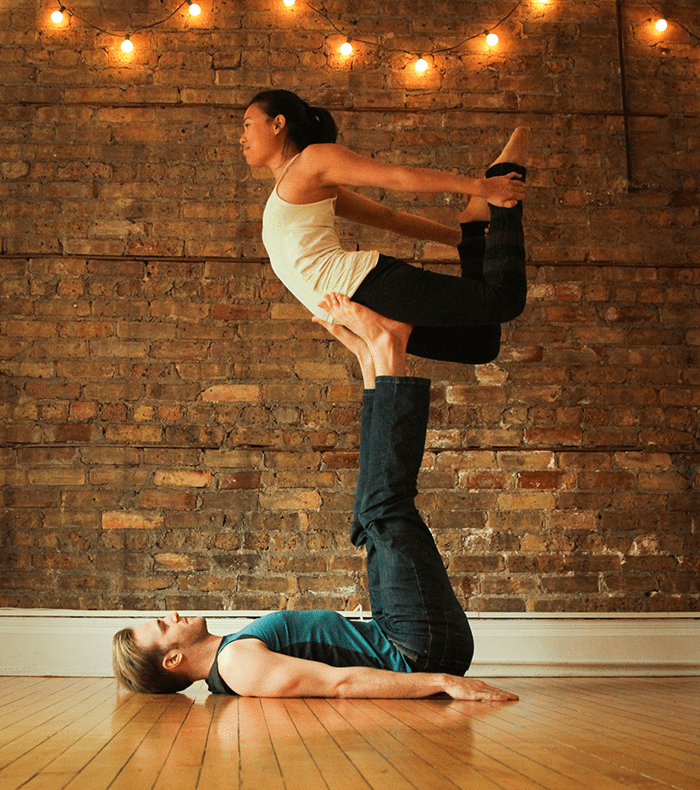 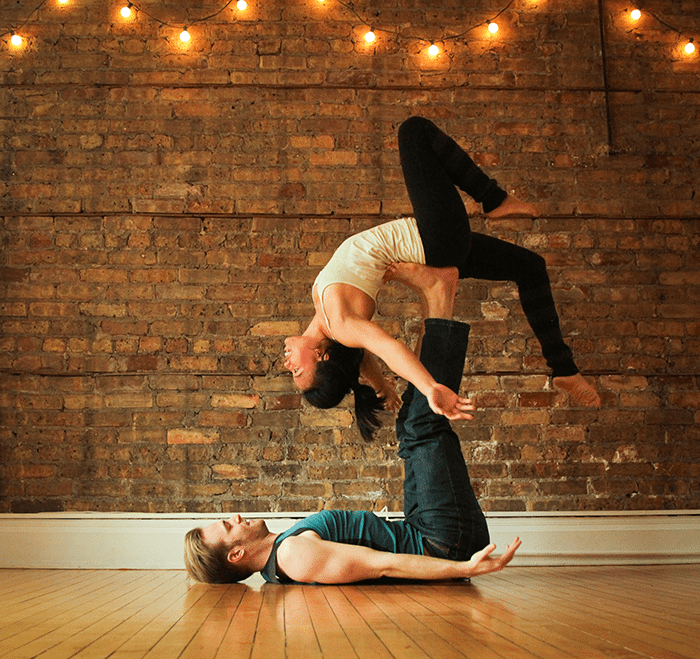 I never thought I’d be able to contort my body into some of these shapes, much less support my husband’s entire bodyweight in the high flying whale pose (see Dan and Paula’s demonstration below), but I did, and it was awesome. By the end of the workshop, all 10 of my fellow AcroYogis were walking a little taller and smiling a little wider. And no one broke an arm. 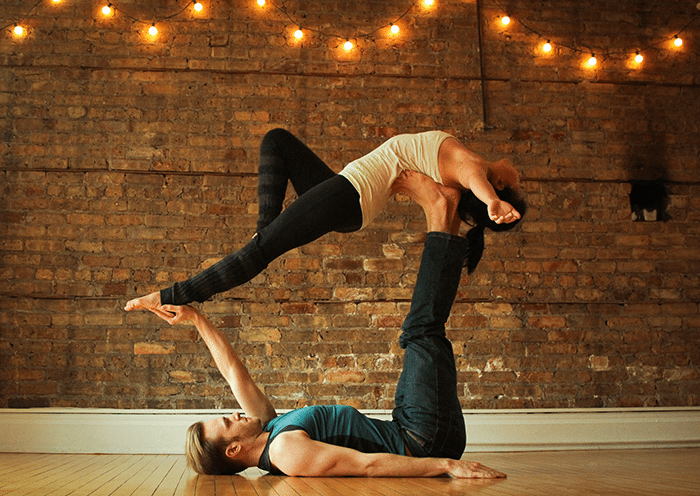 Ready to try AcroYoga? Check out the Chicago AcroYoga Festival coming up on Sunday, June 5, at Moonlight Studios. And if you meet Dan there, tell him I say hello!

Have you tried AcroYoga? What did you think? Let us know in the comment section below!

3 thoughts on “The Amazingly Doable Art of AcroYoga”