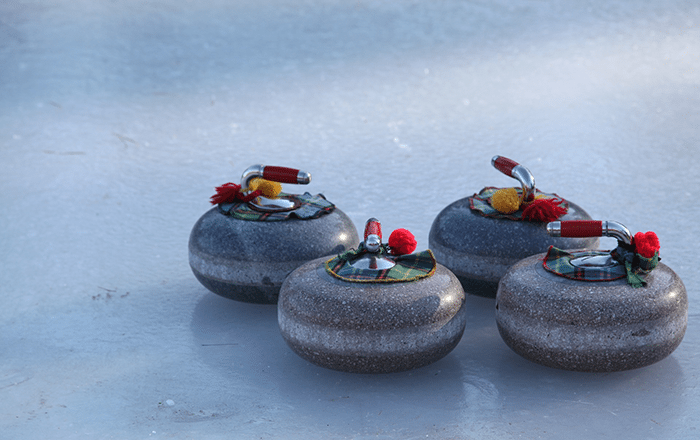 My husband Matt spent the last week of February hanging out with a bunch of yelling Canadian women. Sure, I was a little jealous—but I only have myself to blame.

Every evening, he stayed glued to ESPN3 for the 2016 Scottie’s Tournament of Hearts, a competition between the best female curlers in Canada. I’d describe curling — which you may have seen as part of the Winter Olympics —a s basically a giant shuffleboard tournament on ice. Two teams of four glide — or “throw” — eight large, granite rocks across lanes of ice called “sheets.”

The goal? Land them as close as possible to the “house,” three rings at the other end. This means throwing them at just the right speed and with the precisely adequate amount of spin, or “curl.” And the yelling isn’t just for show or an expression of frustration — it plays a key role in guiding the stones to their target.

Why do I take responsibility for his obsession? Well, I’m the one who (thanks to an invite from another writer friend) signed us up for an introductory curling session earlier that month. On a sunny Saturday afternoon uncharacteristically warm for February, we headed to the historic Chicago Curling Club — founded in 1948 and technically located in Northbrook — to see what it was like to play the sport for ourselves.

First, we gathered in the lodge-like club space for a welcome speech and a warm-up (jumping jacks and a few other dynamic moves, done to the groove of “Blurred Lines” — which seemed a bit mismatched to the wood-paneled, basement-like backdrop). Then, we hit the sheets, so to speak.

As you may have picked up already, curling has a unique lingo. Understand a few key words, and you’ll have a good idea of what we learned in about two hours of instruction (hat-tip to Chicago Curling Club vice-president and expert masters curler Stephanie Martin for instructing our foursome). So, here’s your mini-glossary of this Scottish-born, Canadian-adopted sport.

Sliders: Pieces of Teflon you affix to the bottom of one shoe, allowing you to glide effortlessly across the ice as you throw the stone. When you stand up and attempt to walk across the ice wearing one, however, you look more like someone who’s just gone back to Hardpressed after a yearlong break — shuffly, stiff and requiring outside support to stay upright.

Hacks: Rubber blocks sticking out of the ice, from which you push off to throw the stone. They look just like sprinter’s blocks, but instead of bursting out of them at top speed, you propel forward in a controlled, aligned lunge. As we quickly learned, this requires hip flexibility, core strength, and a bit of fearlessness—though if you need a little support, you can lean on a stabilizer made of PVC pipe to keep you from wiping out (we felt no shame in doing this — even some elite curlers do).

Sweeping: This has got to be the craziest thing about curling — what other Olympic sport involves household cleaning implements? Each curler has a broom, and when one teammate throws, two others take a position further down the ice. Sweeping quickly in front of the moving stone polishes the ice, slightly changing the stone’s direction or speeding it up. In fact, expert broom-wielding can propel a weak throw an additional 15 feet, we learned. We also learned you need a little bit of power and endurance in your upper-arm muscles to sweep well, along with the ability to shift your gaze quickly between the ice underneath you and in front of you so you don’t wind up face-planting right into it.

Skip: Sorta like the team captain, this person spends most of the time her team is throwing in the house, strategically planning the shots for the best chance of scoring. As in shuffleboard or bocce, only one team scores per round — so sometimes, you have to play defense. For instance, the skip might call a “hit” to bump the other team’s rocks out of scoring position, or set up a “guard” rock to protect the house. She’ll tell her teammates where to aim with a point of her broom. And she’s also the one doing most of the yelling — that’s how she tells the sweepers when to polish and when to hold off.

Broomstacking: At the end of our lesson, we played a mini-game in which each team threw eight rocks each direction, which was tiring enough. A real-life game usually involves eight to 10 ends (like innings — back and forth across the ice once) and can last almost three hours. That much throwing makes you pretty thirsty! Fortunately, there’s an official round of post-game refreshments. The name broomstacking hails back to the very first curling games in the frigid Scottish countryside; players had to pile up their brooms in front of the fire afterward to melt the ice off and figured they might as well warm themselves up, too. In what I can only assume is an uber-friendly Canadian twist on tradition, the losing team first buys the winning team a beer, then vice versa.

Since the Tournaments of Hearts has ended, my apartment is no longer filled with the yells of skips from the north. But Matt loved the experience so much he signed up for the club, which means he can go whenever he likes to practice and sometimes subs in curling leagues. So curling will still be a part of my life for a while — at least until the ice melts this spring.