What to Expect From Your First Pilates Reformer Class 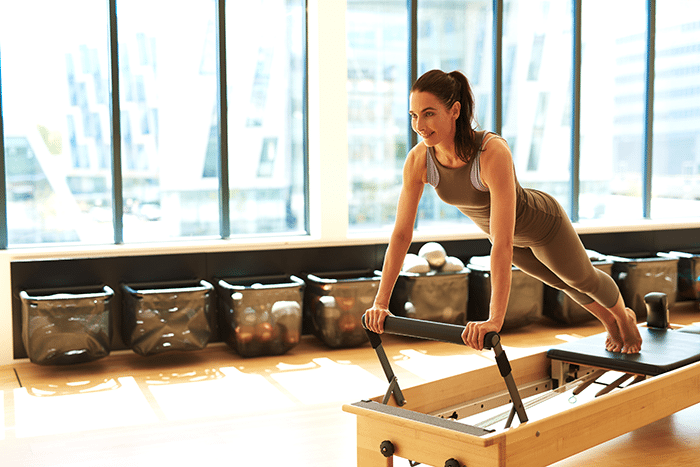 Pilates reformer classes have always intrigued and intimidated me. I picture them as this incredibly difficult yet exclusive workout for celebrities in Hollywood.

I took my first class on a reformer to de-mystify the workout, mostly for myself, but also to prep anyone who also might want to give it a shot! Here’s what you can learn from my hour on the contraption.

Don’t be afraid to set up by a mirror or to be next to a pro.

My first thought when I entered the studio was one of surprise; I didn’t expect to see so many reformers in the room. I pictured it as a more one-on-one, or at the very least, a very small group experience. But there are at least 12 machines, maybe more, and they were already almost full. Women were skillfully setting up their machines and warming up, so I made sure to find a spot next to someone who looked like she knew exactly what was about to unfold. My spot also happened to be right next to a full-length mirror, which I ended up using the entire class to check my form.

It can be a lot harder than it looks. Don’t get too frustrated or let that deter you.

If you’ve taken a mat Pilates class (more frequently offered in gyms than reformer Pilates) you know how focused on your core you have to be in this workout. That doesn’t change when you’re on the machine. The biggest difference between mat and reformer Pilates, to me, was how little you could ‘fake it’ on the machine. If your form is incorrect, you will feel it more immediately and the reformer won’t work the way you need it to.

I couldn’t stop picturing this scene from VEEP every time I had to look around for help while locked into this crazy contraption and the pros to the left and right of me looked like they were gliding through air.

Listen closely to the instructor’s cues to make sure you’re activating the right muscles for each exercise.

If you’re using the correct form, you will feel the muscles that should be working in a specific exercise from the very first rep. I’m used to weight-bearing exercises, but this kind of weight is so different from dumbbells, barbells or kettlebells. For instance, I can only describe one exercise that the instructor had us perform as a reclined pistol squat. But on the reformer, one foot is pressed against the foot bar and one foot is lifted at 90 degrees. You fully bend your knee to let the carriage slide to the bottom of the machine, and then drive through the ball of your foot to press the carriage away. By listening carefully to how the instructor told me to press the carriage away, I immediately felt it in my glutes and hamstrings and I was able to keep my quads from taking over the exercise.

Notice how certain exercises you’re more used to are essentially the same but can feel entirely different on the machine.

While I didn’t sweat during the 45-minute class as much as I would during a boot camp or HIIT-style class, I felt the efficiency of the way I was working. All of the types of exercises I’m so used to doing took a different toll on my body. Lunges, for example, felt entirely different on the reformer. Because you’re standing on a surface that slides out from under you, you have to maintain such concentrated focus on core stability to balance and complete each rep. It made me realize what every lunge I do should feel like, and that I often skimp on the correct form when on the floor.

Although you might not sweat like you’re used to, you won’t be bored and you’ll certainly be sore the next day.

I quickly learned that this machine has tons of purposes. It’s incredibly versatile, and there are endless combinations of exercises to try on it (all of which took me a minute to understand what to put where in order to get on the same page as the rest of the class). But I had to cut myself some slack, considering it was my first time. And I know that if I practiced regularly I would be get more out of the workout. As with anything, it takes time to understand how to safely and effectively go through the workout, but once you get the hang of it, it can yield some pretty serious results.

The smarter side of me remembered this, but as I was flailing around trying to make my machine cooperate, that little competitive voice in my head told me, “This machine cannot beat you, you can get better at this!” Which obviously made me want to buy a 10-class pass. Go figure.

I checked out Reform Chicago close to my work in River North, but there are tons of places in different neighborhoods to check out, including Flow Studios, Pilates ProWorks, Body R+D, Flex Pilates Chicago, Sana Vita Studio, Amplified Pilates Center, and Pilates Center of Chicago. Don’t be scared.