Why Running a Marathon is 75 Percent Positive Mentality 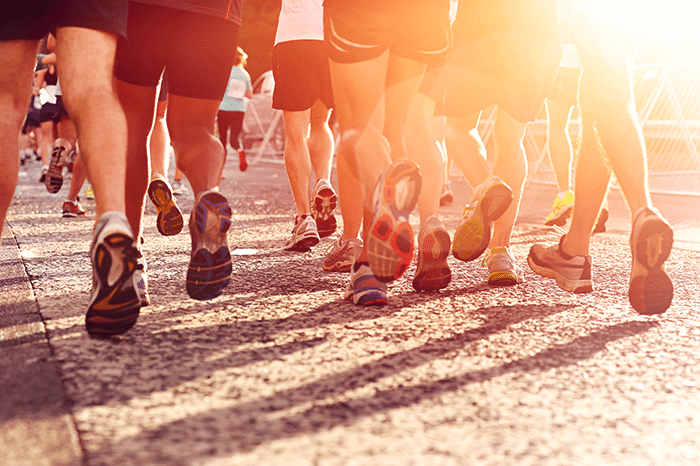 I decided to run a marathon at 8 pm the night before the race.

I’d always considered completing a 26.2-mile race one of my long-term goals. But I figured I’d do it after thoughtful consideration, months of training and plenty of mental preparation. But when the opportunity arose, I seized it.

My fiancé, Luis, started training for the Twin Cities Marathon in July. He was planning on running it with his younger brother and his younger brother’s roommate. Throughout the course of his training process, I consistently went for a run with Luis almost every weekend. The longest distance I ran was 13 miles.

Luis and I headed to Minnesota — where we both grew up — on the first weekend of October, ready and excited for the marathon on October 4. On the night before the race, my mom hosted a pasta dinner with the intention of letting Luis and his brother carbo-load before their run. After eating large amounts of pasta, Luis’ brother alerted us that his roommate was no longer planning on running the marathon.

“You could run in his place, Erin,” he told me.

At first I didn’t take him seriously — I’d never run farther than 13 miles. But the more I thought about it, the more I liked the idea. Luis and his brother convinced me I could do it despite my lack of a rigorous training plan.

So the next morning, I woke up at 5:30 am and got ready to go. I drank as much as I could to stay hydrated — Powerade, Performix, water. Before long I started to feel nervous and second-guess myself. What was I thinking, running a marathon without training at all? When I texted my mom and told her I was running the marathon rather than watching it, she replied with a simple “Are you serious?”

I was. And when I stood with thousands of others preparing to run in the middle of Minneapolis, I knew it was too late to quit. A part of me told myself I didn’t have to finish the race — what was there to lose? I hadn’t actually paid for it, and unlike so many of my fellow runners, I hadn’t been training for months on end. But deep down, I knew I wanted to complete what I’d set out to do.

Kathrine Switzer, the first female to run the Boston Marathon, famously wrote, “If you are losing faith in human nature, go out and watch a marathon.” After I finished the Twin Cities Marathon, I realized the true applicability of her quote. Even though they were complete strangers, countless people cheered me on as I ran. They didn’t know me, but they believed in me. My faith in humanity was restored.

I still can hardly believe I ran a marathon. If I learned anything, it’s that running a marathon is 75 percent mentality. Without a positive attitude, I wouldn’t have finished.

Andy Barton, who blogged for The Guardian, wrote about the rewards of mental toughness in a marathon, stating that, “It’s our inner voice that really determines how we approach something. What we are saying to ourselves at any moment will determine how we feel about race day.”

While I trained a little, my body was not physically prepared to run 26.2 miles straight. But it was my mentality that got me through. Before I started the race, I told myself I could do it. For the first half of the race, I reminded myself that I felt okay and that I would finish. Even when I mentally hit a wall at mile 19, I pictured myself crossing the finish line and pushed through to the end.

Completing a marathon is no easy task, and I’m thankful I didn’t get hurt due to my lack of training. I wouldn’t recommend tackling a marathon without training, but the idea of mental toughness plays a key role in any type of running. The next time don’t think you can do something, think again — sometimes all you need is a positive mentality.