Last year, one of the best nights of my life could have become one of the worst. After hosting the red carpet of an independent film in Los Angeles, I was driving home with a great sense of accomplishment. But my mood quickly changed when I had to run from someone trying to break into my apartment building—in high heels and a designer dress, no less. I live in a large building in a prime neighborhood. There was even a (now fired) security guard on duty at the time. So, the whole incident was a bit of a shock. 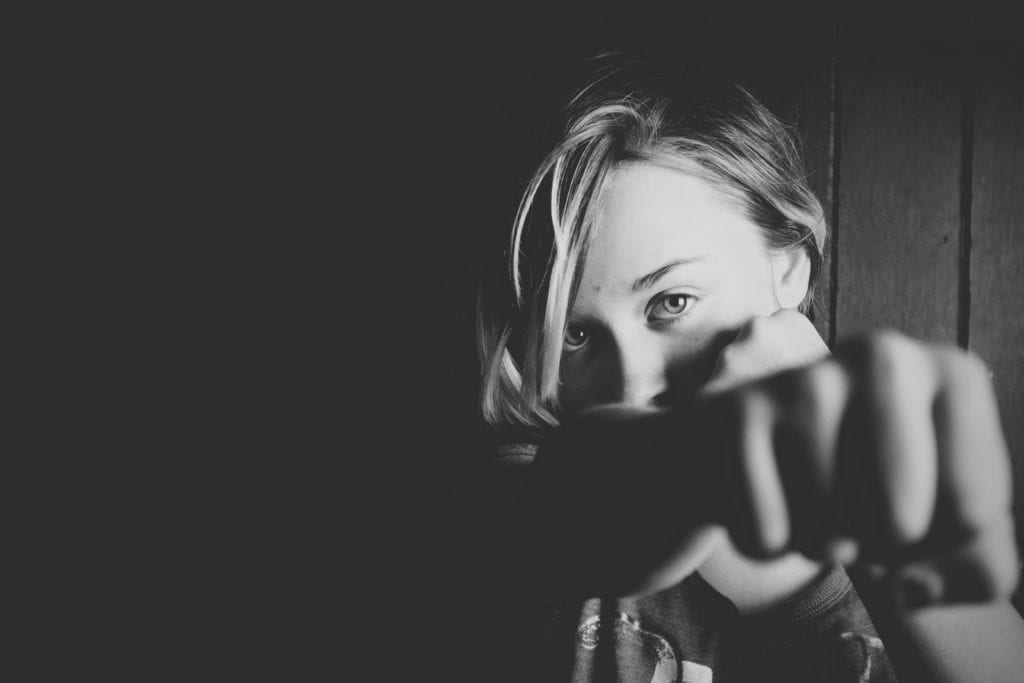 While I’m grateful nothing really terrible happened, the situation has played through my head multiple times. What if I had a taser gun? Could I have gotten back into my car and threatened to run him over? Or maybe I should have learned self-defense.

So when I learned Fight Science MMA was offering a Brazilian Jiu-Jitsu (BJJ) for class for women’s self-defense, I signed right up. To be honest, Fight Science isn’t kind of place where I would normally find myself. It’s a mixed martial arts studio where they train people to fight and offer a variety of martial arts and fitness classes. Most of the people who go there are men, but they have programs for both women and children as well.

Ian Harris, who owns Fight Science, told me they recently started this class because there is a need for it. “I have a wife and daughter,” he explained, “Especially nowadays, with the #MeToo movement, people are emboldened, but you need to learn to defend yourself. Period. Jiu-jitsu is one of the better martial arts for self-defense because it’s super intimidating.” (Want proof? Here’s a video of Ian’s daughter kicking butt.)

Considering I’ve never taken a martial arts class outside of a birthday party or two in elementary school, I had no idea what to expect. I was a little nervous because I’m not very coordinated. But, I ended up really surprised at not only how much I was capable of, but also how practical the instruction was.

My instructor was Jennifer Dietrick, a former high school anatomy teacher turned trainer and Brown Belt. We began with a warm up which consisted of several things including running and cartwheels (so much fun). But when we stated really to get into it, I totally forgot how much contact was involved. Being on top of another person felt really strange at first, and I had no idea that jiu-jitsu takes place on the ground, which is where Ian told me most altercations end up. But becoming more familiar with this aspect of self-defense is probably helpful.

What surprised me the most about BJJ was that it wasn’t as difficult as I had anticipated. Sure, it wasn’t easy, but a little bit of flexibility, strength and willingness is all most people need to learn. It’s also all lower body strength, which is another reason why BJJ is great for women, who generally have stronger lower bodies than upper bodies.

Jennifer taught me several moves that can be used in various scenarios, all of which have the purpose of temporarily disabling the attacker so you have time to get away. Here’s a step-by-step guide from Harris to three moves you can practice at home with a (really good) friend or selfless partner.

Move #1: Choke your attacker using your legs, aka “The Triangle Choke”

When to use it: When you’re on your back with your opponent between your legs.

How to do it: Your feet are locked behind them at their back. Control their posture by pulling on the back of their head with one hand/arm and hooking one arm with your other arm. Take the arm off the head and grab the opponent’s wrist, pushing their hand away from you to create space to bring your leg through.

Then, letting go of you locked legs, bring that leg through the opening you have created and throw your leg over your opponent’s head/neck. You can now let go of the hooked arm and use that hand to grab the ankle of the leg that is across the back of the neck now. Use your other foot to push off the ground and turn your body as perpendicular to you opponent as you can. Try to look into the ear on the side of the leg that is over the head/neck. Take the leg that pushed off the ground and throw it over the ankle of the leg across the neck and lock it in behind your knee making a Figure 4 shape with your legs.

At this point your legs should be wrapped around your opponent’s head with one arm in and one are out. Take the arm that is in and pull it across your body, then squeeze with your legs and pull down with both hands on the back of the opponent’s head. This blocks the carotid arteries from delivering blood to the brain and the opponent will fall asleep with in seconds. Or, if I am unable to accomplish that, I can reach the point where I can hopefully gouge their eyes and get out of there!

(Here’s a video for reference)

Move #2: Self Defense from a Cross Hand Wrist Grab

When to use it: when your opponent reaches across and grabs your wrist with his/her opposite hand, a diagonal grab.

How to do it: First and foremost, always distract from the point of attack to take focus away from the grab itself to help loosen the grab. This can be done many ways: a groin kick, eye poke, spit in the face, or Ian’s favorite, look past them and say “It’s okay officer, I got this.”

Circle your hand so that your pinky finger comes up and around your opponent’s wrist and counter grabs their wrist. Step back with that same side foot as you pull them diagonally toward the ground. Your other hand will go directly behind the elbow of the arm you are pulling. Apply pressure on the elbow as you pull on the wrist. The opponent will be forced to go to the ground as you pull and push their arm or their elbow will dislocate. When they hit the ground, a quick kick to the face and run!

One of my most empowering techniques involved popping up my hips and rolling the person on top diagonally over my body. I felt like I was also getting a decent workout and using muscles I don’t normally use. I was challenged both physically and mentally.

When to use it: Your opponent is in your guard (between your legs while you lie on your back).

How to do it: Unlock your feet from behind their back and put both feet on the ground. Reach one arm over your opponent’s opposite shoulder, going across their body and in front of their head. As you do this, use your other hand to post behind you for leverage. Your arm should go all the way over their shoulder and be able to cup their elbow as their hand is on the ground, to trap their arm and keep it from posting. Raise your hips up, bridging on your two feet and the hand posted behind you. Slam your hips into your opponent’s midsection as you turn your bridge in the direction of the arm you are trapping. Continue all they way until your opponent is on their back and you are in mount position, sitting across their chest/midsection area. Mount is the most dominant position to be in, and you are also now free to escape, run, or do whatever you need to do.

While things may go differently in real life, I feel a sense of control and empowerment I have feel before, even with just one class. And while I hope I never have to use what I learned, I’m definitely not afraid to.