What to Expect from Your First Boxing Class

If you’ve ever watched boxing on TV, then you probably never thought that it was a workout option for the average person. But boxing classes have been popping up at gyms and studios across the country, and it turns out they’re a great pick for anyone who wants to add more HIIT to their fitness routine. 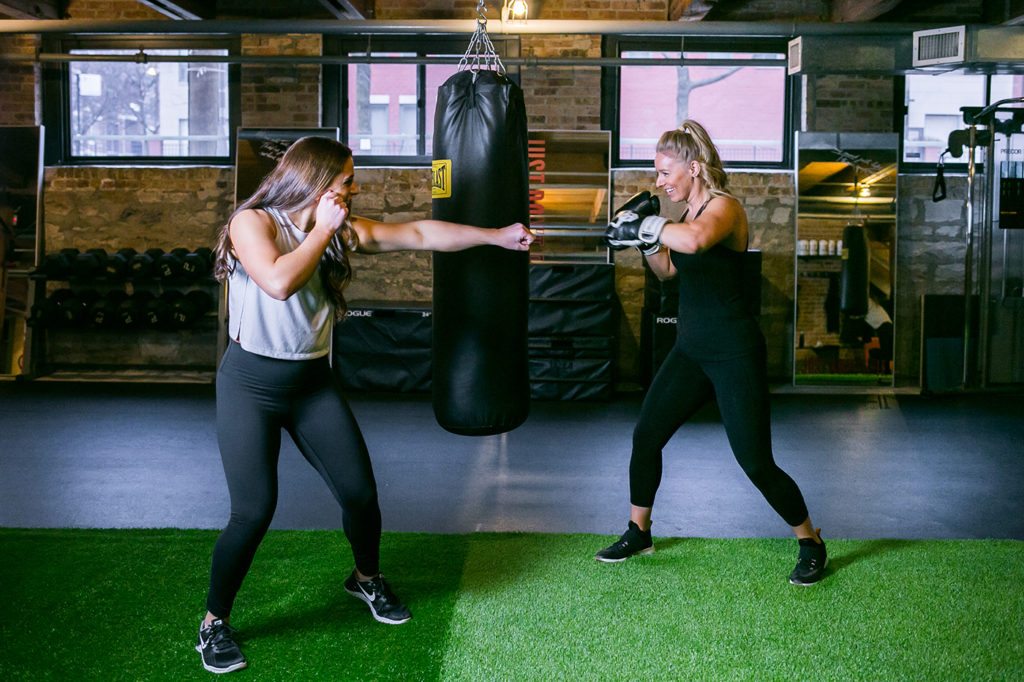 As with any new class, it can be intimidating to walk into a workout that you’re not super-familiar with. Here, learn what to expect from your first boxing class.

You’ll have to buy hand wraps and rent gloves if you don’t have them.

It wouldn’t be a boxing class without the gloves. But before you slip your boxing gloves on, you’ll have to wrap your hands. At most studios, you’ll need to buy hand wraps and rent gloves (prices vary depending on location).

“Hand wraps get sweaty and gross so it’s better to have your own,” says Courtney Belcastro, instructor at TITLE Boxing Club in Chicago. “And if you really like boxing and want to incorporate it into your weekly routine, I’d recommend investing in your own gloves because they’ll break in.”

As a first timer, you may be wondering how the heck to wrap your hands. Watch this hand-wrapping video before hitting the punching bag. Niki Farahani, boxing instructor at NEO U Fitness in New York City, also reminds you to bring a water bottle and towel with you (trust us, you’ll need them!).

It’s a good idea to get there early.

Allot yourself enough time to get to your first boxing class (they’re usually 45 minutes to an hour) so that you can get all set up and be comfortable for the start of class. “Make sure you arrive early so that you are able to get your hands wrapped by a staff member, plus the instructor can walk you through basic punches,” says Belcastro.

Skip the running shoes and wear a pair of training shoes to boxing class instead. “You want more support,” says Belcastro. Because of how much you’re doing in a boxing class, the extra support is necessary. Belcastro likes the Nike Women’s Air Zoom Strong Mid Top Sneakers ($110, bloomingdales.com) because they offer ankle support.

You’re going to have a lot thrown at you during a boxing class, so paying attention to the instructor’s cues is key. During her Strike classes, Farahani spends a good amount of time demonstrating different punches, like the jab cross and hook, and moves like the bob and weave.

She stresses that you shouldn’t be afraid to ask an instructor for help if you’re lost during class. “Don’t be scared to raise a glove if you have a question,” says Farahani. “That’s what the instructor is there for. Boxing can get intimidating, and we don’t want to push someone if they’re confused.”

Adds Belcastro, “Boxing takes a little bit of coordination and paying attention to what the moves are. You probably won’t remember the combos right off the bat.” Farahani says it takes about three classes to feel totally comfortable.

Each boxing class is different, but you won’t be hitting the bag for the entire length of the class. Belcastro and Farahani’s classes both feature warmups, rounds on the bags, and exercises off the bag (like squats, lunges, and mountain climbers).

“The cardio conditioning of boxing is second to none,” says Belcastro. Your upper body will burn when you’re hitting the bag, your heart rate will skyrocket way up, and you’ll see improved core and upper body strength, plus your cardiovascular endurance will increase as well, says Belcastro. “People underestimate the core workout that comes with boxing,” she says. Farahani recommends three boxing classes a week for best results. “Your hands take a beating so it’s best to start out every other day to get your hands used to what they’re going to do,” says Belcastro.

You’ll be ready to take on the world.

Even if you don’t master every boxing move your first class, one thing’s for certain: You will still feel like you kicked major ass.

“You feel empowered when you let yourself believe you can knock the bag down,” says Farahani. “You feel like a badass.”