How Stephanie Johnson of Survivor Found Perspective on “Ghost Island” 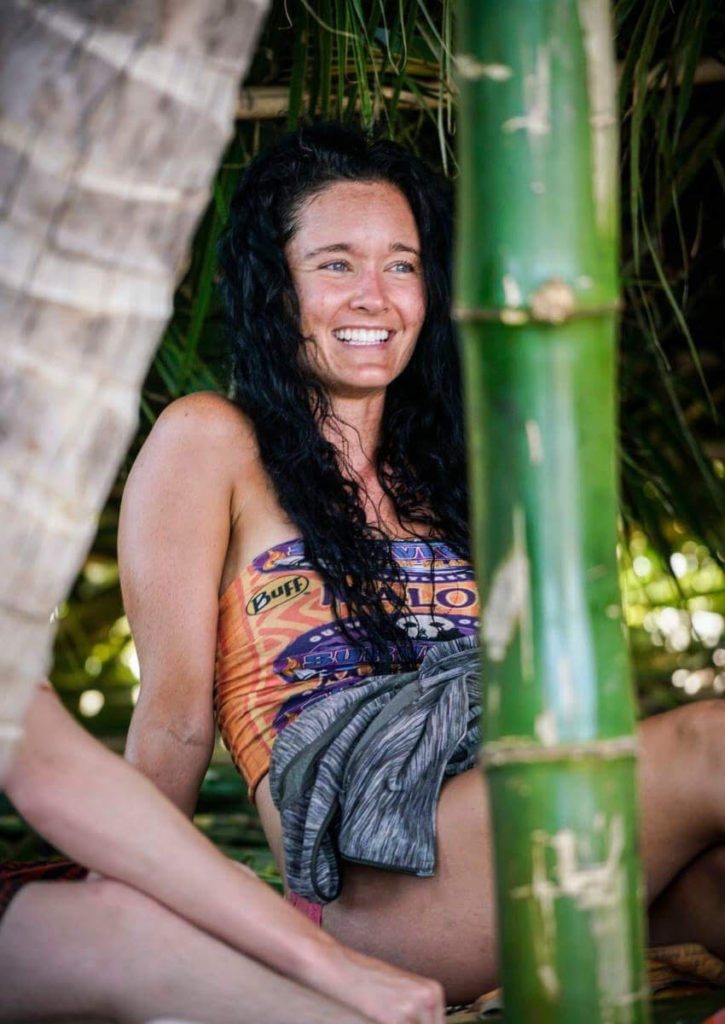 One of the more endearing parts of my personality (I hope) is my tendency to go ALL IN on reality television shows, as friends who have been forced to receive my weekly email recaps of The Bachelor and The Challenge will attest to (yes, I still watch The Challenge and am in the Bill Simmons/David Jacoby camp of considering it America’s fifth professional sport).

But I’m late to the Survivor franchise, which is mildly embarrassing considering it’s considered by many to be the greatest reality television competition of all time, with the greatest host of all time (Jeff Probst) behind the wheel.

When I began watching this season, I immediately noticed one contestant whose passion and positivity jumped through the screen — and when I learned she was from the Chicago area, a yogi who had quit her job in corporate finance, and a self-published author on the subject of female solo travel, well, I knew I had to talk to her.

The first thing you realize when talking to Stephanie Johnson of Survivor: Ghost Island is that everything she says has the subtle hint of an exclamation point at the end of it. That enthusiasm persists even in situations that would leave the rest of us despondent — like being randomly chosen for exile on Ghost Island, a precarious situation that Johnson knew would likely lead to her being voted off at the next tribal council. But instead of wallowing on Ghost Island, Johnson took comfort in enjoying her present and mentally resetting from the 24/7 nature of Survivor’s social game.

“What I allowed myself to do for that 24 hours that I was out there was to flip out of game mind and just be in Fiji on a beach by myself,” shared Johnson. “And so I climbed up on top of the rocks and I watched this sunset. I collected shells, I sat, and I had this cry fest. I just kind of allowed myself to be in the moment and experience it.”

She continued, “I knew that I was going to be in trouble if we lost, so I really wanted to soak it up, and that ended up being my last sunset in Fiji was alone on Ghost Island. I didn’t want to go out, but I’m glad that I was able to at least watch [the sunset] and take advantage of it  — and kind of do that alone.”

The second thing is that when Johnson goes in on a big goal, she goes ALL. IN. Like quitting her job in corporate finance to immediately travel to Hawaii for a month-long yoga teacher training. Or like deciding to trek and backpack solo through nearly 50 miles of Patagonia, despite never having taken on a journey of that magnitude before. Or, like watching the first season of Survivor in 2000 and deciding it was her destiny to be on the show — and then applying for 17 years in a row until the casting department decided it was time to put her on.

Reminisced Johnson, “I was sitting in my college dorm room at Utah State University, and the show came on and it sparked a sense of wonder and adventure in me, and it was something that I didn’t know existed until I saw these crazy people out on an island surviving — but for some reason that seemed so appealing to me. And so I started applying season two and I can’t even tell you how many applications I have sent in over the years because we used to have to do them on VHS tapes!”

The beauty in Johnson’s story comes from the fact that while she was constantly applying to Survivor, she was finding fulfillment in her life in other ways — and eventually, chasing those passions became what got her cast on season 36.

“At some point you have to just go on and live your life and keep pursuing the dream. You have to carve your own path and your own journey and your own experiences,” Johnson believes.

And that life event that eventually led to her (finally) getting cast?

“Honestly, it happened because of Ironman Arizona — that’s when I caught their attention. It’s like I said: I needed to build up this life experience, but [the triathlon] was just my passion. I never went in to triathlon or running with the intention that it would get me on Survivor, but by doing what I loved and just following my heart and my curiosities it, [Survivor] came to me. It was just like the domino effect: one thing after the other, after the other, until it finally transpired.”

And while she may not have won this season of Survivor, Johnson isn’t done chasing big goals — and she gave us an exclusive on what’s coming up next for her.

“I am going to enter the world of real legit ultra running, and I want to do a 100 mile race so I’m going to be planning on doing that sometime soon.” Johnson confides. “After being in Patagonia out there in the mountains, it really spurred that desire to do these hundred mile endurance races that I see all my friends doing, and it seems almost like a spiritual experience. I know that sounds really weird, but I really want to tap into that mental strength that it takes to do that.”

After listening to our interview, you can watch Johnson in the live reunion finale of Survivor: Ghost Island on Wednesday, May 23. And if you enjoyed listening, subscribe anywhere you get your podcasts and leave us a rating or a review on Apple Podcasts.