#WeGotGoals: Chicago Tribune’s Heidi Stevens Shares Big Goals on and off the Page 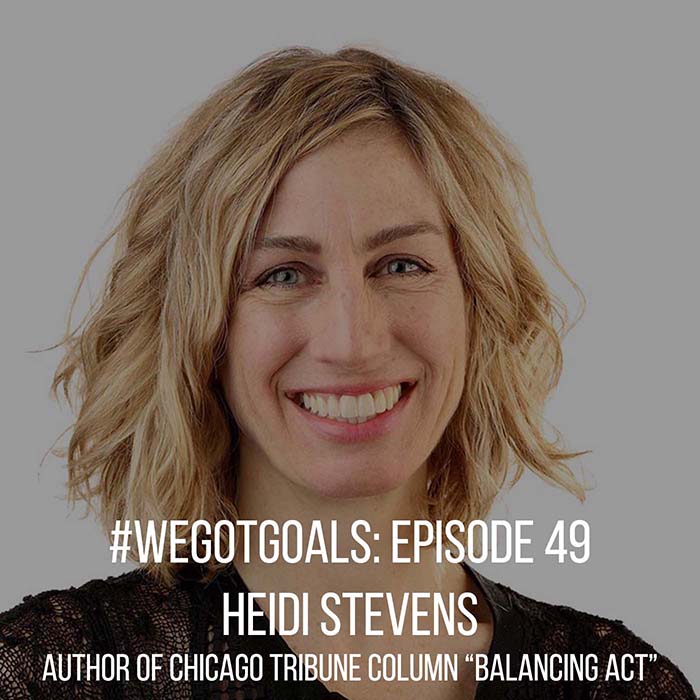 “The one with the hair” is a moniker she’s come to embrace. In 2015, Heidi Stevens considered her then-new photo for her Chicago Tribune column “Balancing Act” unremarkable – until her inbox flooded with commentary from her readers.

She shared a few in a piece for the Chicago Tribune, with gems like.

“For heaven sake, comb your hair.”

“My neighbors and I give you permission to shoot your hairdresser.”

While Stevens was taken aback by this overwhelming response to a style that is arguably on-trend and beach-y, she took it in-stride and sought to learn why readers were so quick to comment on her appearance along with that of her female colleagues.

She wrote this of the surprising responses: “Each one takes me aback. Not because my hair is above reproach, but because my hair is completely beside the point. It’s unremarkable in appearance (not dyed fuchsia, not shaved on one side) and has no relevance to my job: I’m not a model; I’m not selling hair products; I don’t work at a salon.”

She continued, “Is this really where we’re stuck as a culture? At a place where we drown out women’s voices with critiques of their hair?”

It was this delightful refusal to be put into an Instagram filter that caught national attention – Today.com, NY Daily News, and AOL – and landed Stevens squarely in my Facebook news feed. She quickly became one of my feminist icons and her column a must-read.

She’s written about numerous topics besides her hair (like parenting, the #MeToo movement, health and her reactions to what’s happening in the world around her), but people like me keep bringing up the hair incident. And through her writing, I feel like she and I are on grab-a-coffee terms, but I’ve never gotten to ask her the most pressing question we have around aSweatLife: What are her big goals?

This week on the #WeGotGoals podcast, Stevens popped by to answer that and she shared her 20-year journey with the Chicago Tribune, working across the publication – from an intern to a section editor to a columnist. As we talked through her tenure, she shared that landing her column was the goal that made her the proudest.

“I found myself really called … to help other people and women especially feel less alone in whatever they were going through,” she explained why it means so much to connect with readers week after week.

The tone of admiration for the readers that challenge her, frustrate her (and her stylist) and connect with her in this interview struck me the day after. I talked to Stevens just before she and 45 other Chicago Tribune Journalists announced they were forming a union, The Chicago Tribune Guild. It’s a brave move that has been historically unsupported by a consolidating journalism industry – in one case leading to the sale of a publication (the Los Angeles Times) and at worst-case the scrubbing of the web of any trace that the publication ever existed (Gothamist/DNA Info).

With an extraordinary tenure, Stevens clearly loves the Chicago Tribune and the field of journalism. Listen to this week’s episode of #WeGotGoals and follow @HeidiStevens13 and @CTGuild to connect more with the journalists she’s walking alongside.