This Is How to Avoid Injury this Marathon Season

As I accelerated up to my sprint speed, I felt the ever-so-slight pop in my calf and groaned inwardly.

The pain that followed was certainly noticeable but not outright obstructive and with a few slight tweaks I figured I could make it through the rest of my workout. But as the treadmill whirred through each interval, there was a little part of me thought, “Maybe you should stop. This could be the moment you’re regretting weeks from now when you’re still nursing an injury.”

And perhaps if I had been following some sort of recovery plan—doing the requisite stretching and foam rolling and taking an appropriate number of rest days—I wouldn’t have needed to even worry about it.

My story is hardly an anomaly, says former athletic trainer Tony Vidal, CTO and creative content strategist of Beast Fitness Evolved. Recovery practices aren’t the sexiest or flashiest parts of fitness, he admits: “You rolling out your quads is not going to get a lot of Instagram likes.” Which means people tend to forget about them altogether right up until the point they get injured.

Which, he says, is incredibly likely.

Think of recovery practices as a sort of systems check to ensure nothing in your body is getting just a little out of place. “If you’re not moving in the proper alignment and if you’re not moving with proper support,” he notes, “just like any other machine, after awhile you’re going to break down.”

Having seen that scenario play out approximately a billion times, give or take (how often have you made it through a marathon season without having to take a few weeks off tending to a sore knee or inflamed IT band?), Vidal is making it his mission to change the narrative. 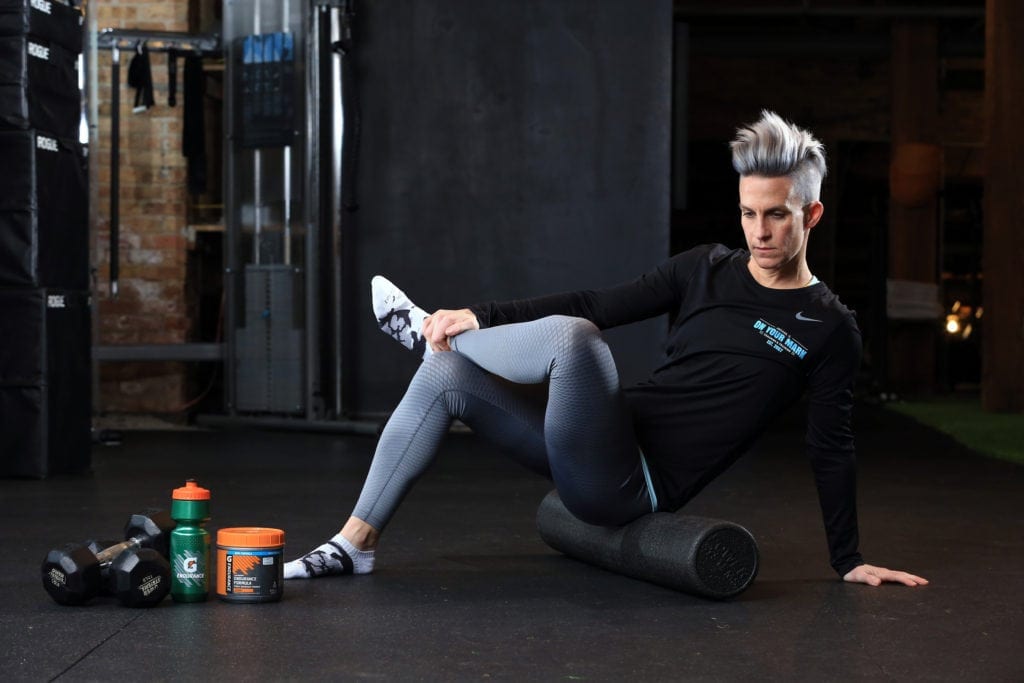 “It gives you a chance and an opportunity to really get into paying the body back with the deficit that we create with the amount of activity or positions that we go through in the course of the day,” he explains.

Each class follows the same structure. “We want to start by inhibiting,” says Vidal, “which is going to be that soft tissue treatment.” This phase involves a series of foam rollers (some vibrating!) that work to “pretty much get the central nervous system to calm down and take some of the tightness that might be localized to different muscles and try to get some type of work to them,” he says, “kind of similar to what you would see in a massage.”

In other words, it’s equal parts hurts-so-good and straight tension easing and really works to loosen up any tight areas.

Next up: lengthening, the portion that relies on tools such as yoga straps to move you through different dynamic stretches. Explains Vidal, “We want to be able to take the muscle that was short and over-tight and give it some length to try to restore that normal function.

Then you activate, or try to isolate and engage muscles that may not be working properly. “The body is a system of pulleys,” says Vidal, “so if something is not working on one side it means there is some imbalance going on with the opposite side of the joint.” For example, someone with tight hip flexors may not be fully accessing their glutes, so a bit of bridgework and lunges might wake that area up.

And, et voilà, you’ve tended to those overly tense muscles that could easily lead to injury and put in the work to correct any imbalances that are almost guaranteed to lead to injury.

And while having a pro lead you through step-by-step is undeniably helpful, you don’t need to book a trip to the East Coast to reap these benefits.

Busting out your trusty foam roller at home for just 10 minutes a day is one of the easiest—and most beneficial—ways to up your fitness game, says Vidal.

Ideally, he suggests, you’d invest a little bit more time, working through a routine that targets any areas of your body that might be a bit tight or inflamed both before and after your workout session. If you’re a runner with tight calves, for instance, he details, “It might make sense to really do some work on the feet and the calves before you start your normal warm-up.” Afterwards, he continues, take time to focus on those spots again and any other areas you tend to find tightness.

But if bookending your workout isn’t an option, he prefers doing that foam rolling and stretching post-sweat as a cool down. It’s also key to note any changes in your muscles as you exercise. “Your body is going to give you signs of when you’re feeling something bad,” he swears. “It might show up one day as ankle pain. It might show up as back pain. It might even be in your shoulder. Because the fascial system is all connected, every body is going to manifest and compensate differently.”

This time around, for me, it’s manifested in a calf muscle that’s felt equal parts tender and sore. Three weeks of repeating the same rest, heat, ibuprofen, attempt to run cycle led to constant re-injury. So I was all too happy to take some of Vidal’s tips, starting with a Tame session that left me feeling looser than I had in months and continuing with my own at-home foam rolling routine.

I’m not quite at the “let’s go for a long, pain-free run” stage, but I am a recovery convert and really trying to commit to a nightly date with my Tiger Tail. As should pretty much any regular exerciser, but certainly those putting their body through the grueling process of marathon prep.

“Soft tissue treatment could be right up there with flossing,” stresses Vidal. “Some type of foam rolling or stretching will have exponential benefit on how you move.”