This is not an exaggeration: from kindergarten through high school, I ate the exact same breakfast at home every day of my life: a bowl of Lucky Charms with skim milk in my FAVORITE pink cereal bowl with the built-in straw for sipping milk. At summer camp and sleepovers, I felt a little bit off if I couldn’t have *my* breakfast.

And while I’ve loosened up slightly since then, I am still a creature of extreme habit when it comes to food. It’s embarrassing, but my food attitudes and resulting behaviors are pretty restrictive, tied up in illogical beliefs that if I don’t eat exactly a 1/2 cup of oatmeal with a tablespoon of peanut butter every morning, I’ll spiral out of control and start pairing Ben & Jerry’s with my coffee. Or that if I don’t eat every three hours, I’ll come home so starving that I eat everything in the pantry, expired BarkThins included.

But a trip through Italy and Greece forced me to upend all of my eating-related routines and face my food anxieties head-on.

In a typical day, after sleeping in, sight-seeing, or beach-lounging on empty stomachs, we ate lunch around 3 pm or 4 pm. We’d reconvene for dinner (post-siesta) around 9 pm, often not eating until nearly midnight. Breakfast, if I was hungry, was an RXBAR or on-the-go gelato. 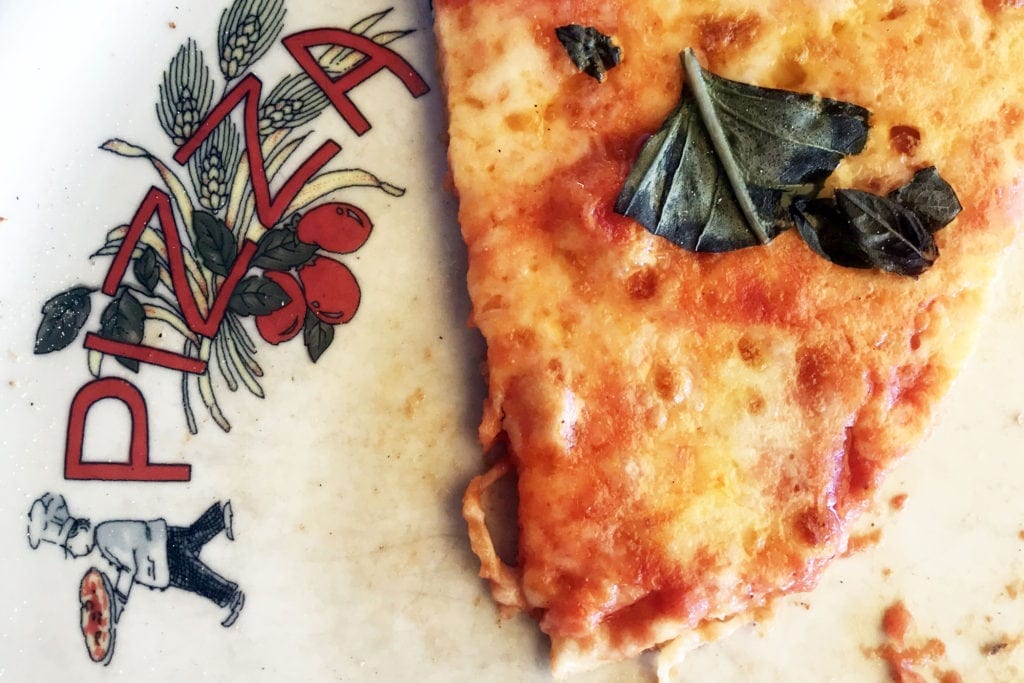 Not to mention the actual food we were eating — cacio e pepe, fresh-baked bread dunked in olive oil, an impressive streak in which I ate Neapolitan-style pizza four days in a row, and lots (LOTS) of wine — is far outside my normal fruit- and veggie-centric diet. While I know that carbs aren’t inherently evil, my lizard brain still has a hard time overruling everything the media has pumped into my head for the past 20 years.

I’m eye-rolling at myself as I write this — “Poor me, forced to go to Europe and eat pasta with red wine every night” — but I can’t deny that I experienced slight anxiety going into the trip about what I was going to eat and whether I was going to feel gross in a bathing suit afterwards.

Eventually I embraced the vacation mindset and recognized that this was a temporary, enjoy-it-while-it-lasts excuse to sample everything on the menu. Here’s what else I found at the end of a two-week, no-bite-left-behind tour de Europe.

Intermittent fasting isn’t as impossible as I thought it was

At home, I usually wake up physically hungry, which leads me to eat as soon as I wake up most mornings. Intermittent fasting was just not in my practice — or so I thought.

But with built-in breakfast removed from the equation on this trip, I had to actually consider whether I was hungry enough to spend money and time waiting in line for a potentially sub-par pastry (because let’s face it, Italy and Greece aren’t exactly known for their breakfast foods). Most days, that just wasn’t worth it. If I was starving, I reached for a cappuccino, water, or bar to tide me over. And with late lunches and dinners, it wasn’t unusual to go 14 hours without eating and still feel full.

Pre-trip, I lived in constant fear of being hungry. I am that crazy lady who has multiple snacks in her bag at all times, and sometimes even a full meal. Heck, I bought instant oatmeal before we left to take on the trip in case I needed emergency breakfast.

But I realized while we were in Vatican City, rotating through tours of the catacombs, St. Peter’s Basilica, and the Sistine Chapel (all situations in which it’s frowned upon to eat a granola bar), feeling hungry for a couple of hours wasn’t going to kill me. If anything, it just made me appreciate my next meal all the more.

Yes, there were a few times when I turned to my boyfriend and said, “I need to eat in the next five minutes or you’re not going to like me very much.” Intense hunger can hurt concentration and increase irritability, making it key to eat before your hunger reaches desperation levels.

On the other hand, “mild to moderate hunger is normal, and it’s something you should be experiencing about four times a day,” explains Cynthia Sass on Shape.com. Hunger is a sign that your metabolism is cranking, your fuel storages are depleted, and it’s time to eat again. Eating on a schedule (rather than eating intuitively) may trick you in to eating more than you actually need.

I’m more adaptable than I give myself credit for

Looking back, my trip was an intensive in exposure therapy. Forced to confront my food-related anxieties, I could easily see that the world didn’t end and my clothes still fit if I ate pasta for lunch and dinner with a double-dose of gelato.

Italians have a phrase that runs close to my heart: “Non tutte le ciambelle riescono col buco,” or, not all doughnuts come out with a hole, meaning not everything goes according to plan. Now that I’m back stateside, I’m trying my best to stay flexible when my food routines don’t match up with what my body actually needs or what my circumstances allow for. My goal? To not fall back into mindlessly rigid habits while paying closer attention to what my stomach is trying to tell me — and whether it’s hungry for a doughnut over oatmeal.