With some airlines, it’s cheaper to leave the country and head to Iceland than to fly domestically to my hometown of Portland, Ore. To be fair, once you reach Iceland, prices for food, lodging and rental cars are steep. True story: My husband and I paid $53 for two bowls of fish soup and three slices of homemade bread during our visit earlier this year.

But if you can look beyond the cost, Iceland offers an endless array of spectacular outdoor adventures. Create your ideal active itinerary by mixing and matching from the hikes described below, and don’t forget to check out Kristen Geil’s fit country guide here.

Part of the popular Golden Circle Tour, Thingvellir National Park straddles the North American and Eurasian tectonic plates, which are moving away from each other at a rate of roughly 2.5 centimeters per year. This geological phenomenon results in a rift valley – the only one above sea level in the world – defined by rocky ridges. From 930 to 1798, Icelanders gathered at Thingvellir National Park to conduct parliamentary sessions. 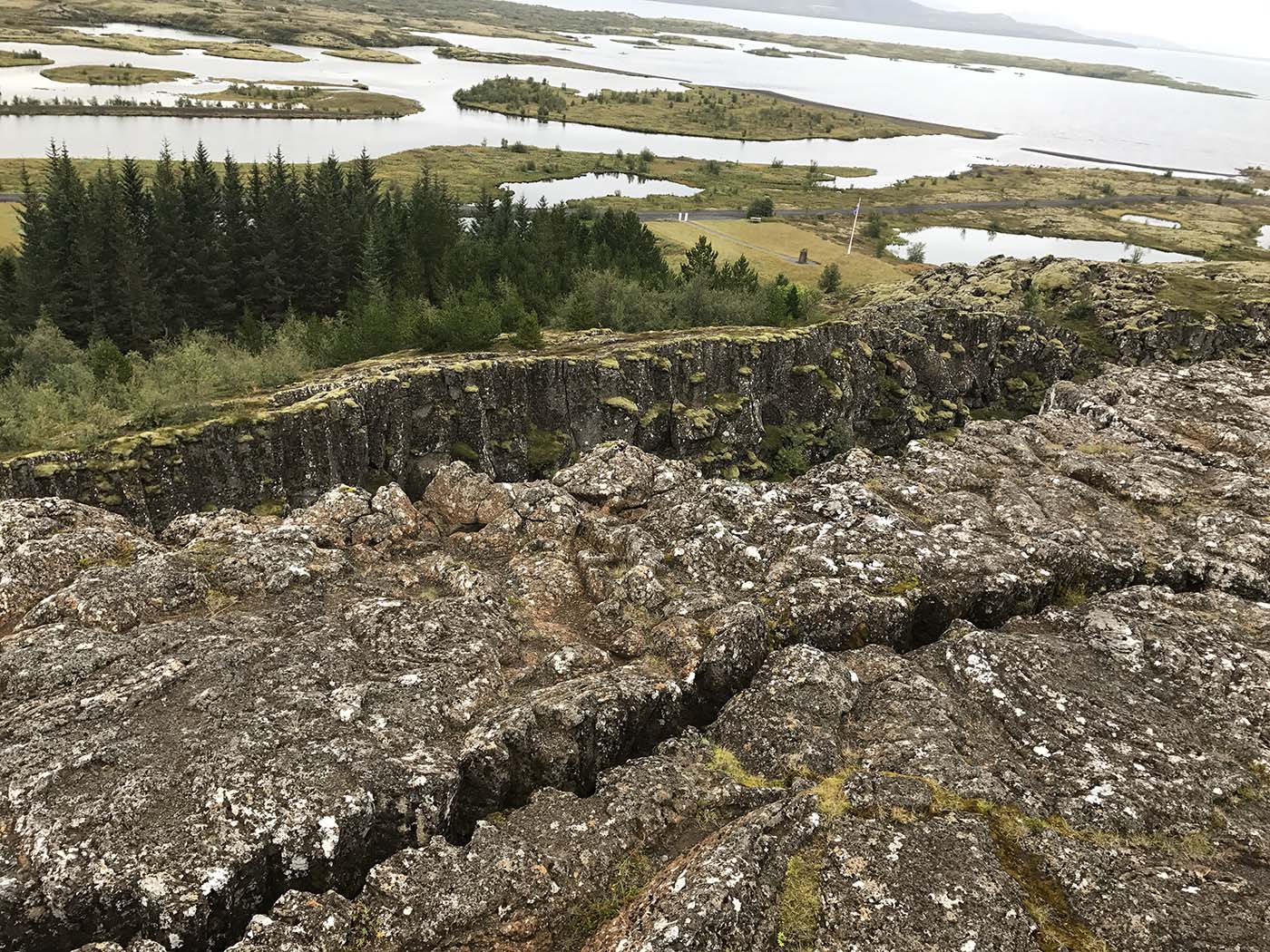 Hiking in Thingvellir National Park isn’t complicated. Simply follow the trail (or let’s be honest, the crowds) straight through the massive rock ridges. Mosey onto the occasional side trail for elevated viewing and photo ops, or meander down to Thingvellir Church. When you’re back on the main path, veer to the left to check out Öxaráfoss Waterfall before continuing onward and slightly upward to the end of the trail, which tends to be less clogged with tourists. 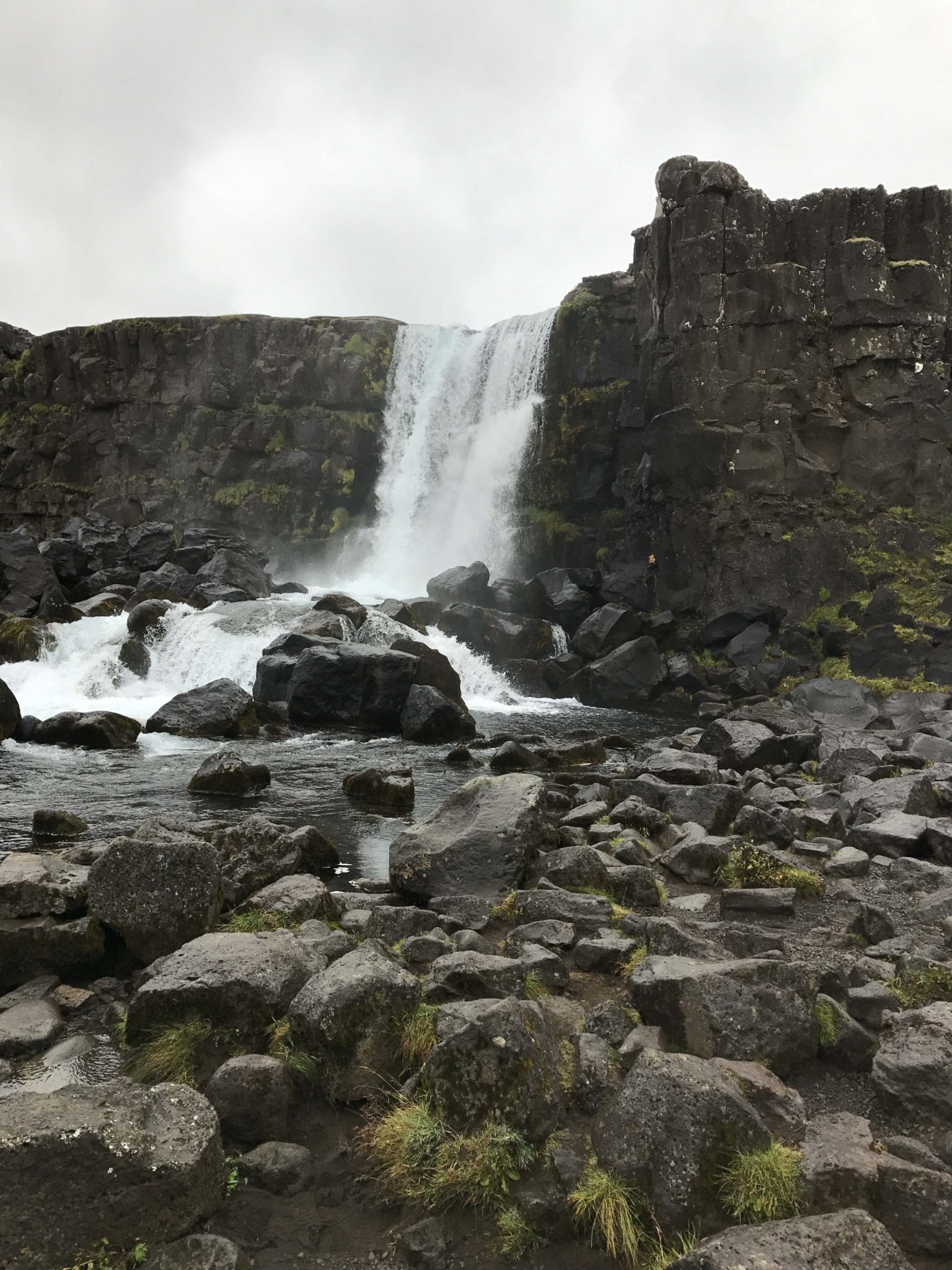 Unlike other hikes where the waterfall is the reward for all your hard work (see the Glymur section in Kristen’s article), this hike actually begins at the dramatic Skógafoss Waterfall. As you admire the falls, you’ll notice right away that a long staircase winds along the adjacent hill. Don’t be fooled by the relative shallowness of each step – this serpentine climb will set your lungs and calves burning!

At the top, take a moment to pat yourself on the back for getting in your daily dose of cardio. Then challenge yourself further with a hike above the Skoga River. Passing through the gate at the crest of the falls, continue along the ridge. You’ll soon be treated to several magnificent mini-waterfalls cascading around the bends of the river below.

Move onward and upward, wave at the sheep milling about in the fields and don’t be surprised to encounter tired-looking hikers with large daypacks. The trail above Skógafoss is part of the 25-kilometer Fimmvörduháls hike to Thorsmork. Accessible only during the summer months, this 1-2 day trek requires advance planning and preparation. But you can still get a taste of the experience on this short portion of the trail.

My Lonely Planet guidebook informs me that more than half of Icelanders believe in supernatural beings, whether they be trolls, elves or fairies. After walking a 2.5 km hike through surreal lava fields on West Iceland’s coastline, I understand the impulse to believe. My husband, meanwhile, likened the landscape to a “Star Wars” planet. 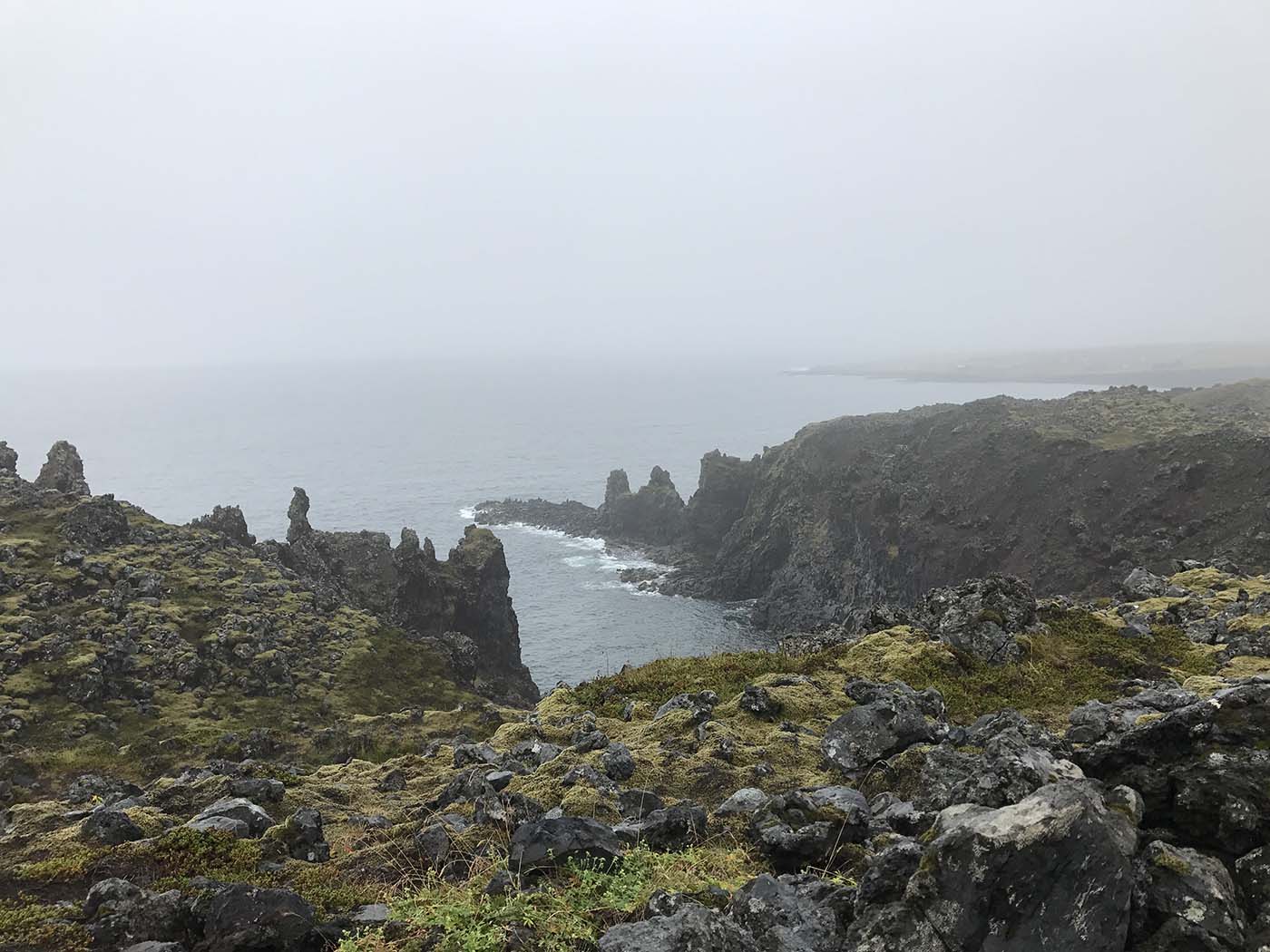 We started our hike in Arnarstapi, a desolate, defunct fishing village whose highlights include a natural rock arch framing the ocean and a large statue of Bároar Snæfellsáss, a mythical figure whose spirit is said to guard the Snæfellsnes peninsula. While we didn’t see any signage, we knew that our destination, Hellnar, was west of Arnarstapi, so we set out in that direction. We crossed over a bridge, passed through a gate and entered a spectacular landscape of rock, lichen, moss and grass. Tucked away among the rocks, we could barely hear the crashing ocean beyond, though we did catch occasional glimpses as we traversed the rough terrain. 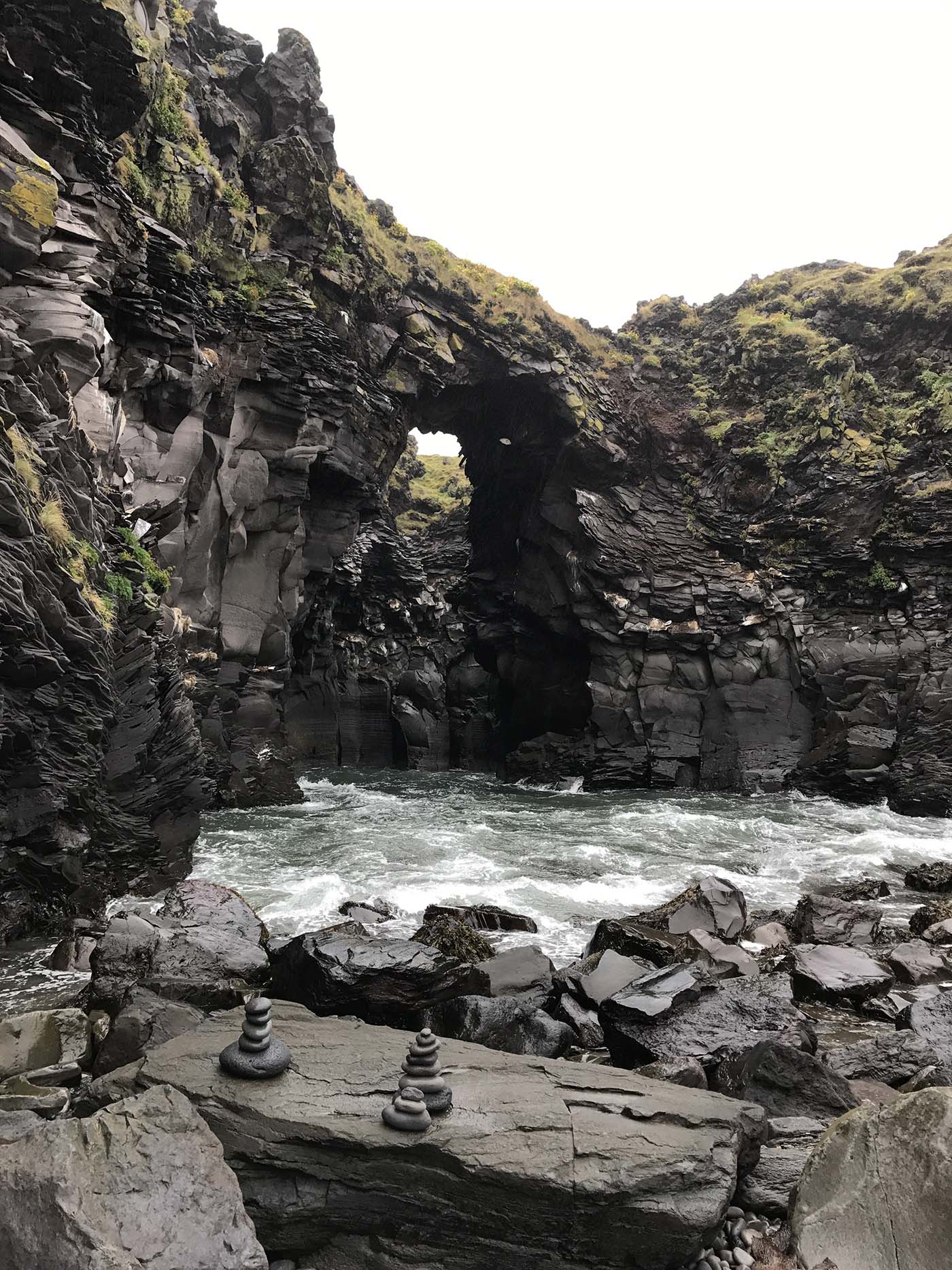 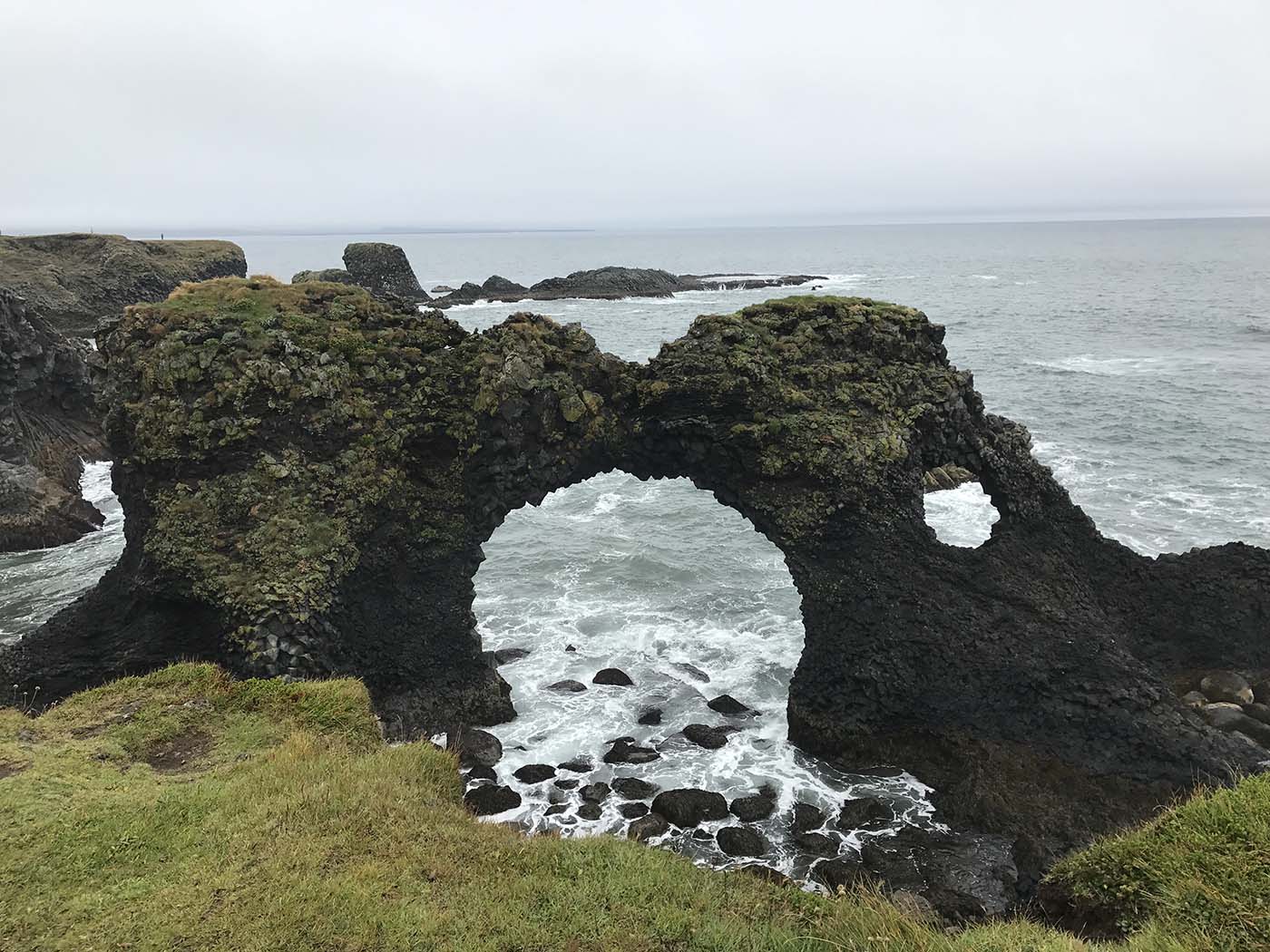 Though not well marked, the “path” was easy enough to follow. It ultimately deposited us on the coastline bordering Hellnar, another small “town,” where dozens upon dozens of rock cairns added to the supernatural vibe. Fjöruhúsið, a cozy one-room restaurant on the hill leading into town, was the site of the infamous $53 soup incident, but can you really put a price on the experience of slurping a delicious hot soup on a rickety porch in chilly weather as you stare out at the endless ocean? 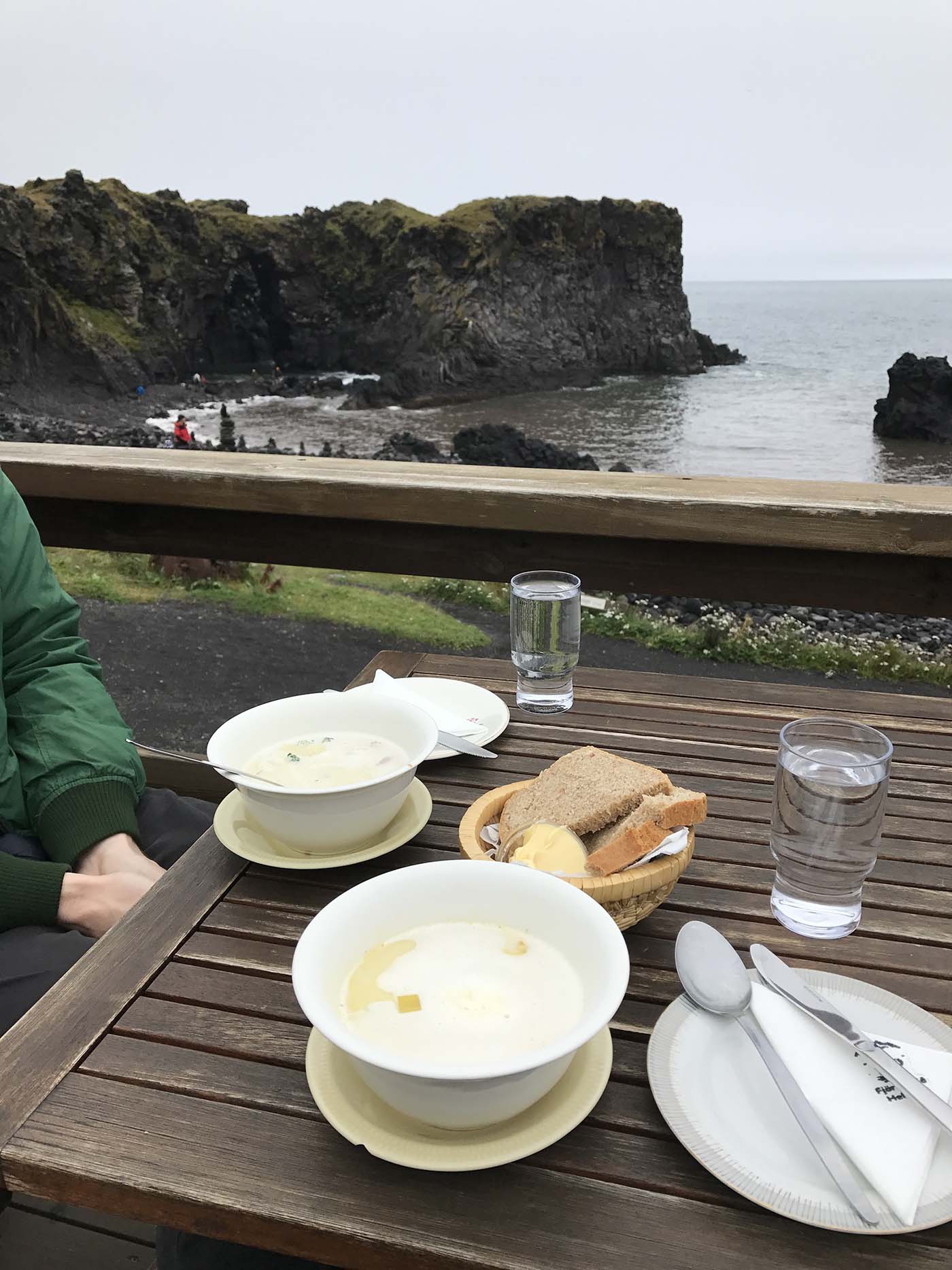 Pro tip: If you’re disinclined to cough up $53 for two bowls of soup, stop at the fish ’n chips stand in Arnarstapi before hitting the road. For $20, you’ll get three thick pieces of freshly fried fish and a pile of crisp, toasty fries. Or do what we did and splurge at both places!