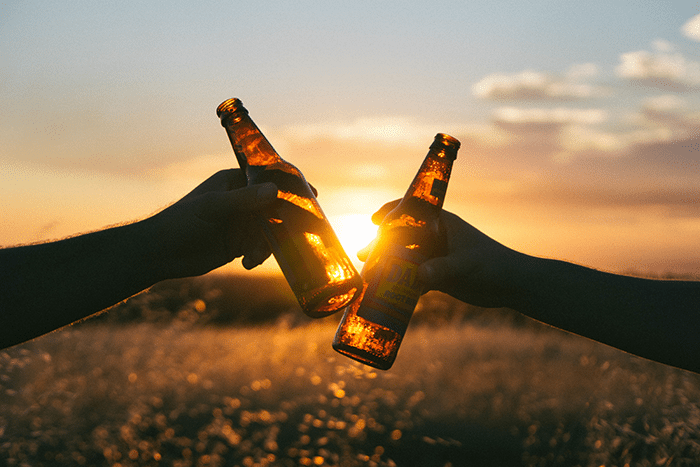 I’m kind of new to the race world. It wasn’t until about a year and a half ago that I ran my first 5k. At the finish line, there was the expected post-race snacks and drinks like water, Gatorade, bananas, some sort of energy bar – but there was also something that surprised me: Beer! At the time, I thought it was a little odd, but I still grabbed my beer (I wasn’t new to the beer world) and went on my way. After finishing more races, I realized that the congratulatory beer was the norm.

I started to wonder if the beer at the end of the race was more than just a way to celebrate but actually served a purpose. Beer has electrolytes, beer has carbs – both can help with recovery after a workout, right? According to Associate Professor Ben Desbrow from Griffith’s Menzies Health Institute Queensland in Australia, “A low alcohol beer with added sodium offers a potential compromise between a beverage with high social acceptance and one which avoids the exacerbated fluid losses observed when consuming full strength beer.”

Basically what Desbrow is saying is that a lighter beer with added electrolytes can help combat the dehydration effect heavier beer has. That’s not quite the green light to skip your Gatorade and head straight for that IPA, but if you are craving a beer, the lighter option the better.

So what about the Michelob ULTRA ads showing various athletes boxing, squatting, jumping and even doing yoga? All are breathing heavily at the end of the spot, when the viewer hears the slogan “Brewed for those who go the extra mile.” Is Michelob ULTRA telling me a beer is going to push me to be a badass athlete?

Not quite. According to John Hawley, an exercise and nutrition researcher at Australian Catholic University quoted by NPR, alcohol impairs some of the protein signaling molecules in the body. “These are the traffic lights that turn on protein synthesis” he said. Ultimately, alcohol slows this protein synthesis process down, thus slowing down muscle growth.

A beer will never replace the rehydrating effects of water or a sports drink, however, if you need your celebratory fix, reach for a light beer. Is it recommended to start chugging beers after each and every workout, absolutely not. The last thing you want is to slow down your muscle growth and impair your next workout. However, on those occasion a post work out beer is available, it is ok to reach for one and cheers the athlete next to you. After all, I’ve never had a beer taste as good as that post marathon brew handed to me at the finish line.

1 thought on “Should You Grab That Post Workout Beer?”