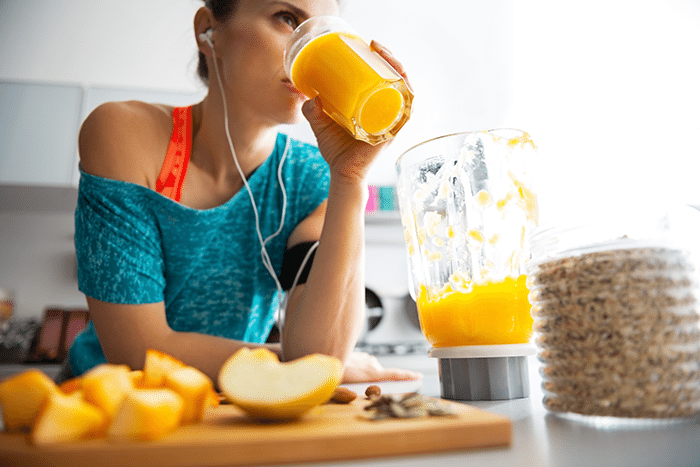 When it comes to healthy eating, part of our job as informed consumers is to critically sift through the fictitious diet tips we are bombarded with on the Internet and ensure the food we put in our mouths is actually good for us. For the most part, it’s relatively easy to tell which fad diets will flop and which ones actually make sense. But I’m betting most of us have actually adhered to these two food myths.

Myth 1: Skipping breakfast slows down your metabolism and contributes to weight gain.

Myth 2: Carbo-loading at dinner on the evening before intense physical training can delay the onset of muscle fatigue.

For decades, the food industry has proclaimed breakfast a critical daily ritual. Many of us believe this is true because we’ve heard skipping breakfast trains your metabolism to slow down, ultimately leading to weight gain. However, such claims have not been substantiated by science, according to The New York Times.

Observational studies conducted in the subsequent decades claimed to find people who ate breakfast tended to be leaner, though researchers could not conclusively prove cause and effect. Regardless, many health authorities and food companies continued to claim eating breakfast staved off weight gain, The New York Times reported.

However, recent experimental studies have consistently failed to evidence this belief. In one experiment published by the National Institutes of Health in February, in which some participants were assigned to eat breakfast everyday for six weeks and others were assigned to skip it, study authors said they found no difference “in weight change and most health outcomes” between both groups, according to the report.

To put it plainly, James Betts, PhD, one of the lead authors and an associate professor of nutrition and metabolism at the University of Bath in England, wrote, “Whether or not you have breakfast in itself is not going to impact your body weight,” according to the report.

The first time I heard “carbo-loading” — consuming large quantities of bread, pasta, bread, donuts? bread — was a thing, I knew I had to get on the high-intensity workout bandwagon. It was a double win, because the excuse to gorge myself with my favorite foods also afforded me the opportunity to ask, “Is butter a carb?” to anyone who would indulge me (if you don’t get the Mean Girls reference, just carry on reading).

It’s a long-held belief among endurance trainers, dietitians and coaches that eating lots of carbohydrates the night before engaging in intense, prolonged physical activity — like long-distance running or swimming — helps athletes preserve energy and prevent muscle fatigue. This is because carbs, which are digested into sugars, “are the body’s first choice as fuel during exercise,” according to The New York Times.

However, a recent study found skipping carbs at dinner was actually associated with improved athletic performance and burning more body fat, according to the report.

These findings align better with another camp of dietary experts, who suggest enhanced athletic performance may depend on training the body to use fat as fuel, as the body’s reservoir of stored carbohydrates is relatively small at any given time. Low-carb diets force the body to use fat for energy. However, muscles grow accustomed to burning fat over time, making sustaining hard workouts difficult when limiting carbs.

So what to do?

Researchers at the French National Institute of Sport, Expertise and Performance decided to test how a modified form of a low-carb diet, called “sleeping low,” impacts athletic performance. According to The New York Times, a sleep-low sports diet involves skipping carbs at dinner, forcing the body to use fat stores for energy during morning workouts, then replenishing carbs later.

The researchers, who published the findings of their study in January in Medicine & Science in Sports & Exercise, hypothesized a sleep-low diet would yield the most positive effects if it was integrated into a broader training plan.

To test their theory, they divided a group of 21 experienced, competitive triathletes into two groups and put them through simulated triathlon training to compare their fitness and pace. Half of the participants were randomly assigned to the control group and ate large quantities of carbs at every meal and after workouts. The others were placed in a sleep-low regimen. This group ultimately ate the same amount of carbs per day as the first group, but all of their carbs were consumed during breakfast (after the morning exercise) and lunch, with none at dinner, according to the report.

Both groups began a new training program, in which an intense morning exercise depleted their stores of carbohydrates. They then ate carb-rich breakfasts and lunches, participated in challenging interval exercises in the afternoon and then ate dinner, with the sleep-low group forgoing carbs.

The experiment lasted for three weeks, with the athletes training intensely for four days per week and cross training the other three. At the end, the athletes in the sleep-low group exhibited marked improvement. They were about 75 seconds or three percent faster at the 10-kilometer running leg at the end of the race, while the control group showed no improvement. The sleep-low group participants also lost body fat, and the control group did not, according to the report.

This diet is not for everyone, the study authors say, though they did note most of the participants in the study have adopted a sleep-low diet.