What I Learned from Three Weeks of Calorie Tracking

I made a deal with myself – I could buy a scale, so long as I only checked once a week. Once a week, tops. Fridays only, with no judgments; TGIF.

Spoiler alert: there’s a reason I said I don’t own a scale, and right now said scale resides in the deep, dark depths of my hall closet under boxes of Christmas decorations. But I’m a sucker for experiments.

I know a few calorie counters. I’ve never been one myself; perhaps because I like to believe I have a holistic view of my health, but more honestly, I take on an “ignorance is bliss” policy when it comes to my food. As with most things, I’m sure there’s a happy medium; admittedly, I haven’t found that ‘medium’ yet.

Over the past few weeks, I decided to try find some balance with calorie tracking – by going to the other extreme and seeing how it feels. I kept track of my daily calorie intake (and I mean every. single. calorie.) and checked my weight once a week on Friday (specifically Friday mornings, because I might as well get the bonus points for an empty stomach, right?).

For calorie tracking, I used a tried-and-true app that most people are familiar with called MyFitnessPal. It’s simple enough to add foods and categorize them by meals, though the options can be limited, and homemade meals may vary from the standardized information in the app. The app puts some focus on what you are eating by alerting you if fat, sugar or sodium levels for the day are getting too high. The app also tracks your macros (carbs, fat and protein), but at the end of the day the focus remains on calories above all else.

I will say the app made it a little difficult to log workouts (especially HIIT and group classes) because it requires you to put in exercises one-by-one; I often found myself “cheating” but just saying I did “high impact aerobics” for 50 minutes, which seemed close to the amount of calories I’d lose in a class setting. Overall, for a free app, it does the trick.

Here’s what I learned after a few weeks. 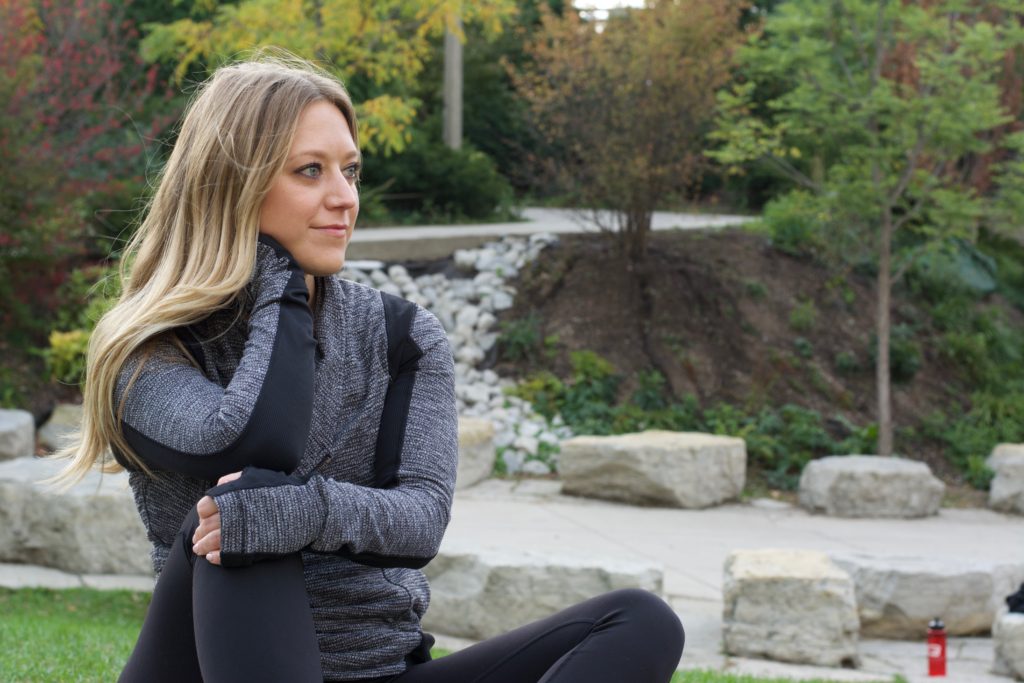 Calorie tracking made me realize how unconscious my food decisions truly are. As it turns out, I was such a mindless snacker – that is, I was until it no longer became mindless.

Wait, how many calories is a handful of peanut M&Ms? (Answer: more than I thought)

I’ve always given myself kudos for good food decisions during the week, but I didn’t realize how many little “extra” things I often forget about as I graze throughout the day. Not to say snacking is a bad thing; but I often found myself snacking unconsciously out of habit instead of hunger, or just because something was available and convenient. Calorie tracking really made me consciously decide: am I choosing to eat this because I want to or because I’m hungry? And if I’m not hungry, should I put it away or avoid it?

In the same vain, apparently the abundance of food is not my friend. When I was tracking calories, I realized that I was full and satisfied much earlier in meals that I expected to be. The truth is, if there is food in front of me, I usually keep eating it. I know that sounds ridiculous or simple, or like I’m some kind of animal, but it’s an unconscious habit. Calorie tracking helped me draw a hard line; I’m full, so even though there’s more available, I don’t need it.

Calorie tracking also made it easier to eat a little healthier. With some exceptions (we’ll get to those), I found myself drawn to healthier options; partially because of the lower calorie count. I ate more salads for lunch and more vegetables with dinner. I opted for lighter lunches.

Making it to the gym also became a higher priority when I was constantly staring at inputs and outputs of calories on my phone. Getting an extra 300-500 calories to “work with” on my app made my day a lot easier to plan and gave me a little wiggle room for an afternoon snack. Calorie tracking held me more accountable to fit workouts into my schedule.

On the flip side, calorie tracking also drew me back to foods I had previously given up – I drank a lot of Diet Coke and ate more foods with artificial sweeteners in them because they were low (or zero) calorie foods, even though they gave little-to-no nutritional value. I found myself avoiding high-calorie, high-fat foods like avocados, even though they were often nutritionally better decisions.

I also found myself cutting out calories during breakfast, because it was easy to grab a 100-calorie protein bar or drink some coffee and nix breakfast altogether. After a few days, I noticed my energy levels were much lower in the mornings. I was relying on caffeine to keep me going instead of calories from real food, which just wasn’t worth it.

On a Monday, I broke the golden rule. I just needed to step on the scale and peek to assess any weekend damage that I could have caused. That Monday slipped into checking on Wednesday, and suddenly my once-a-week rule became a once-a-day rule.

After a while, I found debating if I should just skip dinner to spare myself the effort… and the calories. And while fasting can be effective when done right, I knew it was not a good habit to develop in this way. I needed to let it go.

Over a few weeks, I lost around five pounds. I don’t know where those five pounds stand today (see: scale hiding in closet), but I’d imagine some found their way back to me.

Even though I’m not sticking to calorie tracking long-term, I did take a few things with me: first, I’m much better at recognizing mindless snacking and stopping it in its tracks. I’m also getting better about eating what I need and not going into excess, and I continue to develop a more stable fitness routine.

I will forever be seeking out the right balance, but at least for now, it won’t involve tracking my calories every day or stepping on a scale.