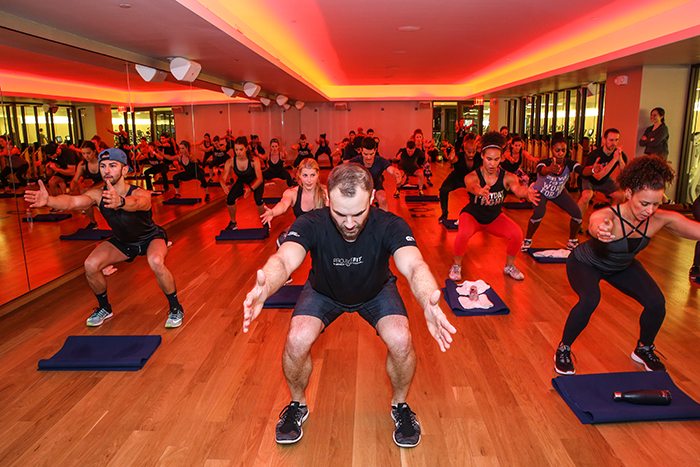 Mindfulness is the latest thing that wellness experts are asking you to spend your time on, and for most busy professionals finding spare minutes to do yet another thing in the day can seem impossible.

Equinox seeks to solve that problem with its latest class to launch on the schedule in New York, Los Angeles, London, San Francisco and Chicago.

Headstrong is the ultimate multi-task. This brain and body workout was launched by Equinox to meet the needs of its busy clientelle who are fighting to stay mentally sharp despite the stress in their lives. Co-created by Equinox employees, Michael Gervais and Kai Karlstrom, this class is a fascinating mix of kinesiology and social psychology brought to life.

In the four sections of class – focus, adapt, willpower and reboot – these are just some scientific elements I saw come to life when I stopped in for a preview.

Using something you value to de-clutter a stressed mind

In the first section of class, focus, Karlstom implored everyone in the room to think of something they value. It took me a beat to choose “team,” but as soon as I got the word in my head he explained why a value would be so important to us in this class. He stated, “thinking of a value can help you work harder.”

It turns out that thinking of a value, a basic self-affirmation exercise, can act to help chronically-stressed people to perform better as well.

That’s a science-y way of describing the theory of how we all acquire movement. The theory itself is fairly complex if you’re not a student of Kinesiology like Karlstom, but how it was applied in the class is the interesting part.

During the adapt portion of the class, rather than stating the name of an exercise that participants were already familiar with, like woodchopper or renegade row, Karlstrom just said, “row the boat” and “pick it up and drop it.”

Karlstrom said that this helps to execute an exercise in a new and unfamiliar way. This newness creates new connections in the brain and Neuroplasticity, which is “the brain’s ability to reorganize itself by forming new neural connections throughout life,” according to MedicineNet.

During the willpower section of class, a lack of time-limits on exercises, red lights and constant cueing from the instructor all served a purpose. We were doing higher intensity exercises all meant to do one thing: Generate BDNF, a protein which some have dubbed a Miracle-Gro for the brain.

Explored further in the book Spark: The Revolutionary New Science of Exercise and the Brain, exercise – specifically the higher-intensity type – helps the brain to function at a higher level.

We’ve talked about Amy Cuddy’s work and TED talk on power posing, but before taking this class, I’d never actually done a power pose. During the final section of class, after coming out of a savasana pose, everyone in the room stood in a power pose feet wide and strong with arms outstretched victoriously. We held that pose and remembered the thing that we valued.

According to Cuddy, “standing in a posture of confidence, even when we don’t feel confident — can affect testosterone and cortisol levels in the brain, and might even have an impact on our chances for success.”

If all of the science is right, this class could be your at-work performance-enhancing drug. Want to try it for yourself? You can take the class as a part of our upcoming #SweatworkingWeek June 6-12 with either the unlimited ticket or a drop-in to the June 8 class at 7:30 am.