What’s Wrong with Our Selfie-Centered Society? 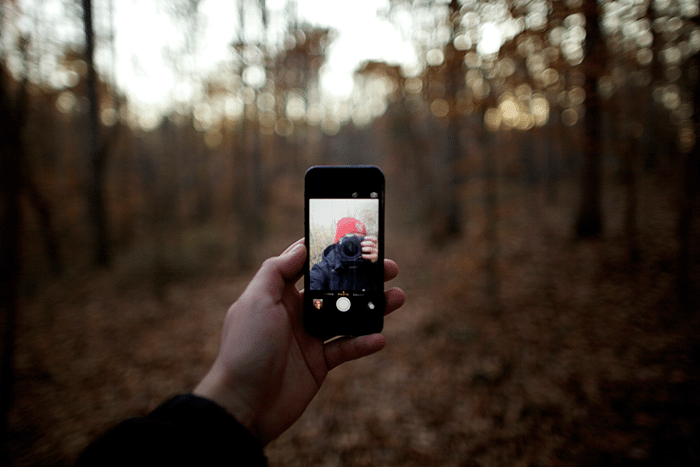 After arriving at Miami’s Fontainebleau hotel and unpacking my suitcase, I noticed an unusual item perched on a shelf in the mini bar: a selfie stick. I laughed, considering momentarily how interesting it is that a device used to enable taking pictures of one’s self is so commonplace, it is provided in every room in the hotel.

Once I entered the hotel’s pool area, I understood. While most of the people I saw didn’t actually use a selfie stick, I did witness a lot of selfies in action.

Social media — especially Snapchat, Instagram and Facebook — has made virtually all of us guilty of taking photos of ourselves, probably a lot more than we would if we didn’t have the platforms to share them. However, the degree of shamelessness I observed in Miami was at a whole new level.

Girls stood huddled together at the edge of a pool, pouting their lips at the camera. A guy held a fruity cocktail, equipped with a sliced orange and mini umbrella, flashing Blue Steel at his iPhone. A middle-aged man repeatedly searched for the best angle for his selfie while lounging in a chair.

There are two main concerns when it comes to selfies. First, they have the potential to both hyperinflate people’s egos or destroy self-esteem. The other concern is our selfie-obsessed society is saturated in narcissism.

A timely example of the first area of worry spurred by our society’s proclivity for selfies and self-promotion on social media comes from Australian Instagram model Essena O’Neill, age 18. According to The Guardian, O’Neill said she was able to easily charge $2,000 AUD per sponsored post to her 612,000 Instagram followers.

However, after a “crisis of conscience,” as it was described by US Magazine, O’Neill seemingly became fed up with the superficiality of the social media platform. On Oct. 27 she deleted more than 2,000 of her Instagram posts “that served no real purpose other than self-promotion,” and radically edited the captions of the remaining 96 posts on her profile to “reveal the manipulation, mundanity and even insecurity behind them,” according to The Guardian.

Although O’Neil’s rewritten captions don’t really reveal any groundbreaking news (most Instagram users are aware influencers get paid to post on behalf of certain brands or products) many of her remarks on the pressure she felt to look absolutely perfect, skinny and happy — and how destructive that was to her emotionally — underscore the concern that selfies create new space for insecurity and self-consciousness, especially about body image. For people who seek validation through “likes” on social media, selfies can be harmful.

The other major concern with selfies has to do with how they represent us as a society.

In 2013, Geoff Nunberg, PhD, a linguist and adjunct professor at UC Berkeley’s School of Information, as well as a contributor on NPR’s Fresh Air with Terry Gross, named “selfie” the word of the year.

He wrote in NPR, “For a recent fad, selfies have unleashed a torrent of portentous yammer and invective. The word imputes an aura of narcissism to whatever it’s attached to, whether it’s apt or not.” Dr. Nunberg further cites a New York Times columnist who said selfies “[symbolize] the global calamity of Western decline.”

Pointing fingers at selfies as the culprit responsible for the downfall of Western culture may be an overstatement. It is also fair to point out people have always taken pictures of themselves, they just might have used a camera timer in the past. Now, a lens on the front of our smartphones simply makes the task easier.

However, many argue when you examine selfies more closely, they could indicate a larger social problem.

Who are the faces (too literal?) or icons of selfies? Those likely to come to mind are probably named Kardashian or Jenner. Kim Kardashian, the selfie queen, published a collection of hundreds of selfies in her book Selfish. The book went on sale in May. Five-hundred copies of a limited edition of the book signed by Kim sold out on Gilt.com in just one minute in April.

Why are so many people interested in buying her book to look at hundreds of her selfies? Why would anyone be interested in looking at anyone’s selfies? Why the heck do we take so many of them? After all, the majority of selfies people take merely capture the banal, mundane events of our daily lives, probably enhanced with an artificial filter.

It’s easy to think of selfies as signals of the worsening self-obsession and narcissism of contemporary society.

Look at the dinner I made last night. Look at the cocktail I just ordered. Look at my new pair of shoes. Look at ME! Are our selfies and obsession with capturing and sharing the trivial happenings of our everyday existence a sign that something is deeply wrong?

Many people would say “yes.” Certainly, the people I observed in Miami posing around the pool were eager for attention among their “friends” on social media. To that end, the selfie effectively represents all of the deleterious elements of social media: “oversharing, incessant distraction, fragmented identity, low self-esteem and anything else that ails the culture,” according to Dr. Nunberg.

At the same time, Dr. Nunberg notes in defense of selfies, “we have a penchant for diagnosing narcissism where other ages would have seen nothing more than old-fashioned vanity.”

On the opposite end of the spectrum, there exists a less disdainful, actually poignant connotation of selfies when “nobler” people take them. When NASA astronaut Scott Kelly tweeted selfies aboard the International Space Station in June, or when the Danish prime minister took one with President Obama and David Cameron at the memorial ceremony for Nelson Mandela, or when a young man named Tom White took a selfie with Paul McCartney and Warren Buffett eating ice cream in the background — we aren’t as quick to judge.

In the end, I think the lesson to be learned is that there are different kinds of selfies, and while one silly picture among millions is not going to bring down society, it is worth considering our intentions before we post. Are we simply craving attention and social re-affirmation? Or is there any greater significance to the picture? Social media is an important outlet because it gives everyone the chance to express themselves however they’d like, but I don’t think it hurts to do so with a little bit more care and consideration.